'It's Bandidos that got killed' 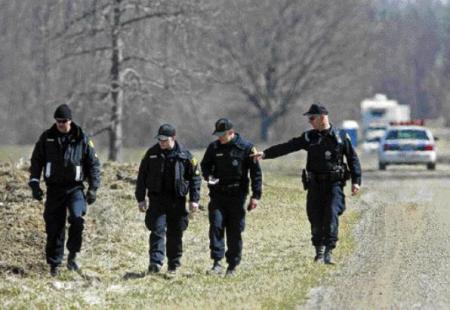 OPP officers conduct a sweep yesterday in the area of the worst mass killing in Ontario history, after the bodies of eight men were discovered in abandoned vehicles in a farm field outside Shedden, a rural hamlet southwest of London. Police said the victims were from outside the area, which has a history of violence involving biker gangs.

SHEDDEN, Ont. - An entire outlaw biker crew, a small chapter of the Bandidos, was reported missing on the streets of Toronto yesterday as detectives working to solve the worst mass killing in Ontario history paid a visit to the nearby home of a fellow biker, hoping to retrace the final hours of the eight men slain and dumped in this once quiet community.

Though police at the scene -- including Ontario's anti-biker unit -- said little publicly, associates and members of the world's second most powerful biker gang were exchanging online sympathies and making phone calls into the night, as a far away as Germany, to find out why their brothers died.

"I can tell you that it's Bandidos that got killed," said Ed Winterhalder, who left the gang in 2003 and wrote Out in Bad Standings, a book on his time inside the gang.

In a statement to the Citizen, the gang's rival, Hells Angels, said they had absolutely nothing to do with the mass murder and would be vindicated despite reports to the contrary.

The outlaw bikers gone missing and presumed dead were originally members of The Loners, a gang scattered across southern Ontario. Half of their members patched over to the Hells Angels in late 2000, which was part of a mass defection across Ontario led by a Ottawa-based Hells Angel Paul "Sasquatch" Porter.

But half the gang didn't want to join Hells Angels, one of the largest crime corporations in the world. Instead, they were courted over four months by a prominent U.S. Bandido to join his club. After a lot of visits, the patchover to the Bandidos was hatched in a Toronto coffee shop.

"We wanted those guys because they were legal and we need guys who are employed," said Mr. Winterhalder, who led the gang's expansion into Canada in January 2001.

Mr. Winterhalder said he would be shocked if Hells Angels Toronto were behind the killings.

Some of the cars found in the farmer's field are linked to outlaw bikers, and Bandido members expressed sympathy last night on the Internet.

The bikers gone missing and presumed dead joined the Bandidos in May 2001, months after the other half of The Loners were absorbed by the Hells Angels.

It created a rivalry instantly, though there were no tit-for-tat killings like the ones that unfolded in Quebec's biker war in the 1990s.

"The Hells Angels Motorcycle Club, or any of its members, are not involved in this crime in any way shape or form. Newspaper reports and speculation to the contrary, will be proved completely wrong, in the coming days," Hells Angels Toronto told the Citizen last night.

Ontario Provincial Police refused to confirm whether the victims were tied to organized crime.

"Until we have the victims positively identified and the cause of death properly established we're not going to comment on any affiliation," said Det.-Supt. Ross Bingley, head of the OPP's Criminal Investigation Branch.

Police released few details, saying only the men all knew each other and were from the Greater Toronto Area.

"We have an understanding of who some of the victims are," Det.-Supt. Bingley told dozens of reporters gathered on the isolated dirt road where a farmer and his wife discovered the bodies in and around four vehicles at 8:30 a.m Saturday.

"We're in that process right now (of identifying them) and until that positive identification has been made we won't be releasing any names."

A second roadblock was set up less than 10 kilometres away from where the eight bodies were found Saturday.

Several police cars went to the home of Wayne Kellestine -- the former president of the Annihilators, and later the Loners in St. Thomas, Ont., -- who survived an assassination attempt in 1999.

Det.-Insp. Don Bell, head of the OPP-led Biker Enforcement Unit, confirmed that police motorcycle gang specialists are involved in the investigation, but would not say to what extent.

"Investigators have reached out for expertise in a number of areas," he said.

"Given the nature of the case, it is very prudent that we move slowly," he said.

The victims' connection to Toronto was one of the few pieces of information to trickle out through official channels on a day when even the father of a man whose sport utility vehicle was discovered at the scene could not find out what had happened to his son.

"Yes, it has been a very difficult day," said the father, who learned when the National Post phoned him yesterday morning that a 2003 silver Infiniti FX registered to his adult son had been found in a woodlot at the scene of the massacre, about 25 kilometres southwest of London, Ont.

Newspapers ran aerial photos of the Infiniti with its hatch open. One of the victims, a heavyset man clad in striped pajama bottoms, was pictured lying in the back.

"Now I have to wait until there's been identification of the eight victims," the father said.

After he was contacted by the Post, the father phoned OPP and gave a written statement.

He was unable to reach his son yesterday.

The Post agreed not to release the name of the father or son, pending identification of the victim.

Another vehicle discovered at the scene was a grey 2006 Pontiac Grand Prix. The Pontiac was rented in Toronto from Avis on March 16 and was due to be returned today.

The rental was in the name of Tara Stolarski, who lives in Milton, Ont.

Ms. Stolarski did not return calls yesterday. But a source close to the family said Ms. Stolarski's boyfriend is missing.

"He hasn't been heard of. We're not really sure," the source said. "She doesn't really know anything, other than what she's heard on the news."

The source said the police had not contacted the family by yesterday afternoon.

"Until they do, we don't know anything."

Also found at the scene was a tow truck registered to Superior Towing in Etobicoke, with a silver Volkswagen Golf attached to the back.

George Jesso, a Toronto-area man in his late 50s or early 60s, is believed to be the driver of the tow truck, said Cindy Stunden, owner of First Image Towing in Toronto, who knew Mr. Jesso through the industry.

Danny Creatura, manager of Superior Towing in Toronto, confirmed last night that Mr. Jesso was a driver for his company, and hasn't been heard from since the bodies were discovered.

OPP would not confirm how many victims were in each vehicle.

They also would not say how the men died or whether they had been killed at the scene or elsewhere.

"Obviously we're not used to having eight people at one homicide scene," said Det-Supt. Bingley.

Officers combed the scene all day Saturday. Then, under cover of darkness, around 10:30 p.m., an OPP transport truck arrived to begin removing the vehicles, the bodies still inside, from the road and the woodlot.

Det-Supt. Bingley said the bodies were to be taken to the Ontario Coroner's office in Toronto, while the cars would be sent to OPP headquarters in Orillia for detailed analysis.

Toronto West regional coroner Dr. David Evans confirmed that the bodies were in the city and that post-mortem examinations would take place today, but he refused to discuss what condition they were in.

"It's going to take a bit of time -- it may take all day and sometime into the evening to have it all completed."

The woodlot and cornfield where the bodies were found belongs to Mary and Russell Steele and is located just off Highway 401.

Shedden, Ont., a hamlet of approximately 270 people, is a quiet farming community known as the rhubarb capital of Canada where residents know each other's vehicles and keep an eye on each other's properties.

"We were just blown away," said Charlene Armstrong, 41, who lives about a kilometre west of the Steele property.

Still, she added, residents felt sure the mass killing originated outside the community.

"We knew it had to be from a bigger city."

Chris Mathers, a Toronto crime and security consultant, said there's little doubt that organized crime in some form had something to do with the killings, though it's still too early to say whether biker gangs were involved.

"This isn't a dispute between the 4-H Club or the Lions or the Masons," Mr. Mathers said. "Who else in the world settles disputes in this fashion?"

Word from police that the victims all knew each other and all came from the Greater Toronto Area did little to assuage residents' concerns that their community had once again been breached by the urban blight of violent crime.

"We went through this a few years ago with the bikers there, just west of us," said Joan Giles, 74.

In separate incidents in 1994 and 1998, the bodies of a man and a woman were found dumped in county fields. Both had been beaten to death, and neither of the murders were ever solved.

In October 1999, Mr. Kellestine himself was wounded in a shootout near Highway 401, apparently the result of a rift inside one of the gangs.

"That's the first thing I thought about," Ms. Giles said. "What surprises me is they picked our little town here to do what they did."

Andrew Hilton, a spokesman for Community Safety Minister Monte Kwinter, said the ministry would not discuss what he called a "very tragic, very horrific" case because the investigation remains at an operational stage.

"Obviously we're monitoring, but we have no comment," Mr. Hilton said.