The case of Fen MacIntosh, being heard Monday before the Supreme Court, raises questions about Canada’s system of bringing alleged sexual predators to justice. 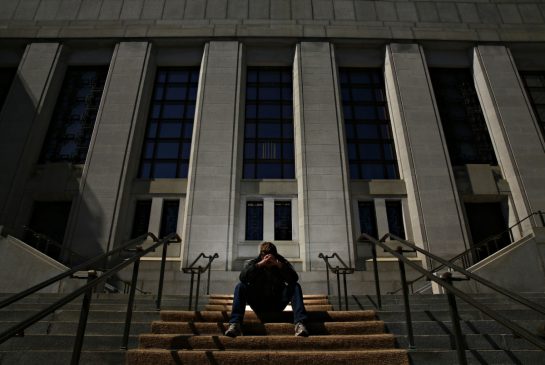 Child sexual abuse victim D.R.S., whose identity is under a publication ban, sits on the steps of the Supreme Court in Ottawa on Sunday. D.R.S. first came forward to police in 1995 with allegations of abuse against Ernest Fenwick MacIntosh dating back to the 1970s. He is dubious that the Supreme Court, which is hearing the case beginning Monday, will be more help to him and others who have made these accusations than the rest of the justice system has been.

By: Julian Sher and Robert Cribb Staff reporters, Published on Mon Apr 22 2013
For 18 years, allegations of sexual abuse have swirled around Ernest Fenwick MacIntosh, levelled by a group of men who say the Nova Scotia businessman repeatedly molested them when they were young teens in small-town Cape Breton.
On Monday, after a long-delayed extradition from India, two convictions in Nova Scotia on 17 counts of sexual abuse (later overturned by a provincial court) and a litany of questions about why it all took so long, the case of “Fen” MacIntosh will be heard by the Supreme Court of Canada.
The Star investigates child sex tourism
For much of the nearly two decades since allegations first emerged against him, MacIntosh, now 69, has lived the life of an international jet-setter. Based in India between 1994 and 2007, he worked as a manager for a telecommunications company and successfully renewed his Canadian passport twice despite being a wanted man in Canada, where his name was on a countrywide arrest warrant.
To those who allege he destroyed lives through predatory abuse, the sequence of events that kept MacIntosh out of Canadian courts for so long represent a scathing indictment of the country’s justice system.
“When it comes to going after sex offenders and protecting children, Canada is a complete laughing stock,” says D.R.S., as he is identified in court documents, his identity protected by a court publication ban.
It was 1995 when D.R.S. first came forward to police with allegations of abuse by MacIntosh dating back to the 1970s, and he has remained a tireless advocate for MacIntosh’s arrest and prosecution.
“I did my part coming forward as a victim,” he says. “But I’m tired of holding the damn torch in my hand.”
MacIntosh, now living in Halifax after being extradited to Canada in 2007, declined an interview request from the Star.
His lawyer agrees with critics who say it took a long time for police and prosecutors to take action against his client, but for different reasons.
“What I would take from the fact that the Crown took . . . years to do anything with the file is not that Canadian sex offenders can wander throughout the world , but they didn’t size this up as being a case with much merit,” says Brian Casey, a veteran Nova Scotia criminal lawyer.
The narrow legal issue before the Supreme Court focuses on the Charter right “to be tried within a reasonable time” and who shoulders the blame for the endless delays in MacIntosh’s case: the authorities or the accused himself.
But for child rights advocates, the MacIntosh case illustrates wider problems of bureaucratic bungling and incompetence in cracking down on Canadians abroad who have been accused of serious sex offences at home .
Roz Prober, president and co-founder of Beyond Borders , is calling for a public inquiry into how MacIntosh was able to renew his passport in 1997 and again in 2002 — instances in which the Canadian government effectively assisted a fugitive from justice, she says.
“The disconnect in these (government) departments is amazing,” Prober said. “The right hand has no idea what the left hand is doing. I would characterize this as the system gone insane and a nightmare for victims.”
A Star investigative series recently exposed similar loopholes in the system designed to monitor sex offenders who have already been convicted and served their time, making it relatively easy for them to travel abroad to exploit children.
MacIntosh’s decades-long legal saga illustrates other loopholes and failings in the system.
MacIntosh was a sex offender long before the allegations now before the Supreme Court were first alleged; he was convicted twice, in 1983 and 1984, on charges involving teenage males who were above the age of the consent of 16 at the time.
His lawyer said in an interview that MacIntosh, “either misunderstood or was blind to the absence of the complete consent” of the teens involved and he received a suspended sentence in one case and a fine in the other.
A decade later, in December 1995, MacIntosh was charged with sexually abusing a minor by the RCMP in Nova Scotia after D.R.S. came forward with allegations MacIntosh had molested him when he was a child in Port Hawkesbury in the early 1970s.
Soon after, the RCMP discovered that MacIntosh had left for India the previous year.
But what should have been a simple case of returning a citizen overseas to face criminal charges in a Canadian court spiralled into a decade of fumbles, confusion and mishaps.
A warrant for MacIntosh’s arrest was issued on Feb. 21, 1996.

“Mr. MacIntosh advised that he had no intention of returning to Canada,” Const. Donald Joseph Deveau recounted in a sworn affidavit of an August 1996 phone call he had with MacIntosh in India. “I advised Mr. MacIntosh there was a warrant for his arrest.”

MacIntosh disputes that, arguing in his Supreme Court response that the phone line was cut off before the conversation ended and the Mountie did not give him the details of the charges or mention the arrest warrant.
A little more than a year later, in May 1997, MacIntosh walked into the Canadian High Commission in New Delhi and got his passport renewed without any problem.
Six months after that, Gar Pardy, then the director general of consular affairs for the Canadian Department of Foreign Affairs, picked up the phone in his Ottawa office.
D.R.S., the original complainant, was on the line, upset at the slow pace of action against MacIntosh.
Pardy began looking into the file and discovered MacIntosh wasn’t on the Passport Control List, an internal security tool containing information from Canadian law enforcement organizations that embassy staff use to flag applicants requiring in-depth review.

“The transfer of information from police forces is not as tight as we would like to think it is,” he said.

At Pardy’s urging, the federal passport office informed MacIntosh in India that his passport was cancelled and no longer valid.

“Without a valid passport, we assumed the Indians would kick him out,” Pardy said.
That didn’t happen.
MacIntosh hired a lawyer in Ottawa who went to federal court on his behalf to appeal the revocation in early 1998.
That’s when federal Crown prosecutors made a fundamental misstep that would have lasting repercussions, says Pardy.
They failed to present the judge with the evidence of MacIntosh’s charges, for reasons that Pardy — and MacIntosh’s alleged victims interviewed by the Star — don’t understand to this day.
Instead, a deal was struck in April 1998 that overturned MacIntosh’s passport revocation.
“The people charged with the responsibilities in this area have not measured up,” says Pardy.

In 2000, four more men came forward to accuse MacIntosh of sex crimes when they were younger; two more lodged complaints in 2001.

R.M.M., one of those complainants who also cannot be identified, says he was sexually abused between the ages of 14 and 15, a time when his parents were separating and he was vulnerable to MacIntosh’s sudden interest in him.
“I blame the lawyers, the government of the day, the passport office,” he told the Star last week. “It’s just a mess. He fell through a lot of cracks.”
By December 2001, according to the Crown’s Supreme Court filing, MacIntosh faced 37 counts of sexual abuse allegations against both minors and young adults — and a flood of new arrest warrants.
Yet, just a few months later, MacIntosh again received a quick and easy renewal of his passport in Delhi as he had five years earlier.
It is not clear how or why, in the face of a flurry of new criminal charges, that happened.
Federal regulations clearly state that “Passport Canada may refuse to issue a passport to an applicant who … stands charged in Canada with the commission of an indictable offence.”
Passport Canada refused to discuss the specifics of the MacIntosh case citing privacy reasons.
Spokesperson Béatrice Fénelon says that only beginning in 2004 did the department gain access to the Canadian Police Information Centre database as part of its security reviews for passport applications.
If officials who renewed MacIntosh’s passport in 2002 had such access, presumably his more than three dozen charges would have been easily accessible.

During his time in India, it was never hard for authorities to find MacIntosh.

According to his Supreme Court brief, MacIntosh “lived openly under his own name in New Delhi, three blocks from a regular member of the RCMP stationed in India as a liaison officer.”
“To the knowledge of the RCMP and the Crown, MacIntosh travelled back and forth [to Canada] using his Canadian passport,” his court filing says.
Casey says MacIntosh, like many expats, was a frequent guest at the Canadian High Commission, enjoying the facilities.
“He was there regularly to use their pool for his entire time in New Delhi,” Casey told the Star. “It’s pretty hard to say he is hiding out.”
It was not until July 2006, more than a decade after the RCMP had first located him in India, that Canadian officials finally made a formal request to Indian authorities for his extradition.
Indian police arrested MacIntosh on April 5, 2007, and he was deported back to Canada two months later.

But the Nova Scotia Court of Appeal struck down the convictions, in part on the grounds of “unreasonable delay” and also questioned the reliability of some of the evidence by the victims in one of the trials.

In today’s hearing in Ottawa, the Nova Scotia Crown — supported by the Attorney General of Canada — will argue that MacIntosh can hardly blame the government for taking its time to bring him to trial since he knew of the sex offence charges against him at least since 1998, yet stayed in India until forced home by extradition.
His lawyer says that after MacIntosh had his “little flap” with Passport Canada in 1998, he assumed the charges against him had been dismissed.
“When he got the green light from the Passport Office, he didn’t think anymore of it,” Casey said.

Casey said MacIntosh has been without work since his return to Canada and his legal battles have swallowed his life savings.

D.R.S. and others who have made those accusations of child molestation are dispirited, dubious that the Supreme Court will be any more helpful to them than the rest of the justice system.

“I have no confidence this will be successful,” he said. “Eighteen years of waiting, waiting and more waiting has taken its toll on myself and many others. I want answers as to who helped MacIntosh.”
Former director general of consular affairs Pardy says regardless how the Supreme Court rules, the government has failed in representing alleged victims of sexual abuse.
“Sometimes I don’t think there’s any pavement in Ottawa. It’s all cracks.”