Nicole Doucet is an allegedly terrorized woman who was acquitted on charges of counselling to commit murder, after she’d been caught on tape in 2008 trying to hire an RCMP undercover agent to kill her estranged husband.

The dangerous expansion of 'battered woman defence' in Canadian law

On the afternoon of Easter Sunday, 1911, an Italian immigrant named Pietro Napolitano commanded his six-months pregnant wife, Angelina, to sell her body on the streets of Sault Ste. Marie, Ont. If she didn’t come back with money by the time he’d woken from his nap, Pietro warned, he would beat her severely.

It was a credible threat: Pietro already had seriously disfigured Angelina’s face and upper body in a multiple-stabbing attack six months previous.

Unwilling to endure further abuse and extortion, Angelina acted pre-emptively: While her husband slept, she took an axe and hacked him to death. Afterwards, she told a neighbour “I just killed a pig.”

I just killed a pig

At trial, Angelina’s court-appointed lawyer, Uriah McFadden, argued that Angelina was driven to the act by her husband’s cruelties — a defence strategy that was then unprecedented in recorded Canadian law. But the judge didn’t buy it: He ruled that “if anybody injured six months ago could give that as justification or excuse for slaying a person, it would be anarchy complete.”

ver time, however, the doctrine that Ms. McFadden had improvised in that Sault Ste. Marie courtroom in 1911 — now known as the “battered woman defence” — would become entrenched in our jurisprudence. In our own more enlightened times, a Canadian woman who endured the sort of monstrous behaviour meted out by Pietro Napolitano would have a good chance of a reduced sentence, and perhaps even outright acquittal.

But 102 years after the trial of Angelina Napolitano, a controversial case in Nova Scotia has prompted many Canadians to wonder whether the law has not swung too far in the other direction.

* Barbara Kay: Nicole Doucet is innocent, by reason of gender

* ‘Stain on the justice system’: Calls for inquiry into decision to clear teacher who hired hit man to kill husband

The protagonist here is Nicole Doucet, an allegedly terrorized woman who was acquitted on charges of counselling to commit murder, after she’d been caught on tape in 2008 trying to hire an RCMP undercover agent to kill her estranged husband, a man she later would describe at trial as a violent, sexually abusive rage-aholic.

In a judgment handed down earlier this year, the Supreme Court of Canada struck down Ms. Doucet’s acquittal for technical reasons pertaining to the legality of her defence claim of “duress” (Ms. Doucet had claimed, also, that she had resorted to the murder-for-hire scheme because she could not get the police to adequately protect her). But in the next breath, the Court also stayed all criminal proceedings against Ms. Doucet, largely on compassionate grounds.

“The abuse which she suffered at the hands of [husband Michael] Ryan took an enormous toll on her,” the Court concluded. The justices also castigated the local RCMP for failing to respond adequately to Mr. Ryan’s supposed “reign of terror,” and suggested that these police officers acted negligently in response to the desperate pleas of a long-suffering wife. Ms. Doucet is now a free woman: In effect, the “battered woman defence” worked.

The case represents a radical expansion of a legal doctrine that originally was created to help women trapped, cheek-by-jowl, in relationships with hyper-violent male predators. But unlike the Napolitanos, who shared the same bed, Nicole Doucet and Michael Ryan lived 180 km away from one another. And though the couple did have a turbulent relationship, the independent Commission for Public Complaints Against the RCMP released last week the findings of an investigation into Ms. Doucet’s claims regarding the police force’s unresponsiveness to her abuse reports. The commission confirmed just one instance where domestic abuse was reported: on November 23, 2007, Ms. Ryan phoned police to say Mr. Ryan was threatening to burn down her house (police located her estranged husband at his home, a two-hour drive away). The commission writes that on that occasion Ms. Doucet told police “that he [Mr. Ryan] had never hit her, but that he was verbally aggressive and manipulative.” In fact, Ms. Doucet repeatedly told police, and then a psychologist, that she hadn’t been brutalized by Mr. Ryan at all, and refused the offer of a protection order when the RCMP offered it.

Indeed, the drama in Ms. Doucet’s life seems largely to have involved her sporadically violent, emotionally dysfunctional relationship with her own father and sister. And the breakdown of her marriage with Mr. Ryan seems to have been precipitated mostly by a complex squabble involving competing claims on the house where she and Mr. Ryan had lived, as well as her jealousy of another woman whom Mr. Ryan began dating in 2007. Ms. Doucet’s first claims of having been brutalized by Mr. Ryan on a long-term basis seem to have materialized very suddenly, after an RCMP officer had explained to her in detail what sort of accusations she would have to put forward in order to precipitate her husband’s arrest.

Yet none of this was known to the trial court that acquitted Ms. Doucet in 2010, because prosecutors never bothered calling Mr. Ryan, or the RCMP officers who had been monitoring the relationship, to the witness stand. As a result, Ms. Doucet’s claims of abuse were not thoroughly contested at trial, and eventually found their way into the Supreme Court of Canada’s judgment. Thus did our country’s highest court create a precedent whereby a woman caught trying to arrange the murder of her estranged and geographically distant husband can be set free on the basis of unproven, and apparently dubious, claims of past domestic abuse.

According to some legal analysts, however, the Doucet case is actually just part of a larger trend in Canadian jurisprudence. 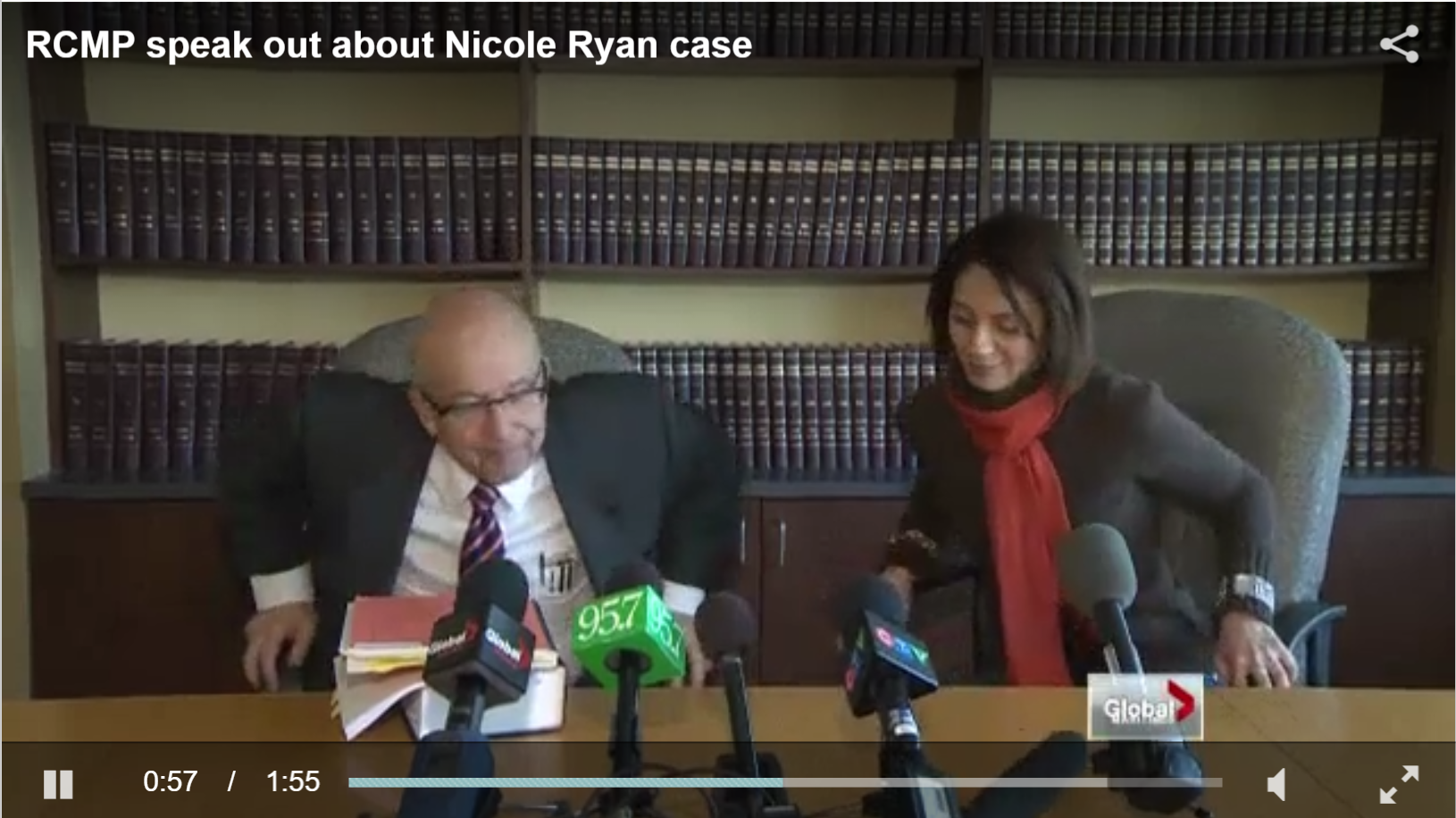 Nicole Doucet hiring a hit man, who was actually an RCMP officer.

“In the Doucet case, the claim of an ongoing pattern of spousal abuse was central to her defence,” says James Morton, a former president of the Ontario Bar Association. “So in theory, it should have been proven the way you would prove every other element, with solid evidence. But in reality, claims of past abuse typically are not proven with the same degree of rigour. It’s often merely asserted, and the person whom the allegation is made against has to disprove it. The burden of proof is effectively reversed.”

“It’s in family law cases where you see this a lot,” he adds. “As a practical matter, once the allegation is made by the woman — and it’s usually the woman, though not always — the burden is on the other side, the man, to disprove it. And how do you do that? How do you disprove something that happened months or years ago — stuff that was never complained about at the time?”

Grant Brown, a retired lawyer and professor who is now a men’s-rights activist, traces the roots of the Doucet decision to a bias against men that he believes is now encoded deep in the Canadian justice system.

“In the 1960s, domestic violence was viewed by the authorities as mostly a ‘private’ issue, or a family matter, except in extreme cases — brothers, fathers, uncles, and other male relatives were expected to ‘sort out’ husbands who abused their wives,” Mr. Brown told me in an email. “But as families became smaller and more spread out geographically, that system no longer worked very well, if it ever did. Consciousness-raising by women’s-rights proponents brought [it] to the fore in the 1970s.” That was following the Royal Commission on the Status of Women in Canada, when Canadian universities began introducing women’s-studies departments, and when women’s shelters began opening in Canadian cities. 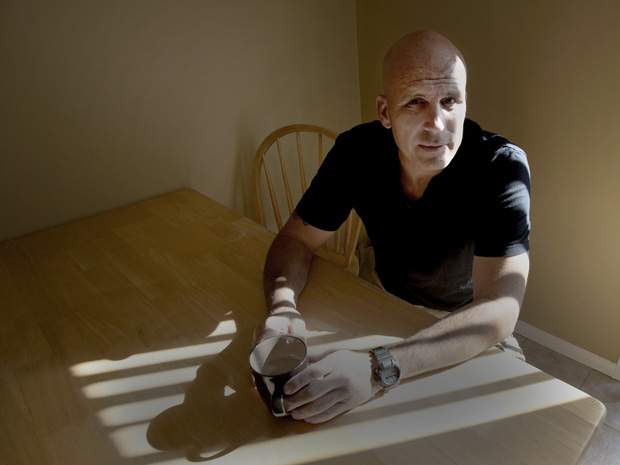 Michael Ryan at his Angus, Ont.home, Wednesday June 19, 2013. Ryan's former wife tried to have him murdered but was then acquitted of the crime, because she accused him of domestic violence

“Nobody wanted to look as though they were not sympathetic toward women, and it became anathema for any politician or judge or police officer to question the [feminist point of view] in this area,” Mr. Brown says. “Whereas every other aspect of the criminal-justice system strives to eliminate false [accusations of guilt], when it comes to domestic violence, the reverse [has become] the case.”

The problem for policy-makers is that any move to tighten up the evidentiary requirements on domestic abuse would be construed by some as an attempt to protect abusive spouses from prosecution. Moreover, it is true, as many activists are quick to point out, that genuine victims of domestic abuse often do change their stories for all sorts of complicated reasons.

“Battered women are overwhelmingly more likely to recant — take back their previous allegations of abuse — than they are to fabricate abuse,” says University of Ottawa law professor Elizabeth Sheehy, whose forthcoming book, Defending Battered Women on Trial, examines the testimony of women accused of killing abusive male partners. “It is well known that battered women recant out of fear, threats, anxiety about being believed, unwillingness to be cross-examined, and [having] their lives and humiliating treatment exposed.”

It is well known that battered women recant out of fear

In many cases, a battered woman most fears that her claims will not be believed and their abusers assure them that no one will, Ms. Sheehy adds. “In [the Doucet] case, a judge did believe her, [and so] it is very discouraging to see her being retried in the media.”

Mr. Morton emphasizes that it is important to take seriously ongoing family violence. “I have dealt with plenty of cases involving people who really are just plain nasty folks who do beat their spouses, and these people should not have custody of their kids,” he says. “But before we [assume the guilt of] these people, we have to be very sure they actually did it, and that it’s not just an allegation.”

Ultimately, as Mr. Morton sees it, the only way to achieve balance in this area is through legislative intervention. Specifically, he would support amendments to the Canada Evidence Act that more tightly circumscribe the admissibility of previous episodes of domestic abuse. While he believes that such a legal change would face an uphill battle in Ottawa, outrage over the Doucet case might well provide legislators with the political cover they need.

No one wants to turn the clock back to the day when a Canadian judge could throw the book at a long-suffering woman such as Angelina Napolitano. But in light of the Doucet case, we should be equally carful about letting the law slide into what a Sault Ste. Marie judge famously described, 102 years ago, as “anarchy complete.”

Fathers across Canada live in terror of female terrorists like Nicole Doucet who are encouraged by our Governments who believe in women having a licence to kill men.