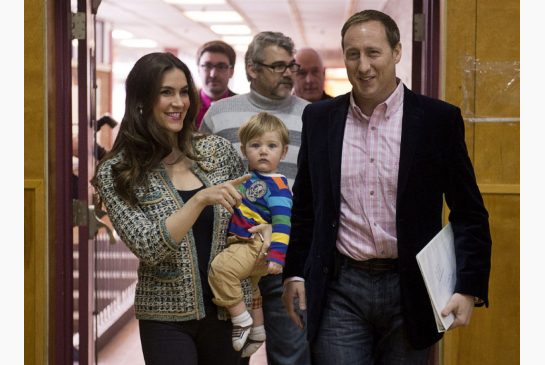 By: The Canadian Press, Published on Thu Jan 09 2014
HALIFAX—The federal government is spending $4 million on a television and Internet advertising campaign to raise awareness about cyberbullying and the looming legal consequences of using intimate images to torment people online.
Justice Minister Peter MacKay said the Stop Hating Online campaign, launched Thursday at a school in Halifax, will begin by explaining to parents how cyberbullying can cross the line into criminal activity.
“This is about awareness,” he said in an interview. “It’s about outreach and empowering young people to take responsibility for their actions and understanding the consequences of hitting ‘send.’ ”
Next month, a second phase of the campaign will encourage youth to take action against cyberbullying.
The federal government introduced a bill in November that would make it illegal to distribute “intimate images” without the consent of the person depicted. The legislation would also give courts the power to seize computers, cellphones and other devices used in an offence, and help victims recoup part of the cost of removing the images from the Internet.
The bill applies to adults and young people alike who become targets for online harassment.
When he tabled the bill, MacKay said Canadians had been moved by a number of recent cyberbullying suicides, including the death of Rehtaeh Parsons, the 17-year-old Halifax girl who died in April after trying to kill herself.
Her family alleges she was sexually assaulted by four boys in November 2011 and that a digital photo of the incident was passed around her school, prompting months of harassment through social media.
The RCMP looked into the allegations but initially concluded there were no grounds to lay charges. However, they later reopened the case after receiving new information, then charged two teens in August with creating and distributing child pornography.
Soon after the parents of Parsons made her suicide a public issue, Prime Minister Stephen Harper stood in the House of Commons and said: “We absolutely must speak out against the notion that some people have that ‘anything goes’ on the Internet.”
The issue quickly became part of the Conservative government’s high-profile law-and-order agenda.
MacKay said Harper, the father of two teenagers, had taken a keen interest in stamping out cyberbullying.
“I’ve noticed that he does become quite emotional, maudlin about this,” MacKay said. “He becomes very introspective when it comes to the impact that it has on someone’s life.”

Peter McKay is a Father, and perhaps he needs to have some empathy for the children in Ontario who are systematically removed from the care of fathers and placed with the most violent of mothers by Ontario's Criminal Cartel of Children's Aid Societies.

Peter McKay needs to sit down, shut his eyes, and imagine having a Rotten Cop like Detective Peter Van Der Zander Fabricate Evidence to take his son out of his care or contact with him permanently.

Peter McKay needs to consider how he would feel if a Rotten Corrupt Judge like Timothy Minemma personally Fabricated Evidence to take his son away from him and put him the care of the Children's Aid Society of Ottawa.

Peter McKay is the Minister of a Justice Department that does not give a dam about Justice.

Our Judicial Council is a mockery of justice. It supports and promotes Criminal Offences by the Judiciary like Tim Minemma, a former member of the Na.zi sympathizing Dutch Reform Church and even worse, a former lawyer for the Children's Aid Society, the Kingston branch of the Ontario Criminal Cartel.

Of Course nothing like that could ever happen to Peter McKay now, could it.


When is Peter McKay going to Act to deal with Ontario's Billions of Dollars spent on it's Criminals who habitually fabricate evidence and Rubber Stamp "judicial decisions" without hearings, without notice, Exparte and of course, devoid of any due process.