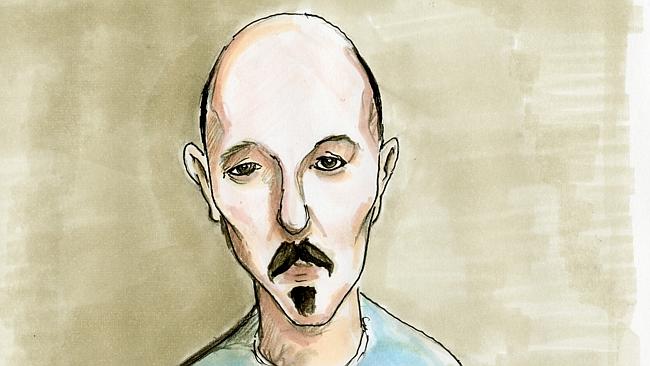 Artist’s sketch of Mark Christopher Harvey during his November 2012 appearance in the Port Adelaide Magistrates Court.

THE child care worker who sparked the Education Department sex abuse scandal is a paedophile who abused his position to hide his deviancy in plain sight, a court has heard.

Today, he stood trial in the District Court charged with the persistent sexual exploitation of four girls prior to that crime.

In his opening address, prosecutor Mark Norman, SC, said Harvey had touched the girls, aged between five and eight, bit their toes and even blindfolded them.

Mr Norman said Harvey was the director of an out of school hours care program, and so knew full well how inappropriate and unlawful his conduct was.

“Our case is that the accused is a paedophile with a foot fetish,” he said.

“The children adored him, they treated (his actions) as just another game, as something that Mr Harvey would do.”

“He was hiding in plain sight — he was getting sexual pleasure from touching the children and, in particular, biting their toes, and using his position to disguise it as innocent play.”

Harvey, 43, has pleaded not guilty to four counts of persistent sexual exploitation of a child allegedly committed between January 2007 and December 2011.

Those offences pre- and postdate his existing conviction over a sexual act involving a blindfolded child in December 2010.

Parents who used the OSCH service were not told of that offending until November 2012, sparking the Education Department sex abuse scandal.

Unrelated allegations against dozens of other teachers and child care workers came to light, and then-education minister Grace Portolesi was succeeded by Jennifer Rankine.

A subsequent inquiry, by retired Supreme Court Justice Bruce Debelle, produced a 280 page report with 43 recommendations about how alleged sex abuse should be handled by the Education Department .

Today, Mr Norman said that, under Harvey’s leadership, the OSCH program was “less structured” than others and rewarded children with lollies and physical contact.

He would sit with them in the TV room and single out “favoured” children to accompany him to a separate area to prepare fruit snacks for the group.

“It’s plain Harvey was conditioning the children to be accepting of his touch,” he said.

“(When preparing snacks) he knew it would be very unlikely he would be seen or disturbed.”

Mr Norman said Harvey would “play a taste-testing game” with select children, while they were blind-folded, usually by a tea towel.

He said that, during a conversation with another staff member, Harvey announced he would be playing a taste-testing game with the entire group.

“He was masking his intentions toward the children by admitting this taste-testing game existed,” he said.

“That would enable him, should he ever be taken to task about being alone with the children, to say he’d told people about it and it therefore must be innocent.”

Mr Norman said other staff became concerned when, during a vacation care excursion, Harvey let a distressed child sit in his lap in full view of the general public.

“Harvey did not deny it and said he was comforting the child and would continue to do so,” he said.

He said Harvey was formally cautioned over the incident, and so committed the offences knowing his behaviour was inappropriate.

Mr Norman said that, after December 2010 crime, the alleged victims of the current matter approached their parents and complained about Harvey.

During a subsequent interview, Harvey told police that letting children help him prepare snacks was “part of the children’s ownership” of the OSHC program.

He also conceded being “a big one for” physical interaction and that he was “trying to do the right thing, but it bit me on the ass in the long run”.

“This is an example of confession and avoidance,” Mr Norman said.

“He seeks to blame the children for this, or to at the very least categorise it as benign play.”

The trial, before Judge Michael Boylan in the absence of a jury, continues.