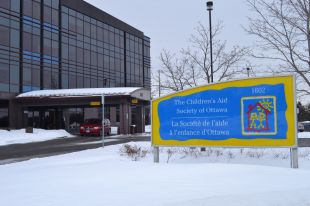 bomb threat at the Children's

Aid Society on Telesat Ct. The

call came in just before noon on March 14.

The call came in as a bomb threat at 11:42 a.m., said Constable Chuck Benoit.

"There had been an incident reported that there was a bomb in the building so we immediately evacuated and the police assessed the situation and it was a total false alarm," said executive director of the CAS Barbara MacKinnon.

MacKinnon said it was about an hour and a half before Ottawa Police and the bomb squad gave staff the all-clear to return back into the building.

MacKinnon is the front line representative of Ottawa's

Local lawyers in Ottawa refer to these criminal child abusers

and Fabricators of Evidence as "The Gestapo".