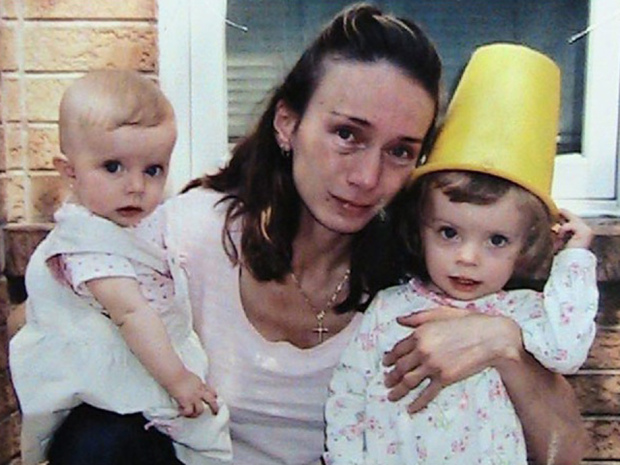 Elaine Campione is seen with her two daughters, left to right, Sophia, 19 months, and Serena, 3, in this undated photo.

It’s called “the chivalry hypothesis,” and as Dr. Rob Whitley says, what it suggests is that judges and journalists tend to portray men as villains and women as victims.

He’s one of the authors of a new McGill University study which looked at how Canadian newspapers describe mental illness and particularly if the chivalry hypothesis holds even when the women are “involved in violence or criminality.”

After examining 1,168 newspaper articles published over six months, the answer was pretty much a resounding yes, albeit with the usual academic qualifications.

Stories that depicted men with a definitive or alleged mental illness were more “stigmatizing” — they focused upon crime, danger and violence — while those about women were “significantly more likely to have recovery as a theme” and to focus upon background information such as mental health interventions.

“These articles more frequently portrayed women compassionately as victims of circumstances or passions beyond their control,” the authors wrote.

“However, this kind of background information was routinely lacking in articles about men, who were routinely portrayed in a more dismissive and contemptuous manner … portrayals of women appear to be more sympathetic and considered; more frequently being portrayed as ‘sad’.”

The finding is all the more interesting given that the study period coincided with two highly publicized cases of mentally ill women who were involved in crime or violence and much in the news — the trial of Elaine Campione, a Barrie, Ont., woman with depression who murdered her two children, and the coroner’s inquest into the prison death of teenager Ashley Smith, who had a long history of psychiatric issues.

The study landed a day or so before a Supreme Court of Canada decision that I see as loosely fitting into the same category.

Basically, that decision found that police records can’t be used against sex assault victims in court if the records aren’t specifically relevant to the case at hand.

At issue were a handful of Toronto Police occurrence reports involving one of two complainants in a case called R v Vincent Quesnelle.

These reports weren’t made in the course of the investigation against Quesnelle, who was convicted on June 3, 2010, of two particularly egregious attacks on that woman and another and sentenced the following month to six and a half years in prison.

The defence had argued that the records were relevant to the assessment of the woman’s credibility and that they weren’t the sort of records, such as those made in the course of counselling or therapy, that must pass a separate test.

But the trial judge ruled against him, finding that even police occurrence and contact reports carry an expectation of privacy.

She then followed the special two-stage process under a Criminal Code section designed to protect the personal information of a sexual assault complainant.

This section is Parliament’s effort — circa 1997 and the Liberal government — to balance the right of an accused to make full answer and defence with the privacy rights of sex assault complainants.

But last year, the Ontario Court of Appeal said the trial judge had made a mistake, that the records had no privacy interest and should have been disclosed to the defence, and set aside the convictions and ordered a new trial.

Always, rarely acknowledged but nonetheless roaring like a river through these judgments and practices, is the same theme: Women are special and different; women are delicate; women’s sexuality is delicate; women must be wheedled into reporting sexual assault by any means necessary

Thus did the matter end up at the high court, which this week sided with the trial judge, ruled that police occurrence reports contain the sort of information that “may do particularly serious violence to the dignity and self-worth” of a complainant, noted that “victims of sexual offences will be less likely to come forward” if they know their past interactions with police will be routinely disclosed, smacked down the appeal court, and smartly reinstated the convictions against Quesnelle.

This is perfectly in keeping with the current preoccupation of the criminal courts in protecting sex assault complainants, who are mostly women, at every turn.

Always, rarely acknowledged but nonetheless roaring like a river through these judgments and practices, is the same theme: Women are special and different; women are delicate; women’s sexuality is delicate; women must be wheedled into reporting sexual assault by any means necessary.

The woman in the Quesnelle case was a street prostitute. That doesn’t mean she can’t be raped; of course it doesn’t.

But Quesnelle denied raping her. That meant, as the Ontario appeal court said, “This clearly was a case that turned on credibility.”

The defence learned of the police reports only from a CBC radio documentary about the woman, in which the investigating detective said that in reviewing the woman’s police file, she “came across ‘four or five occurrences in relation to sexual assaults.’ She said all were violent and involved weapons or being punched in the face.”

You can see why the defence lawyer would be interested in those reports, since the woman also alleged that Quesnelle had threatened her, punched her in the mouth, and sodomized her: Did the woman have a habit of alleging this sort of sex assault?

What effect the reports might have had upon her credibility, and the jury’s original decision, will never be known, because they were never disclosed.

The lunacy in all of this is that the woman’s privacy rights were protected all along, throughout the eight-year process, in the traditional sweeping manner — her name, and that of the other female complainant, were protected by the publication ban which protects any sex assault victim who asks for it (and some who don’t).

It puts me to mind what Laura Rowe, a former member of the Toronto police board and a tough, resilient, ferociously independent feminist, once said.

This was in relation to the view, then much held in certain quarters of the state apparatus, of Karla Homolka as victim (of her then-husband Paul Bernardo, of her age, of her hormones, of whatever).

Nonsense, said Ms. Rowe: Women are full human beings, and thus fully capable of all the good, and all the bad. Period.

This story just touches the tip of an iceberg. Society in Ontario is controlled by the most corrupt, the most criminal personalities that are hell bent on promoting violence towards fathers and they achieve that by turning deliberate blind eyes to the most violent of mothers, ignoring their serious personality and mental health problems and "blaming the victim".

The role is "the best defense is an offence" and that requires blatant fabrication of evidence.

One of the worst examples of Fabrication of Evidence is that of the Criminal Cult called the Children's Aid Societies of Ontario and one of the worst is Lawyer Marguerite Isobel Lewis is while not personally physically being violent to children, she is as guilty of child abuse as any Nazi Death Camp worker who turned on the gas taps or fired the guns into the jews.

Marguerite Lewis is a classic example of a sub-human psychopath with a propensity for cruelty to children and Fathers that knows no bounds. There is literally nothing she will not do to protect the most violent of parents simply because she sees herself as a Feminist Soldier urging on women to abuse men and children as part of her own crazy Fascist Ideas of Gender Superiority and promoting hatred towards fathers.