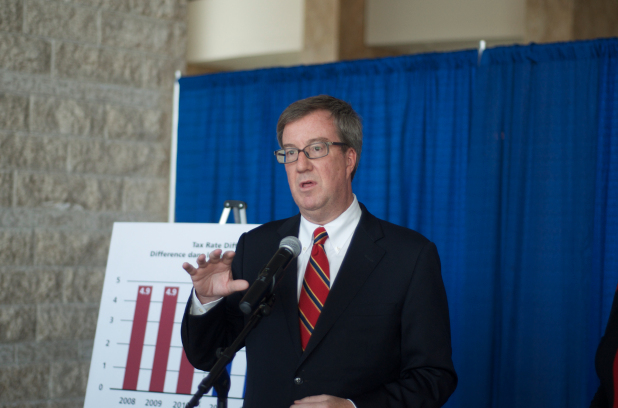 The Carleton University staffer said that although the 2014 budget is “prudent,” it fails to address the city’s pension deficit which amounts to hundreds of millions of dollars.

“The reason why the deficit is growing is because we are not taking any action to address it,” said Lee.

“People are retiring at 55 (years old) and we are living longer and longer. The pension system was never designed to put people on a pension for one-third of a century,” he said, adding that some retirees have been on a pension for longer than their working careers.

He recommends pushing the eligible pension age back so the city’s deficit can stop ballooning.

Lee also said that although the 2014 tax hike is low, expect it to jump over the next four years when big bills from Ottawa’s light rail project and the Lansdowne redevelopment start coming in.

Not everyone had criticisms Wednesday. The University of Ottawa Heart Institute is lauding a $2.2 million injection into the city’s Public Access Defibrillator Program.

Dr. Rob Beanlands, Chief of the Division of Cardiology at the university, says the investment will give front-line responders a much better chance at saving victims of acute heart problems.

“The most important thing is that our paramedics and police officers have the equipment that is required to best respond to cardiac arrest,” said Beanlands. He added 500-1,000 people in Ottawa go into cardiac arrest every year.

Ottawa Mayor Jim Watson fails to respond to the serious allegations of Criminals in the Ottawa Police and the Children's Aid Society committing offences that cost Ottawa Taxpayers Billions of Dollars.

Marguerite Isobel Lewis does not deny that she fabricated evidence and or obstructed justice. Despite this, NOT a single Ottawa Councillor has shown any interest.

It appears that every Ottawa City Councillor is afraid of saying anything negative about Ottawa's Criminal Organization that local lawyers commonly refer to as "The Gestapo".


Ottawa is a probably the most corrupt City in Canada and we can collectively thank all our gutless cowardly politicians at all levels who become deaf dumb and blind when it comes to ending Government Funded Criminals.