Reyhaneh Jabbari defends herself in court in 2008, during her trial for the murder of a former intelligence official at a court in Tehran. Iran on Oct. 25, 2014 hanged Jabbari. Golara Sajjadian/AFP/Getty Images

TEHRAN, Iran – Iran hanged a woman on Saturday who was convicted of murdering a man she alleged was trying to rape her, drawing swift international condemnation for a prosecution several countries described as flawed.

Reyhaneh Jabbari was hanged at dawn for premeditated murder, the official IRNA news agency reported. It quoted a statement issued by the Tehran Prosecutor Office Saturday that rejected the claim of attempted rape and said that all evidence proved that Jabbari had plotted to kill Morteza Abdolali Sarbandi, a former intelligence agent.

The United Nations as well as Amnesty International and other human rights groups had called on Iran’s judiciary to halt the execution, which was carried out after the country’s Supreme Court upheld the verdict. The victim’s family could have saved Jabbari’s life by accepting blood money but they refused to do so. 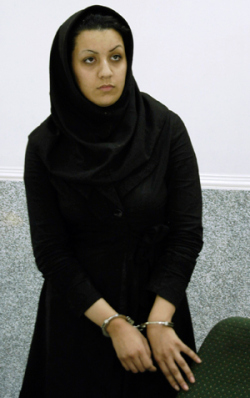 Reyhaneh Jabbari in a Tehran police station in 2007.

According to her 2009 sentencing, Jabbari, 27, stabbed Sarbandi in the back in 2007 after purchasing a knife two days earlier.

“The knife had been used on the back of the deceased, indicating the murder was not self-defence,” the agency quoted the court ruling as saying.

Britain, Germany, and a group of European parliamentarians, among others, condemned the execution, as did the United States.

“There were serious concerns with the fairness of the trial and the circumstances surrounding this case, including reports of confessions made under severe duress,” State Department Spokeswoman Jen Psaki said in a statement.

“We join our voice with those who call on Iran to respect the fair trial guarantees afforded to its people under Iran’s own laws and its international obligations,” she added.

IRNA said the police investigation found that Jabbari sent a text message to a friend saying she would kill Sarbandi three days before the deadly incident.

Iranian media reports say Sarbandi’s family insisted on their legal rights under the Islamic principle of “an eye for an eye” partly because Jabbari accused Sarbandi of being a rapist in what became a highly publicized media campaign.

In a statement ahead of the hanging Amnesty said the investigation had been “deeply flawed” and that Jabbari’s claims “do not appear to have ever been properly investigated.” The group is opposed to the death penalty and has long condemned Iran’s use of capital punishment.

If Reyhaneh Jabbari  had done this in Ottawa Ontario Canada she would be greeted as a Hero. Ottawa is the Capital of where women are openly encouraged to kill men as long as they allege, that they are victims.

The Iranian Trial is alleged to be "unfair". In Ottawa a women recently stabbed her sleeping husband in the back, an even more calculated act than that of,

Reyhaneh Jabbari  who apparently, purchased a knife, and planed to kill him without any element of self-defense.

failing to view the  obvious evidence or ignoring it.

In Canada we have Male Sharia Law where men do not have legal rights and where in Ontario, Corrupt Ottawa Police take their directions from Ontario's "Gender Police" the dreaded Criminal Cartel called the Children's Aid Societies of Ontario. In Ottawa local lawyers call the Children's Aid Society of Ottawa "The Gestapo" for good reason. Their Lawyers like Marguerite Isobel Lewis fabricate evidence on a Daily Basis.

The bad news for Ottawa is that Marguerite Isobel Lewis is about to be appointed as a judge where she will Rubber Stamp CAS decisions just like all the other lawyers who became judges of of the Ontario Superior Court.

If you have had the misfortune of being a Victim of the Ontario Male Sharia Law, by the Ottaawa Police or the Children's Aid Society of Ottawa send an email to