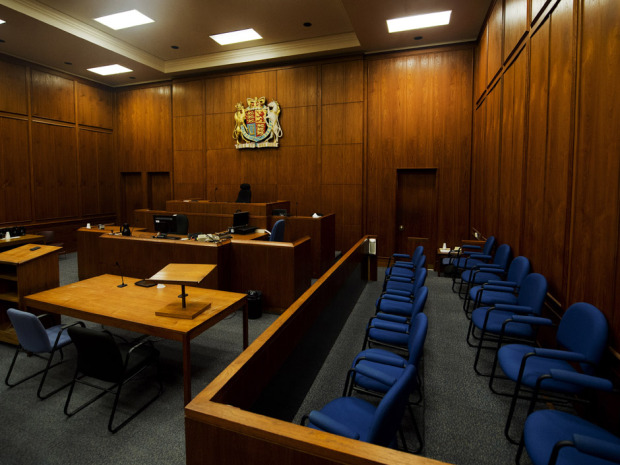 The seats where the jury sits in courtroom 2-3 at the University Avenue Courthouse in Toronto.

Lawyers are openly questioning the Tory government over a provision in new victim’s rights legislation that could allow witnesses to testify without identifying themselves in a broad range of criminal trials — including national security cases — warning that the measures are “unprecedented” and likely to be found unconstitutional.

The legislation, Bill C-32 or the so-called Victim’s Bill of Rights, is mostly concerned with enshrining services for victims and their families. Yet tucked inside, a third way through the 42-page bill, is a provision that critics say goes much too far by giving judges the ability to order “any information that could identify the witness” to be kept secret in a criminal trial.

While the Conservatives contend that they are merely reinforcing an existing power, lawyers testifying at a Commons committee last week expressed concerns about the broadness of the language, with one calling the change “an unprecedented power.”

“It reminds one of medieval inquisitions,” says Howard Krongold, a criminal defence lawyer in Ottawa who serves as chair of the legislation committee for the Criminal Lawyers’ Association. “It really is Star Chamber justice.”

Mr. Krongold, who raised the issue of this section in committee, is referring to a 400 year-old English legal court that operated with confidential witnesses and secret evidence aimed at prosecuting prominent individuals.

Mr. Krongold and another lawyer who spoke to the Post say that, in their reading of the legislation, they expect the bill would allow for proceedings to function as such: the Crown would bring an application to the judge, asking to shield a witnesses’ identity. A judge would order a closed-door meeting with only the prosecution present, and decide on the application. If he accepts it, the witness’ name would be kept secret, and they could testify anonymously. The defence would be forbidden from asking any questions that have the potential to identify the witness, which could include everything from their address, whether they wear glasses, or even whether they have a history of lying under oath.

When Mr. Krongold voiced concerns in front of the House of Commons Committee on Justice and Human Rights, the Conservatives downplayed his comments.

Bob Dechert, Parliamentary Secretary to the Minister of Justice, told the witness that “it is my understanding that the right to face the accuser is not an absolute principle,” going on to note that if a witness’ life is in danger — like in a mob or terrorism trial — then a judge may order protection for the witness.

However, Mr. Krongold points out that seemingly the only cases where the Supreme Court has acknowledged a witnesses’ right to keep their identity secret are in a pair of cases involving police informants, not witnesses.

His concern stems from the idea that, if pertinent information is withheld from defence counsel, it makes it nearly impossible to cross-examine a witness.

“You really remove all the arrows from a cross examiner’s quiver,” Mr. Krongold says. “At that point, you really have a sham proceeding.”

A spokesperson for Justice Minister Peter MacKay told the Post that the new provision merely codifies what has become common practise, indicating that the only power afforded, here, is a witness’ ability to use a pseudonym, insisting that it would protect witnesses from threats and physical harm.

The minister’s office did insist, however, that the power would be tightly limited, given that the legislation sets out that a judge may only order a witness’ identity to be kept secret where it wouldn’t hinder the accused’s fair trial rights and the administration of justice.

Michael Spratt, an Ottawa lawyer who works at the same firm as Mr. Krongold, says the power itself inherently contradicts a person’s right to a fair trial.

“This provision is perhaps the most unconstitutional provision that I’ve ever seen,” he says, calling it “odious.”

Mr. Spratt agrees with his colleague’s reading of the legislation, that it forbids disclosure of this relevant information to the defence counsel.

“You say you saw a drug transaction from your apartment — well where is your apartment?” Says Mr. Spratt, imagining one scenario.

Mr. Spratt adds that this provision, “is geared towards national security cases,” given that it compliments the powers to hold top-secret trials under Canada’s anti-terror laws.

Arguing that there is just about nothing that could improve the idea, Mr. Spratt says “it will either never be used, or if it is used, it will be struck down at the first opportunity.”

In Ottawa the medieval inquisitions continue on a daily basis. The Ottawa Police operate a Terror Organization that literally promotes violence against fathers.

Any woman in Ottawa can make any wild allegation and the more bizarre and unlikely, the more the Ottawa Police are likely to act on it.

This generally results in Male Victims of Domestic Violence being CHARGED by the police and now, these same State Funded Terrorists wish to have their witnesses testify anonymously?

Has Peter McKay gone stark raving mad? This former prosecutor seems to be seriously compromising his ethics and principles to satisfy the Extreme Feminist lobby group.

PROSECUTORS in Canada, at least in Ottawa include some the most vilest examples of criminality.

Take TARA DOBEC of Ottawa. This insult to justice STAYS charges against the most violent of female offenders when the evidence normally would be a slam dunk if the genders were reversed.

Ontario Judges cannot be trusted with the yet another power that effectively removes the right of a fair trial and make a mockery of justice, not to mention leave a trail of destruction and promote terror.

The classic example of a Police Terrorist is Ottawa Police Det. Peter Van Der Zander who fabricates evidence to NOT CHARGE the most violent of female offenders.

The present Ontario Government is FASCIST in nature, it promotes Gender Cleansing, Male Sharia Law and this proposed legislation is an example of the increasingly Fascist nature of our Legal System that believes that 50% of the population, by nature of gender, should not have any legal rights, unless of course they happen to be gay men and there are no mothers involved.


We already have Fascist Secret Courts in Ontario, called C.F.S.A. aka Secretive courts called CAS courts, with draconian publication bans to protect the worst criminals on earth, Child Abusers in the form of employees of Ontario's largest Criminal Cartel, the Children's Aid Societies of Ontario who, spend billions of dollars of tax payers money providing fee legal services for any mother with a serious problem with violence.

Lawyers like Marguerite Isobel Lewis are "anointed" as judges. Its a bit like a putting a hungry shark in the middle of a tank in a fish farm.

It's called "POSTURING" before the court. Women are coached by prosecutors and extreme feminists on how to look like a victim.

Judges are forced to attend Political Camps where they are indoctrinated with Feminist ideas.

It creates a bizarre society where only the politically correct are allowed to be parents.

Memo to Peter McKay,
If you wish to remain in Politics, you should seriously start taking notice of all those letters you receive from lawyers and the community that you are presently ignoring.

You are at presently hell bent on alienating not just 50% of the Conservative voters but all their sisters, mothers, aunts grand mothers who become victims of Canadian Male Sharia Law.