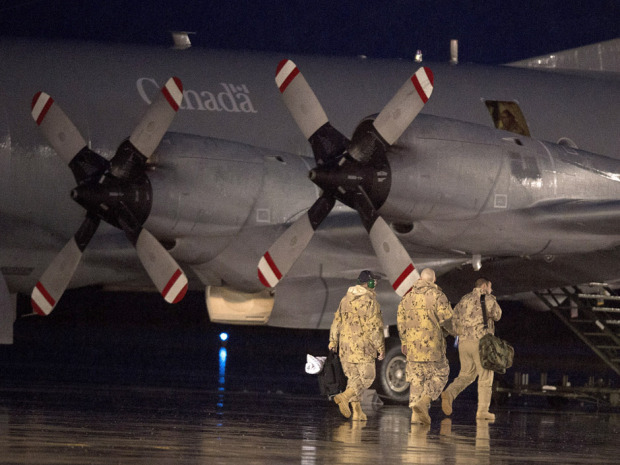 CP-140M Aurora reconnaissance aircraft prepare to leave CFB Greenwood in Nova Scotia's Annapolis Valley on Friday, Oct. 24, 2014. The aircraft and personnel are participating in Operation IMPACT, as part of Canada's contribution to the war against ISIS.

CP-140M Aurora reconnaissance aircraft prepare to leave CFB Greenwood in Nova Scotia's Annapolis Valley on Friday, Oct. 24, 2014. The aircraft and personnel are participating in Operation IMPACT, as part of Canada's contribution to the war against ISIS.

Canada will not announce until Tuesday what targets two of its six CF-18 Hornets hit near the ISIS-occupied Iraqi city of Fallujah. The U.S. military was not so shy.

“Coalition partners carried out four airstrikes on Fallujah on Sunday,” a spokesman for Central Command, which is run out of Tampa, Florida, and Doha, Qatar, said by telephone on Monday. “They struck a large [ISIS] unit and destroyed five bulldozers and one truck which were being used for the construction of berms and other obstacles.”

It is CENTCOM policy not to say which coalition countries take part in specific attacks. But given the Canadian announcement on Sunday that its jets had been in action above Fallujah, it is possible to connect the dots and conclude that Canada was part of the coalition attack that CENTCOM was referring to.

As of Sunday night there had been 783 coalition airstrikes inside Iraq over the past few months. Other than Fallujah, coalition warplanes had bombed in or around the cities and towns of Baghdad, Ramadi, Hit, Irbil, Kirkuk and Mosul, a dam at Haditha and Sinjar mountain.

“We do not focus on a geographic area but where we need to be,” the man from Tampa said. “Wherever [ISIS] is gravitating and we can find targets, we will engage them.”

Until now there have been no attacks by the Islamic State of Iraq and Al-Sham, on coalition aircraft. ISIS is believed to possess shoulder-fired surface-to-air missiles, known as MANPADS, taken from fleeing Iraqi forces. Such weapons can shoot down helicopters and other low-flying attack aircraft but can only reach a maximum height of about 6,000 metres and are unable to reach the altitudes at which Canada’s Hornets, CC-150 Polaris and CP-140 intelligence aircraft are known to be conducting combat operations above Iraq.

Since their first sorties last Thursday, Canada’s Hornets have spent most of their time circling for hours in the vicinity of Fallujah, about 70 kilometres west of Baghdad, as part of Ottawa’s role in the multinational air campaign against ISIS jihadists. And with good reason.

If ISIS can hold Fallujah — which was the first major city they seized in Iraq earlier this year — they are a huge step closer to capturing the notorious prison town of Abu Ghraib and attacking Baghdad, which is the biggest prize on the would-be caliphate’s long wish list. 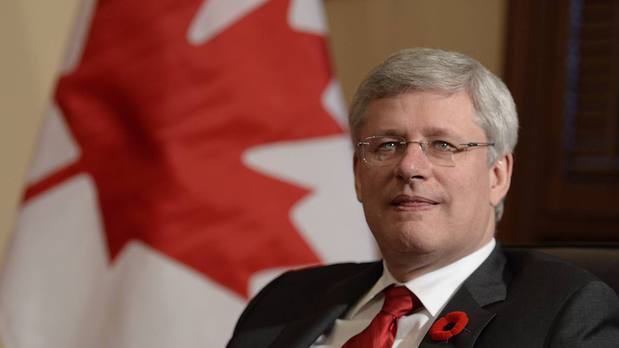 Fallujah, Canadians may remember, produced perhaps the first ghastly images of the Sunni uprising against the U.S. occupation in 2004. Iconic video of the mutilated and charred corpses of four U.S. contractors were dragged through the city’s streets and then hung from a bridge over the Euphrates River. Washington responded by sending in the marines.

I arrived in Fallujah four days after Blackwater’s four armed contractors were murdered there. The city’s police chief made a big show of putting a loaded black revolver on his desk when we sat down for a chat clad in a smart new vest of U.S.-made body armour. The vest and the gun weren’t much help. The colonel, who like so many of his countrymen sported an outsized Saddam moustache, was dead 24 hours later and his headquarters was in ruins.

The bloody chaos that ensued when two U.S. marine battalions arrived for what locals called the First Battle for Fallujah left at least 600 dead within a few days. Not long after that Osama Bin Laden-inspired Al-Qaeda fighters and sympathizes seemed to be everywhere and Anbar province’s strongly pro-American governor was on the run. 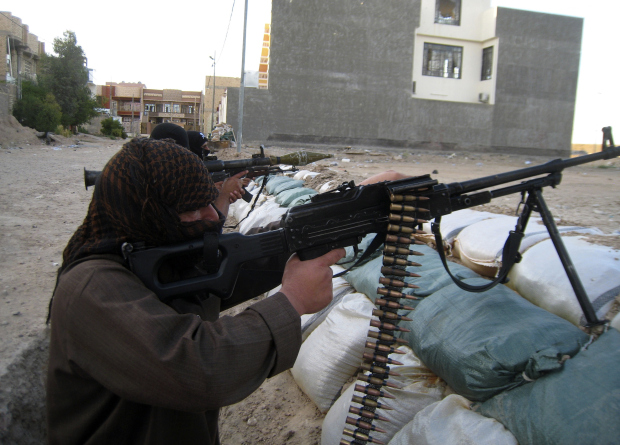 In this Friday, April 11, 2014 photo, masked anti-government gunmen hold their weapons in combat position in Fallujah, 65 kilometers west of Baghdad.

With the help of large gifts of money for local tribal chiefs the marines eventually restored calm to the city before leaving a couple of years ago. Not long after that the killing in the so-called Sunni Triangle began again. Taking advantage of the huge vacuum that had been left by Saddam Hussein’s sudden ouster and the premature departure of all U.S. forces from Iraq in 2011 that was ordered by President Barack Obama. Some of the tribes duked it out for power in the deeply conservative City of Mosques or did battle with the hated Shiite-dominated government that had won somewhat democratic elections that Iraq’s American proconsuls had demanded.

Back in 2004, the senior U.S. civilian spokesman in Iraq, Dan Senor, accused “the enemy of wrapping themselves in the population.”

"Wherever [ISIS] is gravitating and we can find targets, we will engage them"

If that sounds eerily familiar, it is because that was also what Gen. Lloyd Austin, the Centcom commander, said not long after the initial U.S. airstrikes this summer ripped apart ISIS troop concentrations.

ISIS now has a stranglehold on Fallujah where it has been ruthlessly promoting the same puritanical ideology that it has imposed elsewhere in Iraq and Syria. Women must cover their faces and may not leave their homes unless accompanied by a close male relative. Western haircuts are forbidden for men. Nobody is allowed to smoke. Television consists of religious programming.

Forcing ISIS out of western and northwestern Iraq and reestablishing the Iraqi government’s control there is the announced goal of Canada and the coalition. A spring offensive that will combine western air power and retrained Iraqi ground forces is anticipated.

Fallujah will be one of the first great tests of that campaign. That is why Canadian fighter jets struck first there. That is why they will be back there many times again.

When it comes to the War on Terror, perhaps Mr. Harper and the honourable Mr. Peter McKay should turn their attention to dealing with the Terrorists in Ontario who are funded directly by the Ontario Government to wage a Sharia Law like war on men.

Ontario spends a Billion dollars a year on a Fascist Cult like Criminal Cartel called the Children's Aid Societies of Ontario.

In Ottawa CAS Lawyer Marguerite Isobel Lewis personally fabricates evidence before Judges that Male Victims of Domestic Violence admit to being pedophiles when no such admissions are made.

This Criminal Organization targets Men, as part of Ontario's unofficial but funded with billions of dollars "War on Fathers".

Their official name is "The Children's Aid Society of Ottawa" local lawyers refer to them as "The Gestapo" for good reason. They operates as "A Mother's Aid Society" where our Feminist Liberal Government uses the subterfuge of "Child Protection" to operate a Fascist Male Gender Superiority program.

Any male who says he is a male victim of unprovoked domestic violence is deemed to be incapable of supporting the children's relationship with the violent mother.

These lowest forms of life operate by using "Hired Pens" like the vile Dr. David Alexander McLean who personally fabricates evidence to terminate children's relationships with full time fathers who just happen, to be, victims of unprovoked domestic violence.

Dr. McLean is a professional Child Abuser who has spent decades fabricating evidence as what our Father Hating Judiciary call "An expert Witness".

An expert is correct, an expert at Fabricating Evidence to support the worst Terrorists in Canada, the lawyers for "The Gestapo" aka "The Children's Aid Societies of Ontario.

These unaccountable Professional Child Abusers, are supported, given approval without any accountability for Criminal Offences by Judges who automatically turn a blind eye to the most serious of criminal offences by CAS Lawyers.

Ottawa's CAS, Lawyer Marguerite Isobel Lewis is the talk of the legal community. You can walk the passage way of 161 Elgin Street and hear up to four different groups of a lawyers all outraged at the Judiciary's encouragement of Fabrication of Evidence by "a lawyer".

When is going to end?

Enough is enough. It's time for public accountability of the Judiciary and an end to the Ontario's Government's Billion Dollar Funding to a Cartel of Criminal Terrorists.