Matt Gurney: Do the crime, keep your pension. Sweet deal there, DDM 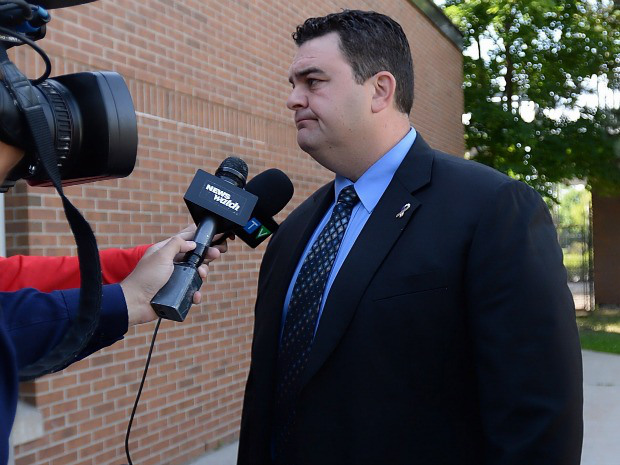 Dean Del Mastro arrives at court in Peterborough, where he was found guilty of violating election laws.

Earlier this week, as the country’s press briefly turned its attention to the fate of disgraced former Tory MP Dean Del Mastro, there was a true “Only in politics” moment. Mastro, who was convicted last week on charges relating to overspending on his 2008 re-election bid and seeking to conceal that fact, in violation of the Elections Act, faces up to three years behind bars for his crime. He also faced a swift end to his political career, as someone convicted under the Elections Act is barred from sitting in Parliament for a period of five years from the time of that conviction. In this particular case, depending on when the next election takes place, that means Mastro was ineligible to finish out his current term and in all likelihood ineligible for all of the next one, too.

But here’s the rub: Does get to to keep his pension?

In a world where things made sense, the answer would be no (and more on why later). But this is politics, so the answer was “That depends.” Having violated the Elections Act, Mastro was no longer able to sit in the House, but that disqualification was not, for some reason, automatic. Mastro had to either resign his seat willingly, or the House could vote to expel him. In the end, Mastro would still be out and the seat open for a byelection, but there’s one important difference. Under the current laws, an MP who is expelled from the House for serious criminal wrongdoing loses their pension. An MP who resigns, for any reason, gets to keep it.

At first, Mastro signalled that he had no intention of resigning, because he insists the case is not over yet and he will win an appeal. The Conservatives, the party to which Mastro used to belong before getting the boot from caucus after being charged, didn’t seem in any particular hurry to force the matter along. The NDP, however, signalled that it would hold a vote on expelling Mastro, and in a surprise move, the Tories said they’d support it. The writing thus on the wall, Mastro stood up on Wednesday and, after taking the opportunity to talk at length about all his many accomplishments, resigned before he could be expelled. His pension, therefore, is safe.

But should it be? I’m not proposing we go and rewrite the rules just to get Mastro, as changing the laws retroactively to zing one person isn’t how things ought to be done. But there is a real issue of fairness here. It’s one thing to acknowledge that under the current laws, Mastro gets to keep his pension. He does. The real issue is whether he ought to have qualified for the pension in the first place.

In order to qualify for their pension (which, for the average member of the House, is just under $60,000 a year, for life), an MP must serve six years in the house. Mastro was first elected in 2006, re-elected in 2008 and then re-elected again in 2011. He therefore reached his pension eligibility in 2012, early in his third term. But the 2008 election, his second victory, is now, in the eyes of the court, tarnished. Yes, he won in 2008, and by a comfortable margin, capturing 47% of the votes, well ahead of the second-place Liberal challenger. That victory, however, came after Mastro spent well above what he was legally entitled. The Elections Act lays out rules that all candidates must follow. Mastro broke those rules on his way to winning.

Not to put too fine a point on it, but he cheated.

And yet he gets to keep his pension, even though he only hit six years in office on the back of at least one questionable victory. No one knows what would have happened in 2008 if he’d played by the rules, but we do now that we’re on the hook for his pension for the rest of his natural life.

Mastro may never face any time behind bars. The maximum fine he will pay is limited to only $6,000 — $2,000 for each of the three counts he was convicted on. That, by my rough math, is just under six weeks worth of the pension cheques we’ll be sending him. The pension he probably shouldn’t have yet will be allowed to keep, in other words, will pay back his fine probably around the same time he’s finally unpacking his Ottawa boxes back home in Peterborough. Sweet deal, that. Only in politics.

Rumour is that Ontario is about to appoint one Marguerite Isobel Lewis as a Judge of the Ontario Superior Court.

Marguerite Isobel Lewis is famous for Personally Fabricating Evidence before Judges who used to work for the same Criminal Cartel, The Children's Aid Societies.

The Ottawa Police give this Criminal total immunity from prosecution because they like the Children's Aid Society, are engaged in a Fascist program of Gender Cleansing.

Any male victim of domestic violence is treated as a heretic and has a high probability of never seeing their children again.

Local Lawyers don't call them the Children's Aid Society. They refer to them
as "The Gestapo".

When it comes to Criminals Getting Pensions spare a thought for the Unconvicted Criminals of Canada who engage in the most outrageous criminal offences, abuses of power and then get their Pension.

Take Ontario Superior Court Judge Monique Metevier, she knowingly issued orders for her friends, the Children's Aid Society, Exparte without notice or service, and left a trail of destruction, destroyed lives and then when a complaint was filed with the Judicial Council, "RETIRED" to prevent the Judicial Council from carrying out an Investigation.

This "judicial misconduct" is well known by most of the Judges of the Ontario Superior Court of Justice and, without fail, each and every judge in Ottawa who comes across her Obstruction of Justice, works to cover it up but creating more destruction and destroyed lives.