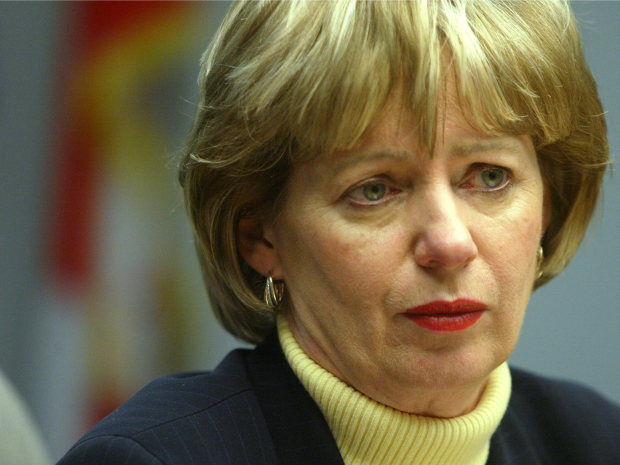 Judy Sgro: Staffer "had to leave"

Even for people schooled in the many incongruities of Canadian government, this one is hard to get your head around: the three political parties that compete over who prizes women more, who most encourages women candidates, who is most fervent in seeking the elimination of prejudice against women — these three parties that collectively have won the vast majority of the seats in Parliament as long as anyone can remember don’t have a process for dealing with complaints of sexual abuse by Members of Parliament.

We learn suddenly – and only because of a scandal involving a Toronto radio host – that women have for years – decades more likely – endured harassment, abuse, humiliation and sexual misconduct by MPs. Overwhelmingly, it has to be assumed, by men against women. And when the victims complained – if they could summon the nerve – it went nowhere. Whips didn’t help them, leaders let it ride, party officials advised there was little or nothing they could do. Reports Wednesday indicated Liberal MP Judy Sgro “told reporters she has known of at least one case of harassment on parliament Hill by an MP where a young female staffer was afraid of losing her job so ‘she endured it for quite a while.’

“’Gradually it got so she was speaking to a variety of us MPs. And nothing changed in that employment picture, so she eventually had to leave,’ ” said Ms. Sgro.

At the risk of taking her remarks out of context, it has to be asked why the young woman “had to leave” if a senior Liberal MP and former cabinet member like Ms. Sgro was aware of the situation? Why was nothing done to “change the employment picture?” Why was there no action taken to remedy the situation and ensure it didn’t happen again?

Well, apparently because there is “no process” for that. Judy Foote, the Liberal whip who approached the NDP about the allegations laid against two Liberal MPs this week, says she was surprised to learn there was no formal means for dealing with such things.

“It was really important to find out if a process existed, where we could direct this, to be dealt with by a neutral party. There wasn’t,” she told CBC News.

“So that’s why I’ve written to the Speaker asking that such a process be initiated as quickly as possible.”

It’s not like sexual harassment in the workplace is a new and confounding issue that just popped into public consciousness out of nowhere. Awareness has certainly been heightened by the allegations against Jian Ghomeshi at the CBC, but only to the extent that a high-profile figure has been accused of activities many have long complained of at less-exalted levels. Yet parliamentarians, while eager to wring their hands and get before cameras to proclaim their sympathies with “progressive” policies towards abuse, have evidently done diddly-squat about policing themselves or acting on complaints.

An unnamed intern says she twice attempted suicide over the treatment she endured. Former Liberal and NDP staffer Ian Capstick says he was twice harassed, but didn’t say anything because he felt “helpless”. For a time he served as press secretary for the NDP – the go-to party for sanctimonious protestations of devotion to equality – yet apparently didn’t feel safe raising the matter with any of its leading lights. Some of the most respected names in Canadian political journalism – who happen to be women – report that everyone knew what was going on, and in some cases they endured humiliation themselves, but learned to ignore it.

Liberal leader Justin Trudeau piously announced that the notion of “innocent until proven guilty” has no place in Liberal office environs. Instead “Action … must give the benefit of the doubt to those who came forward.” To that effect he revealed the names of the two accused, suspended them from the party and blocked their candidacies for re-election, while protecting the identities of the accused and refusing to say what they were accused of. Both men are now in the position of having to prove their innocence while dealing with the inevitable public fallout and family crises the accusations are certain to create. One of the two says he has been given no details of the claims against him. The CBC reports that the women themselves are upset that Trudeau went public without notifying them.

Whatever the outcome of the investigation of the two MPs, they are being penalized for the failure of their party to establish a means for dealing with such situations that treat both accused and accuser fairly. Lacking a process, the Liberals opted for public humiliation of the accused, which has the added benefit of protecting Mr. Trudeau from any claims he failed to act promptly. Imagine the outrage that would have been directed at Prime Minister Stephen Harper if the two accused MPs had been Conservatives, instead of Liberals alleged to have harassed New Democrats.

It’s ugly politics. It’s a rank condemnation of the means by which MPs police their own activities, and yet another example of the deep hypocrisy that seems to thrive at the seat of Canadian government. The next time a Member of Parliament starts lecturing Canadians about the need to fight for equality, tell them to look in the mirror.

The Liberals of Ontario are primarily responsible for their Fascist Ideas of Gender Superiority, disguised as "Feminism".

Ontario spends billions of dollars on its Promotion of Violence against man and in particular, its terrorism against Male Victims of Domestic Violence.

Ontario has it's own "Gestapo", a secret police force, funded to the tune of a Billion Dollars a year, whose primary role is to terrorize Male Victims of Domestic Violence.

Ontario Operates it's own secret court system called the Child and Family Services Act, that promotes Violence against men in particular fathers.

The Gestapo, is the name local lawyers give "The Children's Aid Society"

Their Lawyers, operate by Fabricating Evidence.

Ontario spends Billions on Policing and yet, around 75% of that budget is effectively spent on Promoting Violence against men.

In Ottawa, the Ottawa Police claim, 90% of all perpetrators of domestic violence are male.

They achieve this statistic by Fabricating Evidence Against Fathers.

In Ottawa Crown Attorneys like TARA DOBEC actively encourage women to be violent to men by STAYING charges against the most violent of female offenders.

Our Judiciary literally stand around and kick the victims on the ground.

Thanks to dead beat politicians of all parties who actively take part in the Fascist Program of Gender Cleansing.