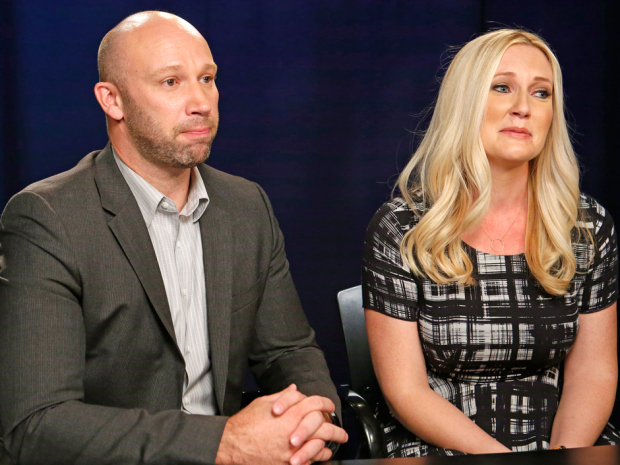 Aaron Edson and his wife Stephanie tear up describe the experience of seeing a man trying to kidnap their 5-year-old daughter Lainey from their Sandy, Utah, home last week, during an interview in New York, Monday, Nov. 10, 2014.

NEW YORK — The Utah parents whose 5-year-old daughter was taken from their home say “divine providence” played a hand in keeping them calm and getting her back when her father confronted the suspect.

Stephanie and Aaron Edson were in New York City on Monday, just days after they say they awoke to hear someone in their suburban Salt Lake City home leaving with their daughter Lainey.

Aaron Edson said that when he ran outside Friday morning and saw the man, his gut instinct told him to remain as calm as possible. He said he normally would have yelled and been agitated.

The Edsons said their daughter also remained calm throughout the encounter.

“I believe he would have tried to harm her if she would have been screaming or anything else,” Stephanie Edson said.

‘I want to help you, but you can’t take her’

Aaron Edson said when he went outside, he approached the man and asked him who he was. The man turned around and told him he was in trouble, that he needed the child with him or else he would be killed and that he needed to get to a church, Edson said. “I said, ’I want to help you, but you can’t take her,”’ Edson told The Associated Press.

The man responded with a sigh and handed the child over.

“My thoughts were not my normal thoughts and normal way of dealing,” Edson said. “I was overcome with something I believe to be divine intervention.”

He said he felt if he had yelled and screamed at the man, “something horrible would have happened.”

Forty-eight-year-old Troy Morley of Roy, Utah, was arrested about two blocks away in another home in Sandy, Utah, that police say he broke into; he remained jailed Monday on charges of child kidnapping, burglary, trespassing and resisting arrest.

The Edsons, who said they don’t know how the man got into their home, said their daughter is doing fine and doesn’t seem traumatized by the encounter.

Stephanie Edson declined to comment on a punishment for the perpetrator but said, “There are consequences for his actions and he deserves them.”

In Canada Child Abductors and Child Abusers wear black robes and are called Lawyers and Judges.

Take MARGUERITE ISOBEL LEWIS, a lawyer for the Children's Aid Society of Ottawa who personally fabricates evidence to remove children from Male Victims of Domestic Violence.

Then we have Judges who deliberately and knowingly ignore incontrovertible  evidence that lawyers like Marguerite Isobel Lewis personally Fabricate evidence.

The Judges of Ontario who engage in this Criminal Behaviour are abusers of trust, abusers of society, and worst of all, abusers of the most vulnerable.

Take Justice Linhares Desousa, she refuses to hear motions to STOP the CAS engaging in Obstruction of Justice and Child Abuser.

Justice Monique Metivier, well "retires" when a damming complaint is filed with the Judicial Council. This Professional Child Abuser actually grants CAS orders "exparte" to the most violent of mothers simply to ensure a child never sees their full time father again.

Then we have TARA DOBEC she personally does what ever it takes to STAY charges against the most violent of female offenders to well, assist her fellow extreme man haters in the Children's aid Society of Ottawa that is part of Ontario's Cartel of Criminal Organizations whose lawyers FAbricate evidence before Judges who, wait for it, were lawyers for the Same Criminal Organization.

Society has placed in power, Judges who while not having any Criminal Convictions, effectively worked for a well known Criminal Organization and Nothing, nothing stops them from continuing their age old craft of  Criminal Offenses disguised as Judicial Decisions.

Ottawa Superior Court Judges are running a Criminal Enterprise to promote violence against men, to run a Fas-cist program of Gender Cleansing.

If you want to see real terrorists and real criminals, they are not in jail, they work as lawyers for the Children's Aid Society where the Criminal actions of CAS endless fabrication of evidence,  get them appointed as Judges.

The Award for of the worst Child Abusers in Canada has got to go to Detective Peter Van Der Zander of the Ottawa Police.

Det. Van Der Zander Personally Fabricates evidence to NOT charge the most violent of female offenders.  He then incarcerates Male Victims of Domestic Violence, all as part of the Ottawa Police Promotion of Hatred and violence towards Fathers.

The Ottawa CAS and the Ottawa Police are just two Criminal Organizations funded by the Ontario Government who not just bring the administration of justice into ill-repute but who effectively engage in wholesale Child Abuse.

Ontario spends Billions of Dollars each year, funding its Fasscist programs of Gender Superiority whose secret police are officially called "The Gestapo".

If you want to see real child abusers and real criminals, visit your Local Children's Aid Society or, Judges Chambers on the 5th Floor at 161 Elgin Street where you can watch lawyers like Marguerite Isobel Lewis fabricate evidence personally with the blessing and approval of her former work mates, now judges of the Ontario Superior Court of Justice.

Its' enough to make you want to puke.

Watch the video at www.Blakout.ca "Powerful as god"