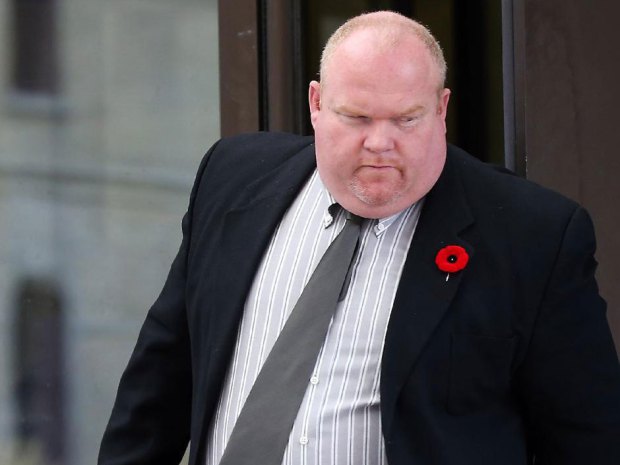 John Barbro leaves the Ottawa Courthouse, November 10, 2014. The former Innes Road jail guard is accused of assault on an inmate.

Jason Nicol is a Crown Attorney formerly from Timmins Ontaro were he engaged in Abuses of Prosecutional discretion and a trail of injustice.

Minutes after a guard repeatedly stomped on an inmate’s head as he lay face-down, cuffed and shackled, outside cell No. 11 at the Innes Road jail, guard Melissa Schell told an Ottawa court Monday, she got off the prisoner’s thighs, went for a smoke, then sat down and filed a deliberately misleading report.

“I was in shock. I was afraid to lose my job … I was afraid for officer (John Barbro) to lose his job,” Schell testified Monday at the trial of former jail guard Barbro, the only guard of some 30 on the range charged in the alleged 2010 beating of Jean Paul Rheaume, who was serving 30 days for a break-and-enter.

Schell wiped away tears as she testified that she left out key information in her report in order to protect Barbro and herself.

Before Schell punched out at 6:45 p.m. on Oct. 23, 2010, she found time to file one more report about the bloody events an hour earlier — events that she said left her in shock. In this report, she pressed internal attempted assault charges against the alleged victim, who they then shipped off to solitary confinement for 30 days, without privileges. No visits or phone calls, and meals in cell.

Some time later, Schell told court about a conversation she had with Barbro. She was worried she’d lose her job, but he was more confident.

She testified that Barbro told her: “Don’t be so upset. I’ve been through 100 of these investigations, everything will be fine.”

But not everything ended up fine, and Barbro got fired from the Ottawa-Carleton Detention Centre.

Schell was suspended for 15 days, half of the time the alleged victim spent in solitary confinement.

Barbro, who is charged with assault causing bodily harm, is being defended by a top legal team, with Michael Edelson at the helm and on the floor in Courtroom No. 4.

In his only cross-examination Monday, Edelson quickly established that the Crown’s first witness didn’t see or hear anything close to a vicious beating. This key witness was Rheame’s cellmate at the time and he witnessed two guards remove him from the cell when he started screaming and threatening the guards.

Schell testified to this as well, saying Rheaume threatened that he’d rape her sister.

"I was in shock. I was afraid to lose my job"

Rheaume’s former cellmate, Nicolas Hudon, testified that he could only see Rheaume’s feet, toes-down, through a small window slot from his cell.

Hudon, no longer in jail, said he could hear what sounded only like wrestling with your brother in snow pants.

He also revealed to Edelson that he heard no thuds or boot stomps (he stomped in the witness box as he testified to this).

In cross-examination by Edelson, the ex-convict witness told court that Rheaume wasn’t the easiest guy to get along with in jail.

Right before Rheaume was downed by guards, he had raised his hand at a guard and made threats. Hudon also agreed that Rheaume was known as a screamer in jail.

Hudon testified that Rheaume said, “Nick, help, help, help,” as the guards dragged him out of the cell.

He said he didn’t want to get involved — or, as Edelson said, the first rule you learn in jail: Don’t poke your nose where it shouldn’t go.

The assault allegation against Barbro has not been proven in court and he is being tried by judge alone.

In his examination of Schell, and after she revealed that she tried to protect Barbro, Crown attorney Jason Nicol asked her if she had heard of the term “code of silence.”

Edelson described that as leading evidence, and dismissed it as “utter nonsense.”

This trial is unlikely to result in a conviction and as the guard said, He had been through a hundred investigations previously.

Jason Nicol is a CORRUPT Crown Attorney who now regularly is involved in Ottawa Cases. He can be expected to follow the lead of the Underbelly of Crowns in Ontario who promote violence against fathers and who prosecute any and everyone who might draw attention to their underlying propensity to commit Criminal Offenses against the Administration of Justice.

Jason Nicol falls into that Underbelly of the most vile examples of Criminality in Ontario that is led by the Likes of TARA DOBEC, one of the Front Line Promoters of Violence against fathers.

Like Jason Nicol, TARA DOBEC stays charges in the most outragious cases of Domestic Violence when, of course the offender is Female.

Like Jason Nicol, Tara Dobec prosecutes frivolous, vexatious and malicious prosecutions simply because the person charged is a Male Victim of Domestic Violence.

On a personal level Jason is a nice guy, just another Gutless Cowardly Crown who follows Ontario's Fascist Government's Promotion of Violence against FATHERS.

It is a no brainer as to why Jason Nicol was chosen to be the Crown in this case.

Jason Nicol spent years as a Crown Attorney in the Corrupt Northern Ontario City of Timmins Ontario where the Timmins Police used to run their own prostitution ring.

The local "authorities" in Timmins used any means to commit criminal offenses against the administration of Justice.

These vile examples of humanity would fabricate criminal charges to arrest FATHERS who were male victims of domestic violence and THEN, have
the most violent prisoners threaten to kill them.

It's to be expected that this extremely violent assault on this prisoner was for reasons that will bring the administration of justice into ill-repute.

Jason Nicol is the last crown in Ontario who is likely to effectively prosecute this case against one of their own, a violent psychopath who works in Ontario's Concentration camps where men have about the same legal rights as those of the Jewish religion who were shipped off by the train load to the gas chambers.

Jason Nicol and the other Corrupt Crowns of Ontario like TARA DOBEC are virtual train drivers sending Fathers to their deaths all in the name of promoting violence against fathers.

Not all crowns are corrupt, but unfortunately, Ontario chooses its Crowns and Judges for their propensity to make Political decisions that follow the Ontario Government's Fascist Program of promoting violence against fathers.