Richard Overy: The politics of obliteration 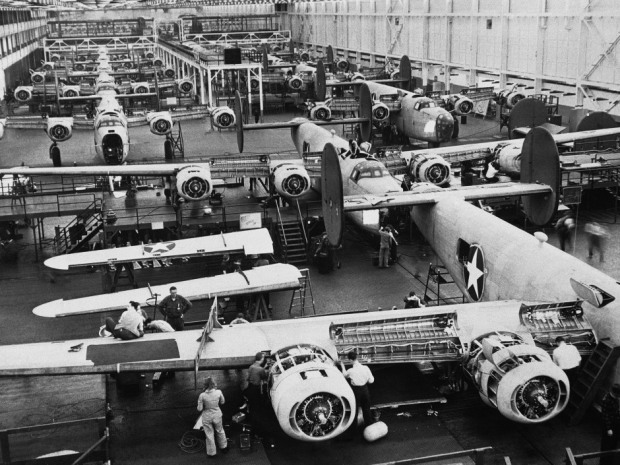 In a recently published book, Richard Overy describes how Allied air-force commanders decided which European cities would be bombed, and which would be spared.

On November 20, The Cundill Prize in Historical Literature at McGill will be awarded to the author of a book “determined to have had (or likely to have) a profound literary, social and academic impact in the area of history.” This week, the National Post is publishing excerpts from all six 2014 Cundill Prize finalists.

During the course of the Allied bombing of Europe, a balance was supposed to be struck between political calculation and military imperatives, since the peoples to be bombed were allies or potential allies.

The cautious bombing of the first two years of World War II reflected a balance in favour of political restraint. In some cases, bombing was used as a “calling card,” to remind populations under German domination not to collaborate or to encourage confidence in eventual liberation. In some cases, the resistance movements called for bombing because they accepted the airmen’s claims about its accuracy and power.

However, by the spring of 1942 and on to the end of the war, the pendulum swung slowly in favour of military necessity, while European resisters became disillusioned about what bombing might achieve. In June 1943, the British Secretary of State for Air, Archibald Sinclair, asked the Secretary of state for Foreign Affairs, Anthony Eden, to reconsider the principle that causing casualties to non-German civilians was a sufficient ground for restraint. Eden had a politician’s instinct that killing Allied civilians was the wrong course, but his reply to Sinclair symbolized the shift in priorities: “If the new bombing plan is strategically necessary, I shall not of course stand in its way.”

By 1944, Allied commanders were increasingly ‘bomb happy,’ summoning bombing whenever there was a problem to solve

American airmen were in general less affected by political calculation, partly because the State Department was geographically remote, partly because Americans were outsiders in the European theater, less aware of the political realities they faced. 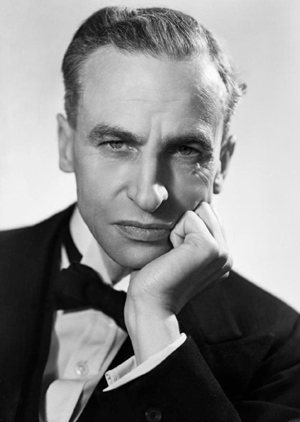 In June 1943, the British Secretary of State for Air, Archibald Sinclair, asked the Secretary of state for Foreign Affairs, Anthony Eden, to reconsider the principle that causing casualties to non-German civilians was a sufficient ground for restraint.

As the western war entered Europe, bombing became more widespread and its effects usually indiscriminate. By 1944, Allied commanders were increasingly “bomb happy,” summoning bombing whenever there was a problem to solve. This produced dangerous paradoxes: The closer to victory and liberation, the more deadly became the bombing; as the bombing intensified, so German antiaircraft resources were spread ever more thinly around the perimeter of the German empire, exposing the subject peoples more fully to the rigors of bombardment.

The occupied states had their own civil defense organizations, but they were in general less well resourced than in Britain or Germany. This would have mattered less if the bombing of military objectives had been as accurate as the Allies claimed (and on occasion achieved). The bombing of Brest, Le Havre, Caen, Mortsel, The Hague, Bucharest, and a dozen or more other cities exposed the hollowness of any claim to operational precision. Bombing was a blunt instrument, as the Allies knew full well, but its bluntness was more evident and more awkward when the bombs fell outside Germany.

After the war in Europe ended in May 1945, many of those who had helped direct the bombing of Germany were curious to see the destruction for themselves. American General Carl Andrew Spaatz flew to Augsburg in Bavaria on May 10 to meet Hermann Göring, who had just been captured by American troops. The American official historian Bruce Hopper was with Spaatz and recorded the two-hour interrogation in a small office in the Augsburg Riding School, in which Göring reflected on why his air force had failed to halt the bombing. It was, Hopper wrote, a historic meeting of the “Homeric Chiefs of the Air War.” All around was evidence of the destruction of the national economic and civil life of a great nation, doomed, so he thought, to be set back by a century as a result. “That,” he added, “has never happened before in history.”

Other senior American airmen visited the German ruins. General Frederick Anderson flew around the captured areas of western Germany, landing where he could and unloading a jeep to get a better look. The diary record of his trip — Jeeping the Targets in a Country That Was — recorded a shocking catalog of destruction: “Mainz, a shimmering shell … Darmstadt, a shambles … Frankfurt. Largely roofless. Looks like Pompeii magnified … Ludwigshafen. Frightful, fantastic spectacle.” 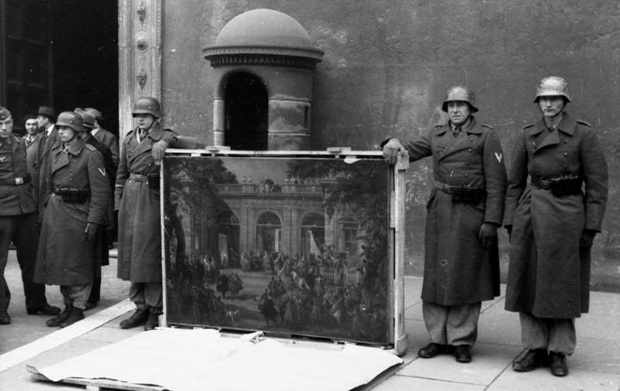 German soldiers of the Hermann Göring Division pose in front of Palazzo Venezia in Rome in 1944 with a picture taken from the Biblioteca del Museo Nazionale di Napoli before the Allied forces' arrival.

Anderson flew across the Ruhr-Rhineland industrial basin where the language he used to describe the spectacle was stretched to extremes: “Dusseldorf, not even a ghost … all ruins begin to look alike … Cologne, indescribable. One gets a feeling of horror: nothing, nothing is left.” His plane took him back to France five days later. His diarist breathed a sigh of relief: “escape from Götterdamerung [sic] back to civilization.”

Sydney Bufton of the Royal Air Force went to look at Hamburg and was “greatly impressed,” but shocked at the sight of people living in wrecked buildings “into which I would not care to venture.” Around the same time Solly Zuckerman, the British government scientist and champion of the Transportation Plan, visited the same Ruhr cities, where he witnessed a similar desolate landscape: “so much destruction one longed for open fields and to get away from the trail of our bombs.” 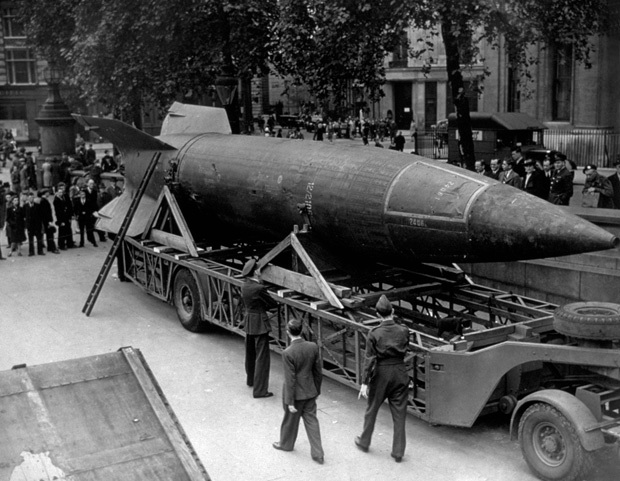 A V-2 rocket on display in Trafalgar Square, London circa 1945.

Here and there he saw women sweeping the pavement in front of houses that were no more than neat piles of rubble; in the eradicated city of Essen, he observed people who looked neat and tidy and in no obvious sense dejected. He was puzzled by this behavior, so at odds with what he had expected. “How the German civilians stuck the bombardments,” he wrote a few days later, “is a mystery.” 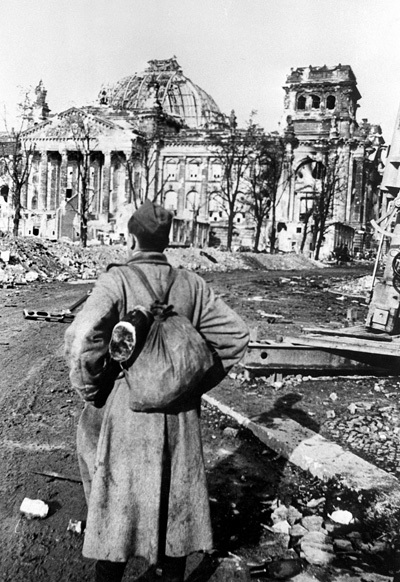 soldier private Mikhail Makarov looks at the destroyed Reichstag building in Berlin circa May 1945.

The survival of German society under the bombs generally has attracted less attention than explanations of British survival during the Blitz. Yet the German population of the major cities had to endure more than four years of increasingly heavy bombardment, fighting a war that was evidently lost long before its end. Despite Germany’s growing debilitation, industrial production, food supply, and welfare were all maintained until the very last weeks when Allied armies were on German soil and Allied bombers were pounding ruins into ruins. The capacity of the state and the National Socialist Party to absorb this level of punishment and manage its consequences demonstrated some remarkable strengths in the system, as well as its harsher characteristics. The question asked by the Allies before 1945 was typically, “When will Germany crack?” For the historian, the issue needs to be approached the other way round. The real issue is how German civilian life, trapped between remorseless bombardment and a suicidal dictatorship, adapted to the material and psychological pressures of progressive urban obliteration.

Obliteration is the process that the Excrement of the Ontario Superior Court use, to get rid of Fathers in Ontario.

It's politely called A program of Gender Superiority, it ensures that Fathers never get to see their children again.

It's a War by Radical Extreme Feminism whose hatred towards men is literally oozing out the walls of the court rooms and police cells across Ontario and Canada.

In Ontario, the Fassccism has escalated to such a level that now the Ontario Superior Court is a mockery and insult to Justice.

The Obliteration of fathers is achieved by a Caricaturistic Justice System that has a veneer of legitimacy. It employs those with a propensity for Cruelty that one would associate with Gestapo Headquarters in Germany in WW2 except the Gestapo today are now called "The Children's Aid Societies of Ontario"

The Judges of the Ontario Superior Court of Justice are in reality a Criminal Cartel that operate by Fabricating Evidence and promoting  Violence against Fathers.

It has reached such a state that the Public of Ontario need to show their revolution for the sickest most depraved sub human examples of human beings who are willing to be part of the Ontario Government Program of Gender Superiority that has as it's goal, the promotion of violence against fathers.