Zehaf-Bibeau took tour of Parliament prior to attack, may have planned to behead politician 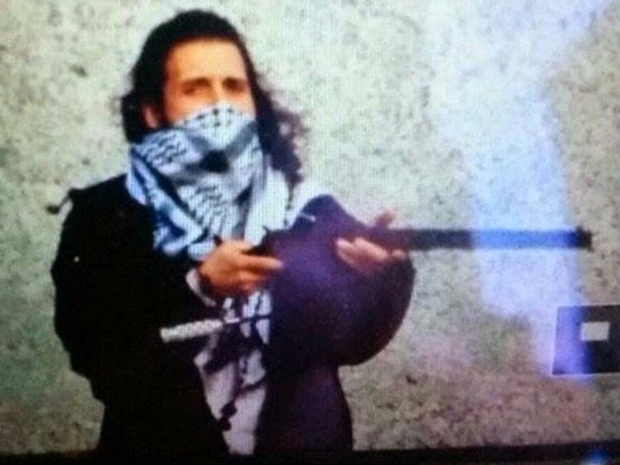 A photo taken by a tourist of Michael Zehaf Bibeau, taken at the site of the National War Memorial shooting.

Gunman Michael Zehaf-Bibeau, who was shot dead on Parliament Hill Oct. 22 after killing a soldier, had toured the Centre Block as an ordinary member of the public in the days before his destructive rampage, the Ottawa Citizen has learned.

The RCMP’s working theory of his actions is that Zehaf-Bibeau planned to behead a Canadian politician once he made it onto the Hill after killing Cpl. Nathan Cirillo at the National War Memorial.

Police have revealed little about the 32-year-old gunman after an early press conference in which they released video showing him hijacking a car outside the East Block, driving to the main doors of the Centre Block and rushing inside. After wounding a guard, Zehaf-Bibeau was shot dead in the Hall of Honour just outside the Library of Parliament, metres from the prime minister and NDP leader, who were holding meetings in nearby committee rooms.

Two sources connected with Parliament Hill confirmed to the Ottawa Citizen that security cameras in the Centre Block captured images of Zehaf-Bibeau inside the building in early October. 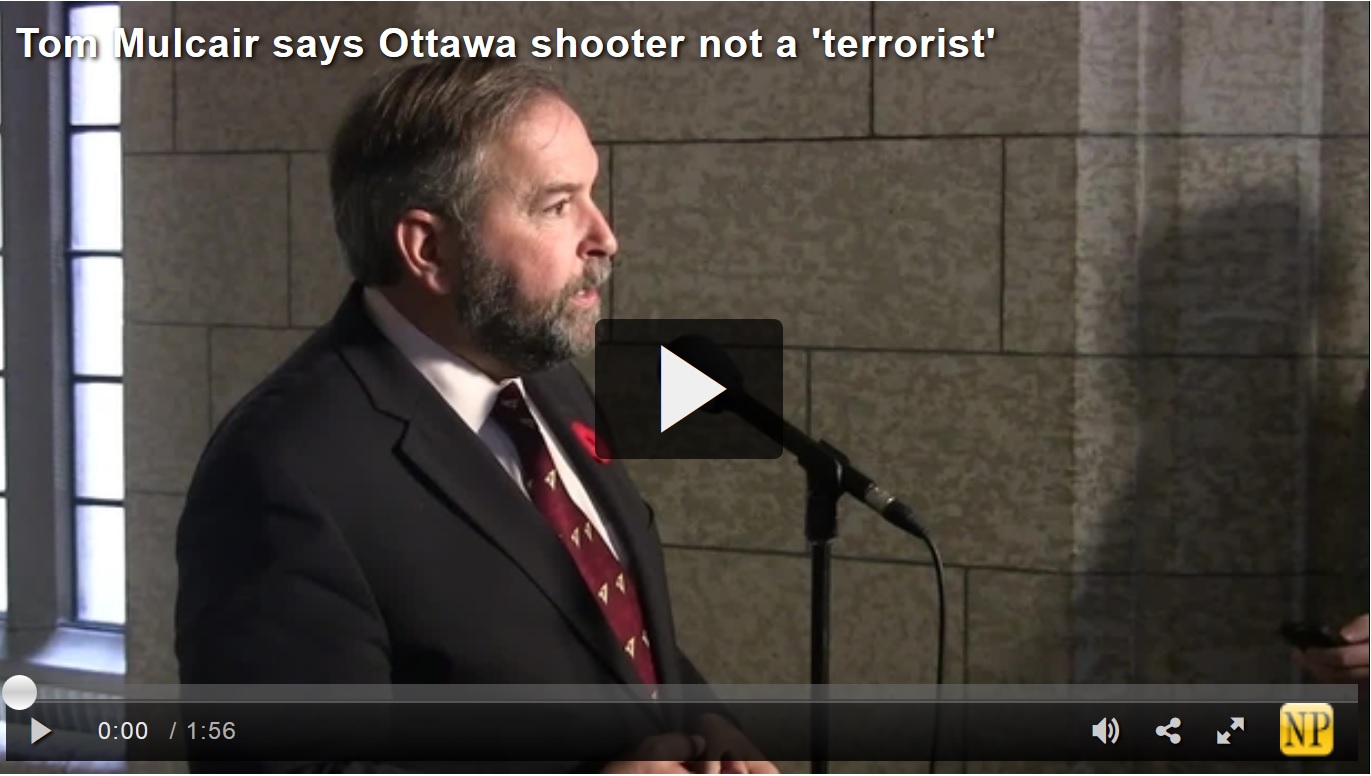 Both said Zehaf-Bibeau was seen on security footage as he went on a public tour of the Centre Block on Oct. 4, which is two days after he is believed to have arrived in Ottawa from Calgary.

Zehaf-Bibeau’s presence inside the building well before the day of his attacks suggests pre-meditation, rather than a sudden decision to kill or even to commit a copycat crime (a soldier had been attacked and killed in St-Jean-sur-Richelieu,
Que., two days prior to the attack on Parliament Hill).

A resident at the Ottawa Mission where Zehaf-Bibeau had been staying since Oct. 2 said the man had shown an interest in the Parliament buildings.

“He was just asking a lot of questions. Asking how hard it was to get into the Parliament Buildings,” said John Clothier.
“I didn’t think he was going to do sh– like that.”

It’s unclear how Zehaf-Bibeau entered the Centre Block on his first visit as an apparent tourist. Members of the public who don’t have parliamentary security passes usually enter the Centre Block through the ground floor doors underneath the Peace Tower, where bags are searched and metal detectors used. Then they can move through the hallways with a tour group. Tours require visitors to obtain tickets at the visitors’ entrance at the base of the Peace Tower.

The main Centre Block doors Zehaf-Bibeau burst through on Oct. 22 were not locked. The door on the East side of the building, leading to the Senate chamber, is always locked.

Speaker of the Senate Noel Kinsella, in an interview with the Citizen on unrelated topics, was asked about the general security needs of the building. He declined to discuss the ongoing investigation of Zehaf-Bibeau, but told the Citizen:

“I’ll simply say, this man knew before he came on the Hill (that) he can’t get in this side (the Senate side).

“The weak spots were all at the other side,” he said, referring to the House of Commons side of the building.

When it comes to National Security and Terrorism, Canadians and our Gutless Politicians need to Man Up to their responsibilities to End the Terrorism that is Funded by the Government of Ontario and the Federal Government to destroy Canada that is far worse than anything ISIS has to offer.

Tim Minemma is another of a Production Line of Terrorists produced by the Ontario Government from the Cess Pool of the unaccountable Criminal Cartel called the Children's Aid Societies of Ontario where Fabrication of evidence is normal along with systematic terrorism of parents and in particular Fathers.

Tim Minemma turns a blind eye to Blatant Fabrication of Evidence by these Terrorists in Ottawa called Lawyers for the Children's Aid Society, when, Tim Minemma used to be a lawyer for the same Criminal Cartel and like most former CAS lawyers "anointed" as Judges get to spend most of their time, in an outrageous and obvious conflict of interest in hearing Cases involving Fabrication of evidence by the Terrorist Lawyers for the Children's Aid Society.

MARGUERITE LEWIS is a lawyer who on September 27, 2012 Personally Fabricated evidence that a father was a pedophile, in order to NOT return a child to his care. Justice Tim Minema knew the evidence was Fabricated and did nothing. In fact in the two years since then, he has remained totally silent on the fact that a lawyer for his former Criminal Cartel, Fabricated Evidence before him.

Tim Minemma can only be called a FASCIST JUDGE who applies the Extreme Feminist Doctrine that it is Illegal for a male to be a parent if he is a victim of Female Domestic Violence.

Tim Minema is just one of the vast majority of Ontario Superior Court Judges who habitually remove children from Male Victims of Domestic Violence.

It means that Fathers across Canada, live in sheer Terror, of having to report Domestic Violence by Women.

Canada is now, thanks to Terrorists like the Dis-Honourable Tim Minemma a country where 50% of parents, Fathers, are subject to the Terrorism of Faccssist Judges and Fasscccist Police officers and, especially vulnerable to the underbelly of the Legal Profession like CAS Lawyer Marguerite Isobel Lewis who Personally Fabricates Evidence with "The Blessing of our Terrorists" on the Fifth Floor of 161 Elgin Street Ottawa that overlooks the monument were

Michael Zehaf-Bibeau shot in the back Cpl. Nathan Cirillo.

While most of the Ontario Superior Court Judges operate with a Rule of Terror against Fathers, this post singles out the Dis-Honourable Tim Minemma because he is a classic example of a Graduate from the Criminal Cartel called
The Children's Aid Societies of Ontario, that cost Canada Billions of Dollars in destroyed lives, destroyed Children and who Rule Ontario in a Reign of Terror.

Ottawa is a classic Example of Fathers living in terror of the Police and the Authorities of Ottawa who systematically operate a Terror Campaign specifically against Fathers.

The Government of Ontario Spends Billions of Dollars on promoting Violence against FATHERS with around 75% of police budgets spent on "Partner Assault"
That's another name for Promotion of Violence against fathers.

Typical of the Hundreds of Fassccist promoters of hatred towards fathers employed by the Ottawa Police is Detective Peter Van Der Zander who, personally Fabricates Evidence NOT to charge Violent women who habitually assault children and fathers.

This lowest form of life of a Terrorist Police Officer, actually incarcerates Male Victims of Domestic Violence for reporting violence by women.

The Dis-Honourable Tim Minemma even fabricates evidence himself and then when it brought to his attention ensures he remains seized of the matter to ensure that yet another Father never sees his children again, because he had the audacity to report Female Domestic Violence.

Canada is a Corrupt Lawless Society that promotes a Fassccist form of terrorism against 50% of parents simply because they were born with testicles.

These vile Criminals Should NOT be permitted entry to any civilized country.

WHEN is a Single Federal Politician going to lift his or her, little finger?