The NDP MP who brought forward allegations of sexual misconduct involving Liberal colleagues says Montreal MP Massimo Pacetti forced himself on her in his hotel room earlier this year. 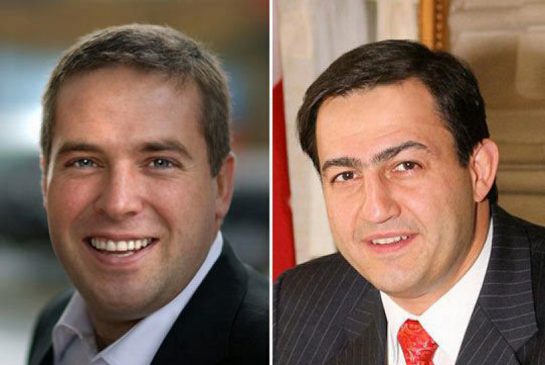 Liberal MPs Scott Andrews, left, and Massimo Pacetti are facing allegations of personal misconduct that were brought forward by a New Democrat MP.

“It was sex without explicit consent,” the female NDP MP told the Star in an interview Tuesday on the condition she would not be identified.

The NDP MP decided to speak to the media this week about the allegations of “personal misconduct” that prompted Liberal Leader Justin Trudeau to suspend Pacetti and Newfoundland MP Scott Andrews from the Liberal caucus Nov. 5.

Both Andrews and Pacetti have denied any wrongdoing.

The francophone MP from Quebec told the Star she knew Pacetti from a sports league and that they would often join other members for drinks after games. One night in March while returning from the bar after a game, the MP recalled, she agreed to join Pacetti for a drink in his hotel room.

“I was sitting on one of the chairs at the side of the room. We were talking a little bit and at one point he said, ‘Just come to sit beside me,’ tapping his bed at the same time.”

She said she declined and then excused herself to the bathroom, where she thought about what she should do next because he had made it clear he wanted more from her than friendship.

“I just thought I should leave, just drink my glass (quickly) and say, ‘I think I better go’ . . . but when I walked back to my chair, when I passed beside the bed, he grabbed me and I froze after that,” she said.

“I was afraid that things would get worse,” she added, explaining that she had been sexually assaulted when she was a teenager and the similarity between the two situations made her feel unable to act.

She said she did not want to go into more details of what happened next, but described it as “sex without explicit consent.”

In an emailed statement, Pacetti said he was innocent and that he was “troubled that the complainant chose to air these allegations in the media as this is inconsistent with statements conveyed through her party that privacy and fairness must be respected for both sides.”

“As with media reports of this nature, in this instance many questions remain unanswered and there is no way to evaluate the veracity of the claims being made,” Pacetti added.

“If need be, this matter should go through confidential process mediated by an independent third party as was proposed by the Speaker of the House of Commons. Canadian standards of fairness and the presumption of innocence can then be maintained to arrive at the truth.”

Andrews has also maintained he did nothing wrong and he did not respond to another request for comment Tuesday.

The NDP MP said she “did not think that much” before approaching Trudeau on Oct. 28, when she shared allegations involving Andrews and a second NDP MP. The MP and the Liberal leader were travelling on a bus together the day of the funeral for Cpl. Nathan Cirillo in Hamilton.

She said she thought she could avoid the issue becoming “politicized” by speaking directly to him, explaining that she had no “specific expectations” but felt it was important for him to know someone in his caucus was behaving inappropriately.

She said she was concerned other women would be hurt.

She said she did not confide in Trudeau about her own allegations involving Pacetti, but said she did bring it up when she and the other NDP MP met Liberal whip Judy Foote and NDP whip Nycole Turmel to discuss the complaint involving Andrews.

After that night in March, the NDP MP said she and Pacetti had no further contact beyond small talk when they ran into each other and that she took some time off to deal with the stress.

The NDP MP said that while she believes it was “appropriate” for the whips to meet and for Foote to ask Commons Speaker Andrew Scheer to help them figure out, in the absence of a policy, how to proceed with complaints between MPs, she believes Trudeau acted too quickly in suspending Pacetti and Andrews before hearing back from Scheer.

“I think it was too fast for him to act like that,” she said.

She said she has no plans to go to police — her decision to file a complaint with police about the sexual assault she experienced as a teenager resulted in police warning her that her credibility would be called into question in the “he said, she said” case.

She said she remains open to participating in an investigation by an independent third party so long as the process is confidential.

“If someone broke my confidentiality I would have to live with that for the rest of my life,” she said, saying she feels her mental health deteriorate for a couple of days every time she has to talk about it.

“If it is always coming back, I don’t think it would help me to heal,” she said.

As for Pacetti, she said: “if he is ready to give me a sincere apology, if he understands how he made me feel, and I feel that he is sincere and he engaged himself to getting help and mental therapy, I feel for myself it would be enough”.

Trudeau told reporters the Liberals have begun looking for a third party to review the allegations and provide on what happened in the absence of the two NDP MPs participating with an investigation.

A Liberal party source said the matters will be looked at as complaints of workplace harassment in the absence of the NDP MPs being willing to take part in any formal complaint.

And the question of whether the MPs are readmitted to caucus or allowed to stand as Liberal candidates in the next election will be dealt with under the party’s “green-light committee” — which may accept or reject candidates who wish to run under the Liberal banner. Trudeau would still have final say as leader however, the source said.

With files from Tonda MacCharles

New information has emerged about the allegations of misconduct made against MP Scott Andrews.

After one of the women complained directly to the Liberal leader late last month, both women agreed to meet confidentially with Liberal whip Judy Foote and her NDP counterpart, Nycole Turmel, to detail their allegations.

Multiple sources familiar with what was said during those meetings have spoken to The Canadian Press.

According to the sources, the incident involving Andrews allegedly started at a social event on Parliament Hill. They say Andrews, the woman involved in the allegations against him and Pacetti went from the event to Pacetti’s office, where they drank some wine. Eventually, Pacetti left, leaving Andrews and the woman alone.

According to sources, the woman alleges that Andrews followed her home, forced his way through her door, pushed her against a wall, groped her and ground his pelvis against her. She ordered him to leave. He did.

Afterwards, sources say the woman alleges that Andrews repeatedly verbally harassed her, calling her a “c--kteaser.”

Andrews has denied any misconduct but sources say he has not yet given a detailed rebuttal to the woman’s complaint.

In an email, lawyer Chris MacLeod, who is representing Andrews, said the MP was not provided with “any details of the internal summary or any documentation from the Liberal caucus” about the complaint against him.

“He is in no position to respond to an unknown allegation,” MacLeod told The Canadian Press.

“Any allegation of misconduct on his part is untrue, and any reporting of the same will be considered libel on the part of you and your office.”

You can understand why the Star won't allow comment on this story but the reality is, this is  "she said" story that has no corroboration and is unsubstantiated.

It also begs the question as to how or why a very strong female personality engaged in sex without consent. She admits she had sex with him and now claims that it was "without consent" and that he forced himself on her.

Rape is Rape. Exactly what allegation is she making? There is nothing in her story of her telling him no, no, leave the room.

Both these allegations are unproven and will be career destroying.

What is disturbing, is she will settle for an admission, an apology, and that is tantamount to an admission of rape. If he says anything including a denial, it will feed the feminist fury.

Society cannot and should not believe every female allegation simply because of the gender of the complainant.