By: Marco Chown Oved Staff Reporter, Published on Mon Dec 01 2014
A Toronto police officer, who pleaded guilty to assault for repeatedly punching a drunken man in the face, will not serve any time in jail.
Const. Gary Gould, 33, was given six months’ probation and ordered to pay a $50 fine for a December 2013 incident in which he assaulted a man who had been arrested, handcuffed behind his back and put in the rear seat of a police cruiser.
The man, Christopher Milani, 21, had allegedly assaulted a gas station attendant and urinated on the floor. When three police cruisers arrived, Milani was belligerent and began “spitting everywhere,” according to an agreed statement of facts read in court on Nov. 24.

Const. Gary Gould pleaded guilty to assault after his repeated punches to a drunk handcuffed man were caught on camera. Aside from probation and a $50 fine, Toronto police say he is suspended with pay and facing disciplinary action. 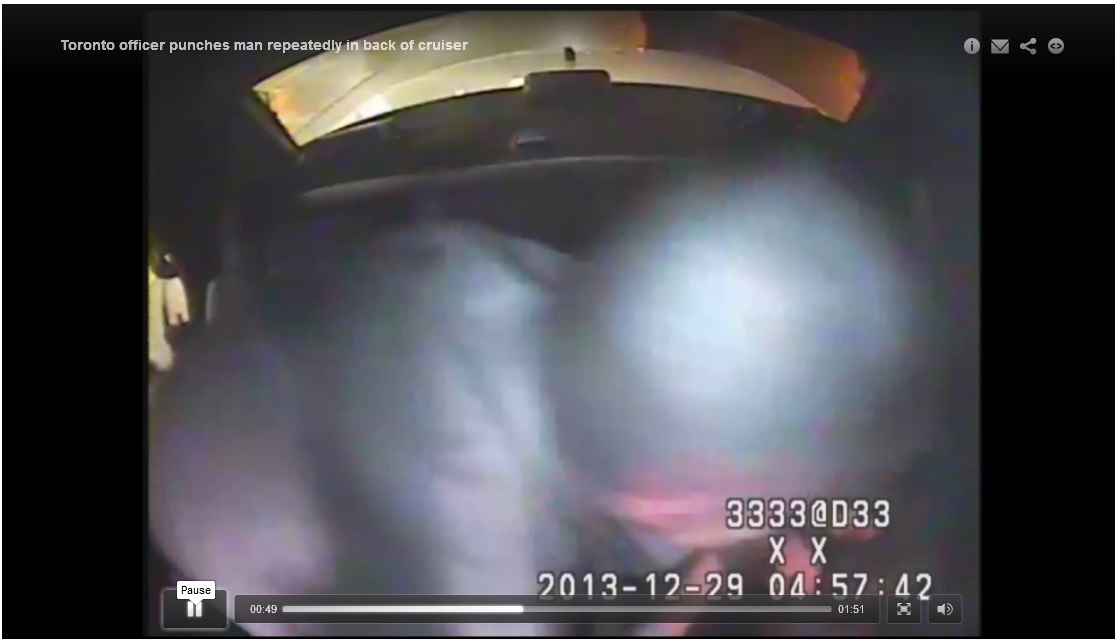 A video captured by a patrol car's internal camera shows a handcuffed Christopher Milani being punched by a police officer. Const. Gary Gould was given six months' probation and a $50 fine after pleading guilty in the assault.

Crown counsel Molly Flanagan played a video of the assault, captured by the police car’s internal camera, in which Milani is placed in the back of Gould’s car and starts kicking at the door and window.
Gould then grabs his shirt and says: “Spit in my face, I f---ing dare you.”
“Mr. Milani spat directly in Const. Gould’s face, striking him in the eye and forehead area,” the statement of facts said. “Const. Gould then struck Mr. Milani in the head and chest area multiple times with a closed fist.”
In the video, Gould is pictured on top of Milani in the back of the car, striking him with both fists. Milani can be heard screaming after the blows.
Flanagan said the video showed Gould striking Milani nine times, but invited the judge to make his own count.
While still astride Milani, several times Gould repeats “stop resisting” before pulling him back up to a sitting position and saying, “Sit up like a good boy.”
Gould himself reported the incident to a superior, accurately described the incident in his notes, wrote a letter of apology to Milani and pleaded guilty, said his lawyer, Andrew McKay.
“He’s taken responsibility for his actions,” McKay said in court. “He’s shown real remorse.”
Ontario Court Judge Howard Chisvin said these facts were important because they demonstrated Gould didn’t try to cover up his actions.
“We want you to come forward when you make a mistake, so we don’t have the problem of police officers going underground and doing all the horrible things we don’t want them to do: falsifying reports, going to trial and lying under oath,” Chisvin said.
In his victim impact statement, Milani said he has become paranoid since the assault.
“I am fearful or paranoid that officers might try to exact revenge or retribution on me because of what happened with Officer Gould,” he wrote.
Milani suffered a concussion during the assault and continues to have chronic headaches, he wrote. As well, his depression has become much more severe. Milani was charged with assault and mischief in the incident; the Star was unable to determine the outcome of those charges.
When arguing over Gould’s sentence, the lawyers focused on his long disciplinary record, which Flanagan said showed “several incidents of aggression and a lack of ability to control anger.”
Gould’s police record includes three assaults — one leading to a criminal charge that was dropped — and several disciplinary hearings under the Police Services Act. In one of those he pleaded guilty to discreditable conduct.
Because each incident occurred when Gould was off-duty, McKay argued that the disciplinary record wasn’t relevant to the Milani case and was in fact “highly prejudicial” against his client.
“What relevance this has is beyond me,” McKay said, describing his client as an exemplary street cop. Gould’s police record also includes 11 commendations for exceptional service.
“He’s the type of police officer who goes into those back alleys on those dark nights to protect the rest of us,” McKay said, describing the assault on Milani as a single lapse in an otherwise good policing record.
“He gets spit on, and that is one of the most despicable acts that could ever occur to a police officer in their minds … and Const. Gould — out of character — snaps and he assaulted him,” McKay said. “One brief moment of his otherwise good career has cast a shadow upon his reputation.”
Gould, who shares custody of his 2-year-old son with his “estranged girlfriend,” has been on paid suspension for the past year, McKay said, and is attending alcohol counselling.
In imposing the sentence, Chisvin said that police officers are held to a higher standard because of their special position of public trust and that Gould violated that trust. Gould did the right thing, however, in reporting the incident immediately afterward, he said.
“As a community, we have a very high expectation of our police. Indeed, sometimes I think we expect them to be perfect,” Chisvin said. “Mr. Gould immediately recognized he did something wrong and we should as a community recognize that he did the right thing by taking responsibility.”
“At work, he’s clearly a different person than in his personal life,” Chisvin said. “His positive complementary activities clearly exceed any negativity within his personnel file.”
Gould has 30 days to pay his $50 fine. He also faces an internal disciplinary process with the Toronto police, which could lead to dismissal.

Vile examples of Police like Van Der Zander bring justice into illrepute and  the responsibility is our Corrupt Judiciary who Rubber Stamp anything Ontario Authorities ask for.

Our Police can commit criminal offences with impunity and immunity. The cost to society is in the mega billion range.