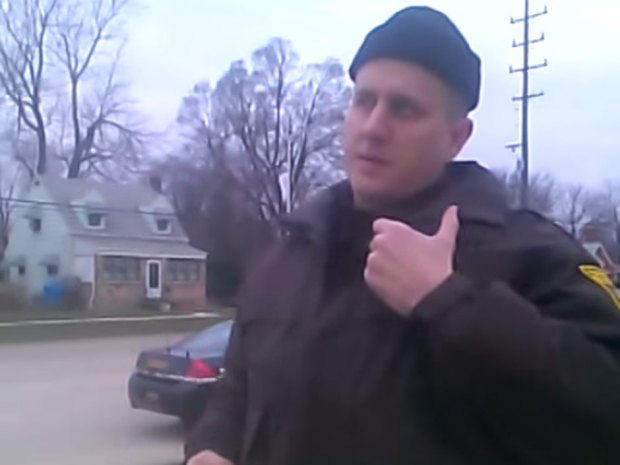 It may be freezing in Pontiac, Michigan, but if you’re a black man out for a walk it’s probably best to keep your hands out of your pockets.

It may be freezing in Pontiac, Michigan, but if you’re a black man out for a walk it’s probably best to keep your hands out of your pockets. Or else risk getting stopped by the police because your actions make people nervous. Brandon McKean posted a difficult-to-believe video on his Facebook page and YouTube that shows his interaction with a white police officer who briefly detained him on Thanksgiving while he was out for a walk.

“You were walking by … you were making people nervous,” the white police officer answers when McKean asks him why he was stopped.

“By walking by?” an incredulous McKean asks.

“Yes, they said you had your hands in your pockets,” answers the officer, who also begins to record the encounter with his phone.

“Wow, walking by having your hands in your pockets makes people nervous to call the police when it’s snowing outside?”

Then the officer keeps going, as if he’s still suspicious of something: “What are you up to today?” McKean is clearly fed up: “Walking, with my hands in my pockets.” Then the officer wonders: “Is it an inconvenience talking to me right now?”

“Hell yes,” answers McKean, noting “the whole police situation going on across the country.” But the officer defends his actions: “We do have a lot of robberies, so I’m just checking on you.”

“Just got stopped Walking BECAUSE MY HANDS WERE IN MY POCKETS……. POLICE STATE,” McKean wrote on Facebook.

If he was a White Male in Ottawa and called police because his female partner tried to kill him, he would be arrested and a Det. Peter Van Der Zander would have fabricated evidence not to charge the female perpetrator.

The the Ottawa Police would have take away his kids and thrown them in the CAS Kiddy Jail where CAS Lawyer Marguerite Isobel Lewis would have further fabricated evidence of "admissions" by the male by simply giving deliberately false information to a judge.

Ottawa Police Promote Domestic Violence with their Fascist Gender Superiority Program that is now getting millions of extra dollars thrown into their bottomless pit.