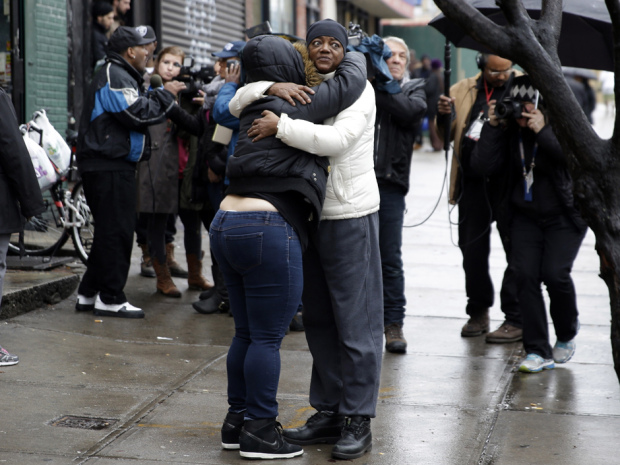 Two women hug near the site of Eric Garner's death after it was announced that the New York police officer involved in the death of Garner is not being indicted in the borough of Staten Island in New York, Wednesday, Dec. 3, 2014.

NEW YORK — A grand jury cleared a white police officer Wednesday in the videotaped chokehold death of an unarmed black man stopped for selling loose, untaxed cigarettes, triggering protests in the streets by hundreds of New Yorkers who likened the case to the deadly police shooting in Ferguson, Missouri.

As the demonstrations mounted, Attorney General Eric Holder said in Washington that federal authorities would conduct a civil rights investigation into the July 17 death of Eric Garner at the hands of Officer Daniel Pantaleo.

Staten Island District Attorney Daniel Donovan said the grand jury found “no reasonable cause” to bring charges, but unlike the chief prosecutor in the Ferguson case, he gave no details on how the panel arrived at its decision. The grand jury could have considered a range of charges, from reckless endangerment to murder

Protesters gathered in Times Square and converged on the heavily secured area around the annual Rockefeller Center Christmas tree lighting with a combination of professional-looking signs and hand-scrawled placards reading, “Black lives matter” and “Fellow white people, wake up.” And in the Staten Island neighborhood where Garner died, people reacted with angry disbelief and chanted, “I can’t breathe!” and “Hands up – don’t choke!”

In his first public comments, Pantaleo said he prays for Garner’s family and hopes they accept his condolences.

“I became a police officer to help people and to protect those who can’t protect themselves,” he said in the statement. “It is never my intention to harm anyone, and I feel very bad about the death of Mr. Garner.”

Police union officials and Pantaleo’s lawyer argued that the officer used a takedown move taught by the police department, not a banned maneuver, because Garner was resisting arrest. They said his poor health was the main reason he died. 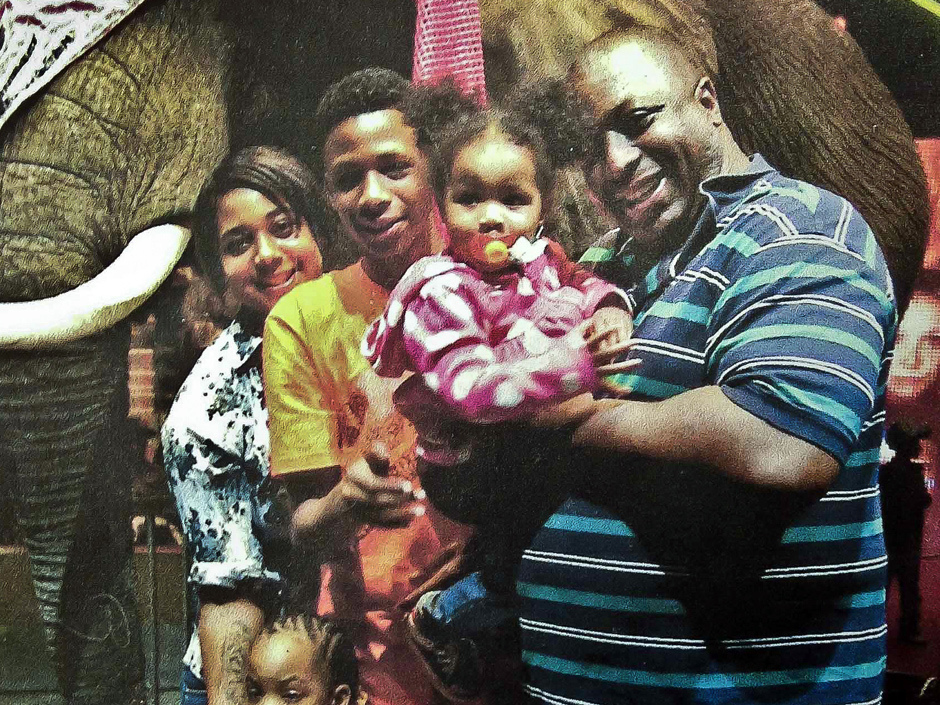 In this undated family file photo provided by the National Action Network, Eric Garner, right, poses with his children during a family outing. According to a lawyer for the victim's family, a New York City grand jury on Wednesday, Dec. 3, 2014 cleared a white police officer in the videotaped chokehold death of the unarmed Garner, who had been stopped on suspicion of selling loose, untaxed cigarettes.

Mayor Bill de Blasio canceled an appearance at the tree lighting and met with Garner’s father and other community leaders. At a Staten Island church, he said “there’s a lot of pain and frustration in the room this evening,” but he called on protesters to remain peaceful.

“I couldn’t help but immediately think what it would mean to me to lose Dante,” the mayor said about his teenage son, who is half-black. “Life would never be the same for me after.”

A video shot by an onlooker and widely viewed on the Internet showed the 43-year-old Garner telling a group of police officers to leave him alone as they tried to arrest him. Pantaleo responded by wrapping his arm around Garner’s neck in what appeared to be a chokehold, which is banned under NYPD policy.

The heavyset Garner, who had asthma, was heard repeatedly gasping, “I can’t breathe!”

Experts said that without knowing how prosecutors presented the case, it’s difficult to theorize how the grand jury reached its decision. In order to find Pantaleo criminally negligent, the panel would have had to determine he knew there was a “substantial risk” that Garner would have died.

Critics of the outcome in Ferguson – where a grand jury refused last week to indict a white police officer who shot unarmed black 18-year-old Michael Brown – complained that prosecutors there allowed the officer to give a self-serving account without challenging inconsistencies. 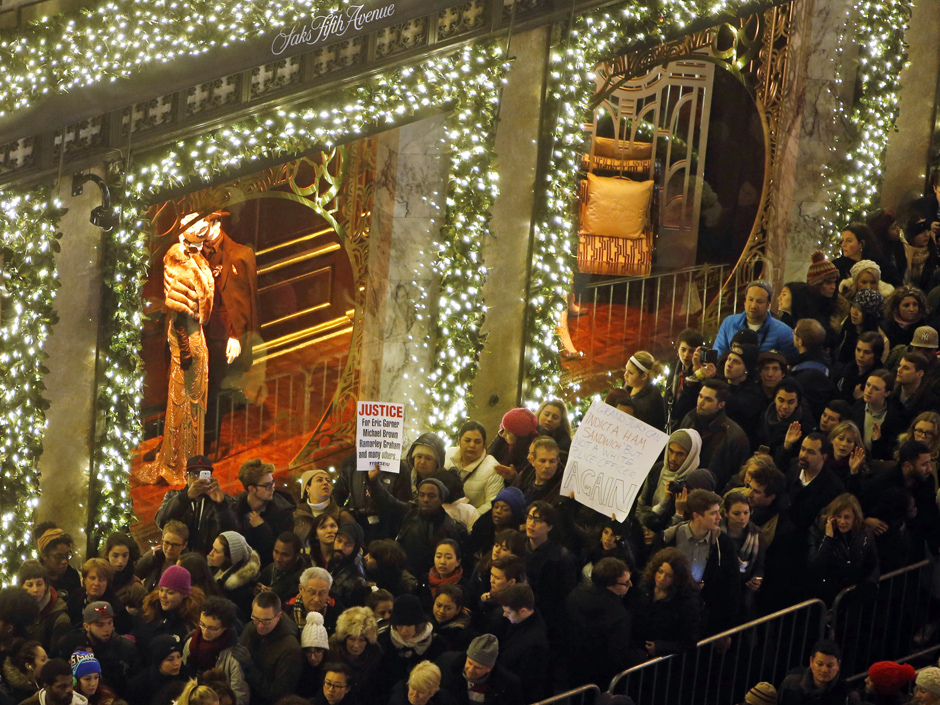 A group of protesters with signs makes their way up a congested Fifth Avenue sidewalk near Rockefeller Center as they rally against the decision not to indict the police officer involved in the death of Eric Garner during a ceremony to light the Rockefeller Center Christmas tree, Wednesday, Dec. 3, 2014, in New York.

The Garner video “speaks for itself,” said Jeffrey Fagan, a professor at Columbia Law School. “It appears to show negligence. But if we learned anything from the Brown case, it’s the power of prosecutors to construct and manage a narrative in a way that can shape the outcome.”

While details on the grand jurors were not disclosed, Staten Island is the most politically conservative of the city’s five boroughs and home to many police and firefighters. The district attorney said he will seek to have information on the investigation released.

The medical examiner ruled Garner’s death a homicide and found that a chokehold contributed to it. A forensic pathologist hired by Garner’s family agreed with those findings, saying there was hemorrhaging on Garner’s neck indicative of neck compressions.

Pantaleo had been stripped of his gun and badge and will remain on desk duty pending an internal police investigation that could result in administrative charges.

As the grand jury decision drew near, police officials met with community leaders on Staten Island to head off the kind of violence seen in Ferguson, where arson and looting resulted in more than 100 arrests and the destruction of 12 commercial buildings by fire.

In the hours after the decision, several dozen demonstrators at the site of the Garner’s arrest scattered cigarettes on the ground in homage to him and lit candles.

“Cold-blooded murder!” said Jennie Chambers, who works nearby and saw Garner daily. “We saw it on TV, it’s on video. The whole world saw it. Ferguson, now us.”

There is a mad haters belief that Police can be trusted to be Jury, Judge and executioner and anyone who disagrees with that idea is a left wing extremist not deserving to be part of the mad mad world of conservative politics.

The Conservatives, need a reality check and an education, before they form opinions and conclusions that anything a cop does or said is beyond reproach and therefore, no accountability is needed or will be given.

It is this Mad Mad world of absolute trust in Police that the Police have, forced upon society.

In Ontario Corrupt Rotten Child Abusing Evidence Fabricating excrement of police officers like Detective Peter Van Der Zander of Ottawa, Fabricates Evidence NOT to charge the most violent of female offenders to exercise his "absolute Power" to make "custody decisions".

In Ottawa the Ottawa Police get 400 Million Dollars a year and 300 Million of it is largely spent on Fabricating Charges against Male Victims of Domestic violence.

That absolute faith extends to supervising officers like Staff Sgt. Granger, and "price is rite" Norm Friel who turn a blind eye to Criminal Obstruction of Justice by you guessed, it, Rotten Cop Det. Peter Van Der Zander.

Absolute Power corrupts absolutely and its only when you go to the Ottawa Police and find out that they refuse to take reports of Police Officers committing criminal offences.

Spare a thought for the innocent children including Child Citizens of other countries like Russia and even Australia who end up being abused by being thrown into the Kiddie Concentration Camp called the Children's Aid Society of Ottawa.

For these abuses of power, we can thank our politicians who keep reducing accountability, which is something the Conservative seem to have lost any comprehension of the meaning of the word.