Despite no criminal record, disclosure of 16-year-old charges against Tatiana Stergiou stopped her from advancing in her career. 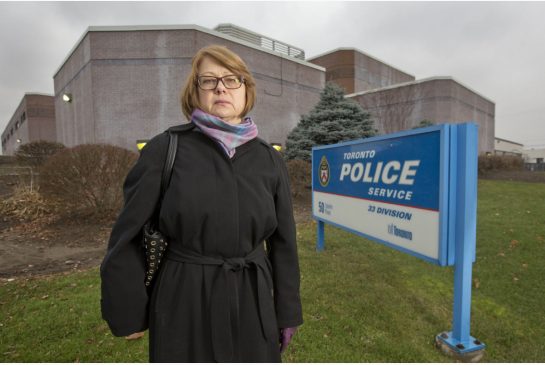 While Tatiana Stergiou has no criminal record, police records continue to reveal the charges which prevent her from employment or even getting volunteer positions in clinical settings. She’s now unemployed and living on social assistance with no prospects of ever being able to work in her field.

But she’s still been treated like a criminal ever since, she says.

Her career and personal life have been “ruined” by allegations from her then teenage daughter which continue to be routinely disclosed to all of her prospective employers despite the fact she has no criminal record.

“It has been a nightmare,” she whispers in a broken voice. “I never imagined this kind of thing could happen. It’s taken everything from me.”

The charges — which included assault, uttering threats and assault with a weapon — were triggered by a heated argument with her then 13-year-old daughter in 1998.

Struggling at the time with a recent separation from her husband and a layoff from her government job, Stergiou says she was under psychological care for stress when a disagreement between the two led to a brief physical confrontation.

“It was the end of my ability to cope with continuous stresses and the beginning of my complete nervous breakdown,” Stergiou recalls now. “It was never my intention to hurt her, nor was physical discipline my belief.”

Some of the charges were withdrawn in court and others resulted in a conditional discharge with 18 months probation. Police documents obtained by the Star confirm she has no criminal record.

The weapon was a set of keys she says she tossed at her daughter as the girl was rushing out the door to school, without intending to strike her.

“There were a lot of pure lies. I’m not sure if she was encouraged by her relatives who were very disapproving that I was divorcing my ex. It was a terrible time.”

The first blow to Stergiou’s career came in 2001 when she lost her job as an administrator at a non-profit organization. Her then employer conducted a police record check on her — which she willingly agreed to — that listed the charges.

“It was a shock. I did not realize then that the police would mention the charges. I was assured by my lawyer that I had no criminal record.”

After returning to school, completing a psychology degree and being accepted into a Masters of Social Work program, she contacted the Toronto Police Service in 2009 seeking to expunge the charges to restore her good name.

“As a social worker, I would always be involved with the vulnerable population which requires a police background check. So a clear record is essential for my life.”

The long, bureaucratic process was looking promising at first.

Over the phone, Toronto Police officials told her it shouldn’t be a problem to have the records removed, she says.

While completing her MSW degree in 2012, Stergiou received a letter from the RCMP confirming she had no convictions registered in the country’s national criminal records database with the stamp bearing the word “CLEAR.”

“I was overjoyed. I thought that I had another chance in life after a very emotionally painful and unfair process,” she says.

That joy was short lived.

After deciding to get experience in her new profession by volunteering at Baycrest Hospital, she was required to undergo an annual police background check with Toronto Police Service.

In April of this year, it arrived.

“To my complete shock, the police letter came back with the 16-year-old charges pertaining to an incident with my daughter. It was so awful,” she says.

Her training position ended there along with her dream of a career as a social worker.

She called and wrote to the supervisor of the Toronto Police records management department hoping that it was some “horrible mistake.”

The eventual answer came in a July letter to Stergiou from Toronto Police Service’s record management office. It reads: “After a thorough review of the matter, I am unable to suppress these records and they will remain on the results of your application to work with the vulnerable sector (such as children, the elderly and persons with disabilities).”

Mark Pugash, a spokesperson with the Toronto Police Service, said that while he couldn’t comment on specific cases, the force releases nonconviction records in order to protect vulnerable people.

“If someone is applying to work with the vulnerable, anyone who hires them needs to be sure the vulnerable are being protected. This has been our view.”

Stergiou says it makes no sense why police charges — and not the outcome of the legal process — can define a person and end a career.

“People who made unfortunate mistakes, like myself, during the most challenging times of their lives should not be on the same list with hard core criminals. I cried every day for five years after the incident with my daughter. Then I found the strength to move on and obtain a Canadian graduate education because it was my dream to be a researcher or a psychologist, just to get hit head on by a huge obstacle which will end all my dreams.”

Now 58 years old, Stergiou’s 1998 charges remain on her record. She’s still searching for a job, living on social assistance and feeling hopeless about her future.

“My life is ruined for good this time without any hope to practise my profession and my life passion and improve my status. And this isn’t just costing me. It’s costing society.”

Canadian and in particular Ontario Police keep a variety of records that are NEVER disclosed to accused persons and are often complete fabrications. The entry of these dubious secret comments is mandatory for promotion in most police forces. The better they read, the faster the writer of fiction gets promoted. The Most honest cops are not.

That means when you have contact with the police they look up any mud that may have been thrown at you, true or pure fiction, that happens to be in a record that Police actively encourage officers to enter.

Its tantamount to a Secret Police action. The "records" that are disclosed often bear little resemblance to the facts. Ontario has the dubious record of an incredible number of charges laid when the probability of a conviction was blatantly beyond remote when the charges are laid. Charges in Ontario are used by Police to endlessly defame and destroy anyone the "police" don't like.

The Toronto Star like every other newspaper and media in Canada is all too willing to run stories on Female Victims of injustice but rarely those of fathers.

This news article "skims" over the fact that her "charges" "resulted in a conditional discharge" which is a plea deal she took to dispose of the charges and she admits she threw but did not intend to strike her.

If she wanted to get rid of the charges she should have elected for a trial.

Across Ontario tens of thousands of Fathers are subject to maliciously laid charges by Police to protect violent women.

Many plead it out, take conditional discharges because they can't afford a lawyer and Legal Aid refuse or cancel their certificates.

Those fathers who go to trial, result in a very small percentage of convictions.

No News Paper in Canada will run any story on Male Victims of Domestic Violence, or the habitual Fabricate of Evidence by Lawyers, Police Officers, CAS workers and even Judges especially those who used to work for Ontario's dreaded Gestapo, the Children's Aid Societies of Ontario.