Kelly McParland: Ontario is all talk while Quebec takes action in balancing budget 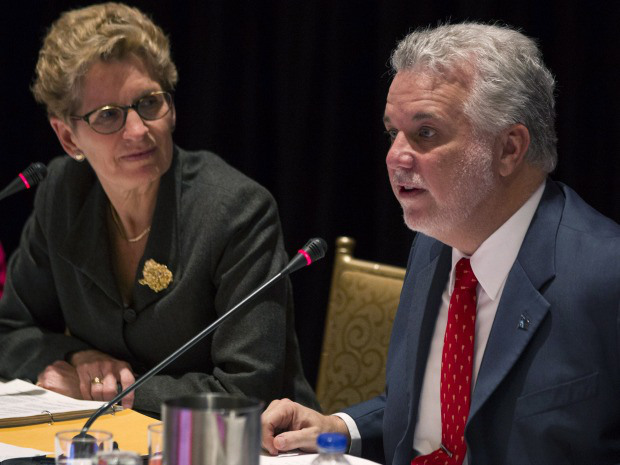 In the short period during which they’ve occupied their province’s top office, Quebec Premier Philippe Couillard and Ontario Premier Kathleen Wynne have shown they work pretty well together.

Not spending more than you earn sounds reasonable enough, but in Quebec it is revolutionary thinking. “Reality shows that state expenditures have increased more rapidly than revenues in recent years,” Finance Minister Carlos Leitao told reporters in Quebec City. “Quebec thus was confronted with a structural deficit that was increasing our debt.” Total debt is forecast to hit 55.1% of GDP next year, and interest payments alone cost $30-million a day, he said.

Speaking to a business audience in Ontario in October, Mr. Couillard indicated he and Ms. Wynne aim to “put Central Canada back at the centre of the map.” They have reached deals to share electricity and address climate change. They issued a joint list of concerns – they say they’re not ultimatums – on the proposed Energy East pipeline, which would transport Alberta crude to the East coast through both provinces. They want to return their economies to the position they once held as dominant forces on the Canadian landscape.

On that latter front, Quebec has shown real progress. Ontario, unfortunately has not. While Mr. Couillard and his finance minister Carlos Leitao have been acting, Ontario is still talking. During just eight months in office, Mr. Leitao has made some brave decisions; his Ontario counterpart Charles Sousa is still stalling for time and hoping something comes along.

As National Post’s Graeme Hamilton reported, Mr. Leitao delivered an economic update on Tuesday that included new measures to get spending under control.

Banks and other financial institutions will face a temporary surtax, to be discontinued when the budget is balanced. A tax credit on union dues will be halved, producing a similar revenue increase as the tax on banks. Gas stations will be required to participate in a carbon market, raising prices just as the global oil glut is pushing them down, so that motorists may not notice much difference.

Previously announced measures have included a 2% reduction in the civil service, reduced transfers to municipalities, suspended bonuses for government managers, and the most contentious – a reduction in subsidies to the province’s famed $7-a-day daycare program, which Mr. Couillard says is unsustainable at current rates.

It hasn’t been pleasant for the government, but Mr. Leitao says it’s almost over. “Nearly 85% of the measures required to return to a balanced budget have been identified,” he said. “More than half the road has been travelled. The difficult decisions have been taken.”

Not so in Ontario, where, during roughly the same period the Wynne government has busied itself buying off unions and rescuing boondoggles, while missing its own budget projections. Just before June’s election, Ontarians learned recently, the Wynne government spent $468 million to re-open contracts for public school teachers, whose support and organizing muscle they badly wanted for the approaching contest. Around the same time, the Liberals quietly approved a $317 million bailout of MaRS, a government-backed research institute that found itself with a brand new office building and too few tenants.

In November Mr. Sousa unveiled his own economic update, in which he admitted revenue was more than $500 million below forecast, forcing the Liberals to withdraw $300 million from a rainy day fund to meet this year’s deficit target of $12.5 billion. Unlike Mr. Leitao, Mr. Sousa had no list of measures to remedy the situation, though he did pledge to crack down on the sale of illegal cigarettes, as governments have been trying to do for years with little success.

The difference between Ontario’s mindset, and that in Quebec, was evident from Mr. Leitao’s assessment of his actions.

“We are not in period where we reduce the state’s spending; we are in a period where expenses continue to increase, at a slower pace,” he said. “That will be the case in the future. In the future we will have to constrain ourselves to not spend more than we earn.”

It would be “unthinkable” to raise income or sales taxes along the way, he said.

Mr. Sousa has a much bigger mountain to climb – Ontario’s deficit is five times the size of Quebec’s – but is much less willing to make the effort to scale it. The Liberals hope economic growth will increase and rescue them from the need. Ms. Wynne has also forged ties with federal Liberal leader Justin Trudeau and may hope a Liberal government in Ottawa will increase transfers for health, equalization, resource development and other areas where the province claims it has been shortchanged. While Mr. Couillard has risked the wrath of voters to make difficult decisions, Ms. Wynne and Mr. Sousa prefer to blame Ottawa.

As a result, Quebec is likely to return to balance while Ontario remains billions of dollars in the hole. Mr. Leitao may be able to avoid tax increases; Mr. Sousa may have no choice if his hoped-for rescue mission fails to appear. The two premiers may enjoy cordial relations and share a common goal, but it’s Quebec that’s showing all the leadership in this partnership.

In Ottawa CAS Lawyer Marguerite Isobel Lewis personally fabricates evidence to abuse children to keep them in the CAS Kiddy Jail and then place with the extremely violent abusers while obtaining Court orders from Corrupt Judges, like
MONIQUE METIVIER who, after a complaint was filed with the Judicial counsel promptly "retired".

Ontario Superior Court is effectively a Fascist Corrupt establishment that "Rubber Stamps" what ever corrupt child abusing request is made by the CAS.

Every Ontario Parent needs to lobby their MP to bring about the replacement of the CAS with a Government Run fully accountable Department of Child Protection.

The costs are staggering, Dam near every police force in Ontario spends 75% of their budget in the government's Gender Superiority program that has slowly but surely made Sole custodial fathers as rare as the dodo bird with around 99% of custody decisions being handed to mothers, even when they are the most violent mothers on earth.

If you want to meet a Child Abusing Corrupt Evidence Fabricating Lawyer visit Marguerite Isobel Lewis at 1602 Telesat Crt Ottawa, the headquarters for what Ottawa lawyers call "The Gestapo".. For very good reasons.


Just remember how Kala was treated as a victim.