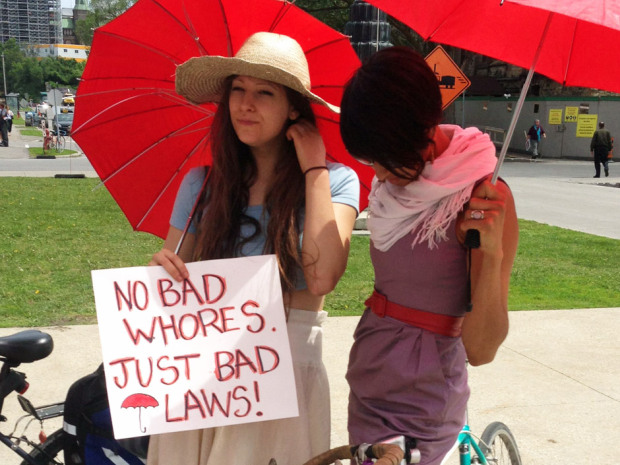 Canada’s new prostitution law comes into force Saturday, the 25th anniversary of the shooting deaths of 14 women at the Ecole Polytechnique in Montreal.

Defenders of the legislation that makes the purchase of sexual services a criminal offence, no doubt think it’s appropriate the Protection of Communities and Exploited Persons Act comes into being the same day as the National Day of Remembrance and Action of Violence Against Women.

Rather more people, I suspect, will agree with one of the women behind the successful court action against the old law, who called it “sick and twisted.”

(For the record, the government claims it had no control over the date the bill received Royal Assent.)

Either way, Dec. 6 fires the starting gun for those who believe the law is unconstitutional because it will continue to endanger sex workers.

The legal challenge process could provide a new front in the cold war being played out between the Harper government and Kathleen Wynne’s Ontario Liberals.

Senior Liberal sources say there is “disquiet” inside the provincial government over concerns the new law does not protect the safety of sex workers. This was the key requirement demanded by the Supreme Court of Canada when it declared the existing law fell foul of Section 7 of the Charter of Rights, which guarantees everyone the right to life, liberty and security of person.

Speaking on condition of anonymity, the source said an intervention by Ontario is possible.

If the province does enter the court process, it has the option of intervening in a process initiated by one of the groups already planning litigation, such as the Sex Workers Rights Movement.

However, it would be a much more potent statement if the province made its own reference, expressing its concerns about the law’s constitutionality.

“It would speak volumes about the widespread concerns that many Canadians have, if a provincial government said it had its own concerns about the position it’s been put in, as far as enforcement,” said Katrina Pacey, legal director for Vancouver’s Pivot Legal Society.

Opponents of the new law are keen for a province to enter the fray for another reason — it could take four to five years for the case to wind its way through the courts and reach the Supreme Court again. However, if a province intervenes, it could expedite matters by taking the case straight to appellate court, skipping one lengthy step in the court process.

Not to suggest politicians are ever motivated by spite, malice or personal vendettas, but the temptation for the Wynne government to stick it to the federal Conservatives must be very great indeed.

Wynne on how to run her government. “I would encourage the government of Ontario to focus on [its fiscal challenges], not on confrontation. What we’ve done at the federal level, we’re balancing our budget, we’re cutting taxes and we’re delivering more services,” he said.

Whether the Ontario government intervenes or not, there is a broad swath of legal opinion that believes the new federal law is unconstitutional and will eventually be struck down by the Supreme Court.

At Senate hearings in the fall, Justice Minister Peter MacKay said he has been advised the new law is “likely” to survive a court challenge.

This advice came, presumably, from the same lawyers who told the government it would win the last 10 major cases at the Supreme Court. In the end, it won just one — losing over Senate reform, the old prostitution legislation and the appointment to the Supreme Court of Justice Marc Nadon, to name just three.

The new prostitution law tries to quash the demand for paid sex, criminalizing what Mr. MacKay called “the perpetrators, the perverts and the pimps” by making it a crime to buy, but not to sell, sex.

The critics point out by criminalizing johns, the well-being of sex workers is not enhanced — the key ingredient of any constitutional law — because prostitutes will take steps to avoid police detection. This will mean they are unable to screen clients and remain at risk of violence, abuse and HIV.

Since the legislation also bans the advertising of sexual services in newspapers and websites, the fear is more women will end up on the streets.

Not to show contempt for the law — in fact, I’m trying to conceal it — but how could anyone believe it passes constitutional muster?

The only hope seems to be the Hail Mary defence that falls back on Section One of the Charter of Rights. This allows a right to be infringed without the charter being violated because it places “reasonable limits” on rights and freedoms.

Given the recent track record of the Justice department’s lawyers, that looks a long shot.

The most obvious conclusion is Canada’s government has passed a law it knows to be unconstitutional, banking on it being long gone from office by the time the hypothesis is proven.

That is more than a little twisted.

More conservative madness that applies a Gender Superiority theme to the legislation. Females can break the law for their occupation but if males are business clients then they are criminals.

Just who do the conservatives think that female prostitutes will choose for clients?

While the majority of Canadians may not approve of prostitution, the fact is, its an ancient trade that is legal in many other countries and it serves a benefit to society.

The proper approach would be to have realistic and logically framed legislation that results from an in depth study of how prostitution is dealt with in other countries where it is also riddled with crime, illegal immigration etc.

Prostitution occurs legally in a wide variety of scenarios. It is also used to make men, virtual slaves for the rest of their lives and its various nefarious and insidious forms result in crimes far worse than rape of men.

It's extremely sad to see how one political party operates on simple minded lynch mob mentality that operates akin to a religious cult. It's the North American version of ISIS.

If only we had politicians with substance, passion, and vision.