Ontario Court of Appeal ruling shrouded in secrecy, with even judge’s name censored

In a bizarre case, only six paragraphs have been released in a ruling where the appellant’s name, offences and description of the trial have been excised. 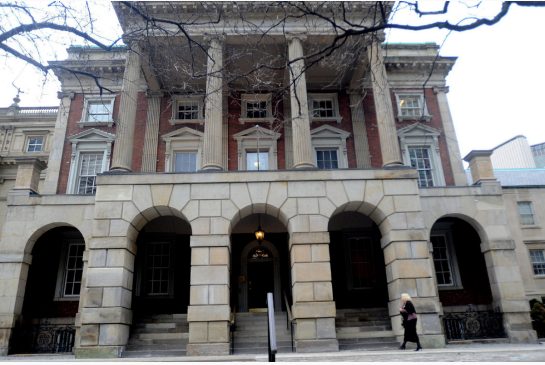 The Ontario Court of Appeal is housed in Toronto's historic Osgoode Hall.

By: Jacques Gallant Staff Reporter, Published on Thu Dec 11 2014
Nearly every piece of valuable information in a recent Ontario Court of Appeal ruling is being kept secret — even the reasons for why so much detail should be withheld from the public.
“On appeal from the order [date redacted] of a judge [name of judge redacted] of the Superior Court of Justice,” begins the decision in R. v. X.Y., of which only six paragraphs have been released.
The name of the appellant, the offences he or she is facing, and the description of the trial have also been censored. Most of the oral arguments on the appeal were heard in camera (behind closed doors), and all documents related to the case remain under seal.
The three-judge panel found that publishing their full reasons could compromise the identity of a confidential informant, without offering any further details.
“In camera hearings and heavily redacted reasons are serious departures from the open justice rule and are not permissible unless justified,” said Jamie Cameron, a professor at York University’s Osgoode Hall Law School. “The (Court of Appeal’s) reasons in this instance do not explain why such a high degree of secrecy was necessary, and that is problematic.”
Legal experts who read the ruling told the Star it is “unusual” to see so much information censored, and that such censorship hinders the public’s right to know what is happening in the court system.
The appeal appears to deal with the Superior Court judge siding with the Crown during pre-trial motions in its refusal to turn over information to the defence that it maintains could identify a confidential informant. The three judges — David Doherty, Kathryn Feldman and Janet Simmons — dismissed the appeal and sent the matter back to Superior Court for the continuation of the trial.
“The trial judge was faced with a fluid and very unusual situation,” the judges wrote in their decision, but the situation is censored.
“I’ve never seen a measure this broad to protect the identity of an informant,” said Toronto lawyer Rocco Galati. “I’ve always been opposed to any secret proceedings. This seems excessive. I can’t imagine how revealing the name of the trial judge would reveal the identity of the informant.”
The defence lawyers, Joseph Di Luca and Erin Dann, did not return requests for comment. Crown attorney Susan Magotiaux declined to comment through a Ministry of the Attorney General spokesman.
The full appeal decision was released to the appellant, the lawyers involved and the trial judge on Nov. 20. After they reviewed it and presented further submissions, the court decided to publicly release the heavily censored version on Dec. 5.
Galati said this decision also presents another difficulty, more specific to the legal profession — the acceptance under the law that the Crown does not have to disclose information about a confidential informant to the defence as they build their case.
Ottawa criminal lawyer Michael Spratt said that can hinder the ability of the accused to mount a vigorous defence.
“The courts have been clear on the limited information we can receive about informants, and that of course puts us at a great disadvantage when we’re actually testing what these confidential informants say to the police,” he said.
“You can have informants who have lengthy criminal records … and may have great financial or other incentives to provide misleading information about our clients, and the less that we know about those people, the more the risk is that false information could lead to wrongful convictions or illegal searches.”
Spratt said that heavily censored court decisions go against the open courts principle, which has long been recognized by the Supreme Court of Canada as a fundamental principle of the legal system. He said it’s difficult to know if the censoring was justified in this case due to the dearth of information.
He said that the open courts principle has been “under attack” lately, pointing out that courts often tend to err on the side of caution and keep more details secret than might be necessary.
Former Supreme Court of Canada justice John Major said that if he were judging the case, he would like to see more information.
“I would want to know the why,” said Major, now a lawyer with Calgary-based firm Bennett Jones. “In my view, one of the only compelling reasons would be that it’s to protect somebody’s life. The only hope we have of knowing is when the final judgment comes out. If it’s not also redacted.”
More on the open courts principle:
Secrecy cloaks identity of toddler who died at hands of her parents
Judge asks police investigating Rob Ford for search warrant list
Publication bans and the open court principle in Canada

What the press did not publish is that a very large number of decisions are NOT reported at all, and are effectively buried, especially those that deal with Criminal offences by Lawyers like

The Judges who bury that information are

Tim Minemma a former lawyer for the Kingston CAS

Jennifer Belishen, a former lawyer for the Ottawa CAS

Justice Monique Metivier who gives orders for custody without hearings or notice, exparte and then resigns to avoid an investigation by the Judicial Council.

Justice Robert Maranger who turns a blind eye to fabrication of Evidence by CAS lawyers and corrupt evidence fabricating police.

its' all part of the tag team against fathers, the Ontario Governments Male Sharia Law, their