House of Commons guards cheered by MPs in Parliament 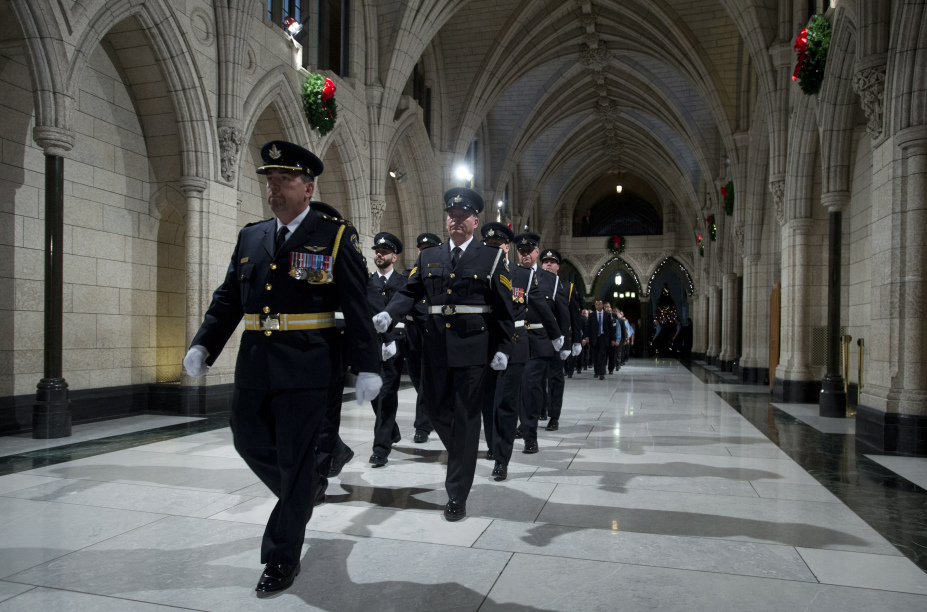 OTTAWA – Security officers who guard the House of Commons were given a rousing tribute in the chamber they are there to protect.

As part of the winding down of business before the Christmas holidays, Speaker Andrew Scheer threw open the doors on Thursday and allowed dozens of guards on the floor of the Commons while M-Ps cheered and applauded.

He says he wanted to acknowledge the courage and professionalism of the detail in light of the Oct. 23 attack.

Scheer says their quick response after a gunman stormed Centre Block “most certainly prevented an even more tragic conclusion to the day’s events.”

Michael Zehaf-Bibeau, the gunman, murdered Cpl. Nathan Cirillo at the foot of the national war memorial and then stormed Parliament Hill before being fatally shot by security staff outside the Parliamentary library.

Scheer acknowledged Samearn Son, a 10-year veteran and one of the unarmed guards who was injured trying to stop the gunman.

Canadians and Canadian politicians will unfortunately put their heads in a collective sandpit when it comes to addressing the route causes of terrorism and in particular the cause of lone terrorists who heed the call of ISIS to engage in the killing of Canadians in Canada.

One one side we have Islamic extremists who believe in violence as a way of changing and removing corrupt governments. Their belief is that Politicians and political parties cannot prevent what they view as Korruption and or immoral behaviour by government.

The fact is, Canada promotes such terrorism by failing to address the concerns of those who allege systematic corruption of government, of the police and what is regarded as "The Authorities" The home grown lone or groups of ISIS sympathizers see that there is no hope of bringing any change to Canada and its a valid point.

Under those circumstances, it make ISIS propaganda easy to believe.

Our Gutless Cowardly Politician don't give a collective Rat's behind as to the absence of the Rule of Law in Canada or the Corruption and injustice that is rampant in Canada today.

Judges like Monique Metivier issue orders for custody of children without hearings, without notice and Exparte to Rubber STamp what ever Ottawa's Criminal Organization called the Children's Aid Society of Ottawa asks for.

The Ottawa Police operate a Gender Superiority Program where the vilest example of immoral, unethical, Criminal behaviour is flagrantly promoted by the Ottawa Police.

The Ottawa Superior Court is riddled with Corrupt Judges who "Rubber Stamp" what ever the Authorities ask for. They turn a blind eye to police obligations for disclosure and turn a deliberate blind eye to Criminal offences by Judges, by Police and worst of all, turn a blind eye against the "Gestapo" that's the name Ottawa Lawyers refer to the Children's Aid Society of Ottawa.

If you want to meet the route causes of Terrorism and lawlessness in Canada take a visit to 161 Elgin Street.

Don't bother trying to visit any court room. They have now closed public access to the courts. Not that you could know which court room had the dirty deeds going on. You see, they change those at the last moment and restrict them to the public.

It was probably easier attending a court in Stalin's Russia or H.it.lers Ger.many.