The province is replacing a 1939 law that was used to give police broad powers of arrest during the G20 in Toronto. 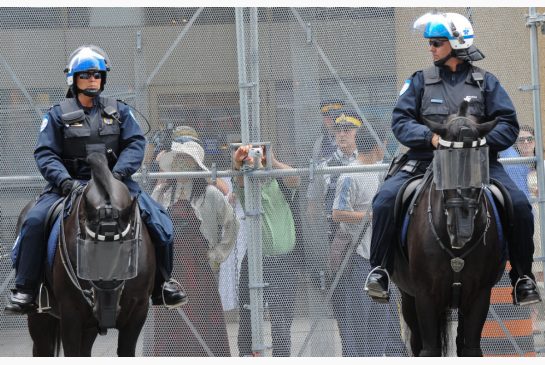 During the G20 summit, people were misled into believing a regulation giving police broad powers of arrest applied to a zone stretching five metres outside that secure area.

By: Robert Benzie Queen's Park Bureau Chief, Published on Thu Dec 11 2014
The Ontario government is finally replacing the “G20 secret law” — more than four years after police heavy-handedness at the summit of world leaders in Toronto.
On Thursday, Premier Kathleen Wynne’s Liberals, backed by the Progressive Conservatives, passed Bill 35, the Security for Courts, Electricity-Generating Facilities and Nuclear Facilities Act by a vote of 73-15.
That’s the legislation replacing the Second World War-era Public Works Protection Act that gained infamy during the G20 when then premier Dalton McGuinty’s Liberals used it to pass a regulation giving police broad powers of arrest.
It was enacted to guard hydroelectric facilities against Nazi saboteurs, but Queen’s Park realized it was badly outdated after the G20.
The regulation passed by McGuinty’s cabinet was supposed to only clarify police powers within the secure summit site at the Metro Toronto Convention Centre.
But people were misled into believing it applied to a zone of five metres outside that cordoned-off area.
Even though only two of the 1,105 arrests made during the summit protests were linked to the 1939 legislation, there was a massive public outcry over what became known as the “G20 secret law.”
Both the Conservatives and the New Democrats repeatedly urged the Liberals to replace it.
Tory interim Leader Jim Wilson said his party was “outraged” that Ontarians’ civil liberties were trampled upon.
“Any reasonable person would say the right thing to do would be to side with the government and change (the) law,” said Wilson.
“It’s a question of justice.”
But NDP Leader Andrea Horwath said her party dissented Thursday because the new law has “very, very serious flaws” and does not go far enough to protect people’s rights.
Horwath noted anyone going to a courthouse will now have to produce identification before gaining entry and could have their vehicle searched.
“That is . . . an encroachment of current civil liberties,” she said.
Community Safety Minister Yasir Naqvi pointed out the new law is based on recommendations from a 54-page government-commissioned report by former chief justice Roy McMurtry.
“It really strikes the balance between civil liberties and personal safety and security,” said Naqvi, noting, in 2011, McMurtry urged that any new legislation focus on security at courthouses, nuclear facilities and other large electricity-generating stations.
Anyone hoping to enter such premises would be required to identify themselves and be subject to searches “where reasonable.”
Under the new measure, scofflaws will face fines of up to $2,000 and jail sentences of up to 60 days.
The government believes the law closes the loopholes that Toronto police exploited — or misinterpreted — during the G20.

The G-20 Secret Law is nothing when it is compared to Ontario's Child Protection secret courts and a cartel of criminal private corporations paid a Billion Dollars a year in what is largely a promotion of violence against fathers by women, that provides the most violent of mothers with Unlimited Legal Expenses.

There is No accountability for this cartel. Lawyers refer to that as "The G.estapo". The Ontario Governments over the last 100 years have enshrined a K.or.upt sytem that appoints the least suitable vile personalities as Judges who then make "Rubber Stamp" decisions for the CAS.

Now Ontario has filled the Ontario Superior court with former CAS lawyers, even Justice of the Peace are chosen from the worst suitable personalities most likely to make a K.orupt decision that favours the government authorities which is nothing less than a Government Promotion of Criminality.

Welcome to Ontario, the province that funds criminal organizations and makes the judge jury and executioner without any legal due process.

The Liberals have over the decades have ever increased their Billions of dollars of Taxpayer money in support of Criminals disguised as Police, Child Protection workers and Judiciary.

A classic example is Det. Peter Van Der Zander of Ottawa who personally fabricates evidence to NOT charge the most violent of female offenders.

Van Der Zander used to be part of the Ottawa Police Partner Assault group. After he Committed a host of criminal offences, his superiors Staff Sgt. Isobel Granger, Norm Friel and even the Deputy Chief of the Ottawa Police turned a blind eye and promoted this insult to humanity.

If you have any information regarding this Child Abusing evidence fabricating former member of the Canadian Army and Army Cadets drop us a line.

Na.zi saboteurs exist today. Take Ontario Superior Court Justice Monique Metivier who takes orders from the Children's Aid Society of Ottawa Exparte Orders for Custody without any hearing or notice of hearing, to cover up for blatant Obstruction of Justice by a CAS lawyer Marguerite Lewis and CAS Ottawa Supervisor Rob Godman.

The Ontario Government supports Criminal Child Abuse and offences against the administration of justice. They use their Attorney General to silence any criticism and to litigate against anyone who attempts to bring private prosecutions against any person employed by the Ontario Government in their Gender Superiority program that results in Ontario, 99% of children in custody matters being "Placed" with mothers simply because of gender and without any regard for incontrovertible evidence that may exist showing the female custodial parent is extremely violent.


Ontario Operates a Fas.Cist State with a policy of Gender Superiority that exists from the lowest police constable to the former CAS lawyers anointed as Judge of the Ko.rupt Ontario Superior Court of Justice.

Ontario is a dangerous place for parents and children, especially fathers who have no legal rights in Ontario.