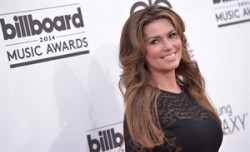 Shania Twain arrives at the Billboard Music Awards at the MGM Grand Garden Arena on Sunday, May 18, 2014, in Las Vegas.Twain has lent her voice to an RCMP campaign against family violence.In a 60-second video posted online by the Mounties the singer tells viewers that violence inside the home shouldn't be kept a secret. THE CANADIAN PRESS/Photo by John Shearer/Invision/AP

In a 60-second video posted online by the Mounties the singer tells viewers that violence inside the home shouldn’t be kept a secret.

Speaking over a twangy guitar track, she says “sometimes home is where the hurt is” and adds that whether it’s physical, sexual or emotional “abuse is abuse.”

Twain says family violence can happen in any family and is “never acceptable.”

She calls on victims to contact someone they trust and report incidents to police.

The RCMP says family violence makes up one-quarter of all police-reported violent crime.

“You can break the silence. There is always someone who can help,” Twain says.

Its got so bad in Ottawa that men are terrified of calling the Ottawa Police who are all too willing to fabricate evidence to NOT charge violent women.


Check out the wanted pages at Ottawa Mens Centre