Ottawa inked or amended $93.2 million worth of advertising contracts in 2013-14, a Star analysis of ad contracts shows. 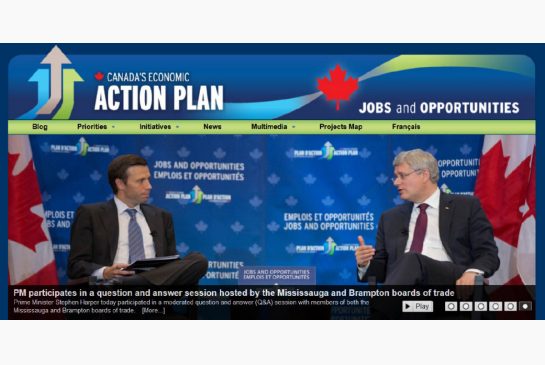 By: Alex Boutilier Staff Reporter, Published on Sun Dec 14 2014
OTTAWA—Ottawa inked or amended more than $93 million in advertising contracts last year, and nearly $500 million over the past five years, according to a Star analysis of Public Works contracting data.
The maximum value of last year’s contracts came in at $93.2 million, the analysis shows, and the work covers both the provision of advertising services as well as media buys and ad placements.
Public Works noted the final bill will only be made public in Ottawa’s annual advertising report, released 12 to 16 months after the end of the fiscal year.
“The contract values are the maximum the government is contracted to pay suppliers ... They are not the actual payments made to a supplier,” the department noted in a prepared statement after the Star requested an interview.
“The total value of payments made to advertising firms is reported in Public Works’ annual report on advertising.”
But contracting history from the last five years shows the contract value is a reliable indicator of the overall bill. Between 2009-10 and 2012-13, Public Works reported $367.1 million in advertising spending. The contract value data puts the figure slightly higher, at $413 million.
The difference between the two figures represents contracts coming in under budget, or altered after the initial deal was struck.
Even with that variance, the data shows that Ottawa’s total spending on advertising services is rapidly approaching $500 million over the past five fiscal years.
“This government has almost spent half a billion dollars on government advertising ... and at the same time they’re telling veterans and other Canadians that the cupboard is bare,” said Mathieu Ravignat, the NDP’s Treasury Board critic.
“It takes a certain amount of cognitive dissonance to say both of those things at the same time.”
The majority of the 2013-14 contracts went to Cossette Communications, the Quebec-based advertising firm that for years has served as the government’s go-to ad-buying agency.
A spokeswoman for Cossette’s Montreal office, Marilyne Levesque, said most of the money associated with those contracts flows through the company to purchase ads, with the company taking a percentage.
According to the government’s last official report on advertising activities, spending hit a five-year high at $136.3 million in 2009-10. Between 2010 and 2013, spending ranged between $69 million and $83 million annually.
The lion’s share of that spending went to television ads, costing federal coffers $33 million in 2012-13 — a full 60 per cent of all ad spending that year. The next largest amount went to Internet ads, totalling $10.9 million or 19 per cent of advertising spending.
Among major campaigns, the government’s ubiquitous “Economic Action Plan” advertisements cost $14.9 million, followed by ads focusing on “Responsible Resource Development” ($8.2 million) and a campaign promoting tax cuts ($7 million).
All three are likely to figure prominently in the Conservatives’ 2015 bid for re-election. Liberal MP David McGuinty accused the government of using public funds for partisan gain.
“What the prime minister is doing, what his government is doing ... there’s only one word to describe it: they’re cheating. They’re cheating because they’re using public resources to further their chances of electoral success,” said McGuinty.
McGuinty has written to Finance Minister Joe Oliver to urge him to adopt his private member’s bill, C-544. McGuinty said the bill would give the auditor general’s office the authority to nix public ad campaigns that too closely resembled political messaging.
The Star requested an interview with Public Works Minister Diane Finlay’s office on Monday. Outside of the department’s response, a spokesman for the minister’s office said they had nothing to add.

Canada is systematically corrupt. The primary cause, the borderline personalities and psychopaths, the delinquents of society who have been and are our gutless cowardly politicians who believe in Good Politics rather than Good Policy, an expression that even Harper acknowledges.

Ontario is the rectum of Canada and produces the excrement of society called the Judges of the Ontario Superior Court who, operate a Fas.cist program of "Gender Superiority" that has resulted in 99% of children in Ontario custody cases being given to mothers even the most violent mothers on earth.

The Culture of Abuse of Power is no where more evident than in the Children's Aid Societies of Ontario. Ottawa, where Mr. Harper and Mr. Trudeau live, is a classic example of Criminals with Absolute Power and these two politicians don't give a dam.

Mr. Harper, Mr. Trudeau and Peter McKay are also fathers and live in Ottawa and don't give a dam about their local CAS lawyers Fabricating evidence in the court room to illegally incarcerate children, even children when they are citizens of other countries such as Russia and Australia.

While we have Gutless Cowardly Politicians who turn a blind eye to Criminals in positions of absolute Power, Canada will continue to have an escalating economic and social time bomb that is slowly exploding in front of them but they all keep their heads in their personal buckets of sand.