Victims range in age from 18 months to 15 years and police believe injured woman is the mother of seven of the children.

Australia police say eight children between the ages of 18 months and 15 years were found dead at a house in Cairns suburb Friday.

By: Kristen Gelineau Associated Press, Published on Fri Dec 19 2014
SYDNEY, AUSTRALIA—Eight dead children and a woman suffering from stab wounds were found inside a home in a northern Australian city on Friday, police said.
Police believe the 34-year-old woman with chest wounds is the mother of seven of the children, and the eighth child is believed to be one of her relatives, Detective Inspector Bruno Asnicar said. She was receiving treatment for her injuries and was in stable condition at a hospital.
Queensland state police said they were called to the home in the Cairns suburb of Manoora on Friday morning after receiving a report of a woman with serious injuries. When police got to the house, they found the bodies of the children inside, ranging in age from 18 months to 15 years.
Asnicar declined to say how the children died. 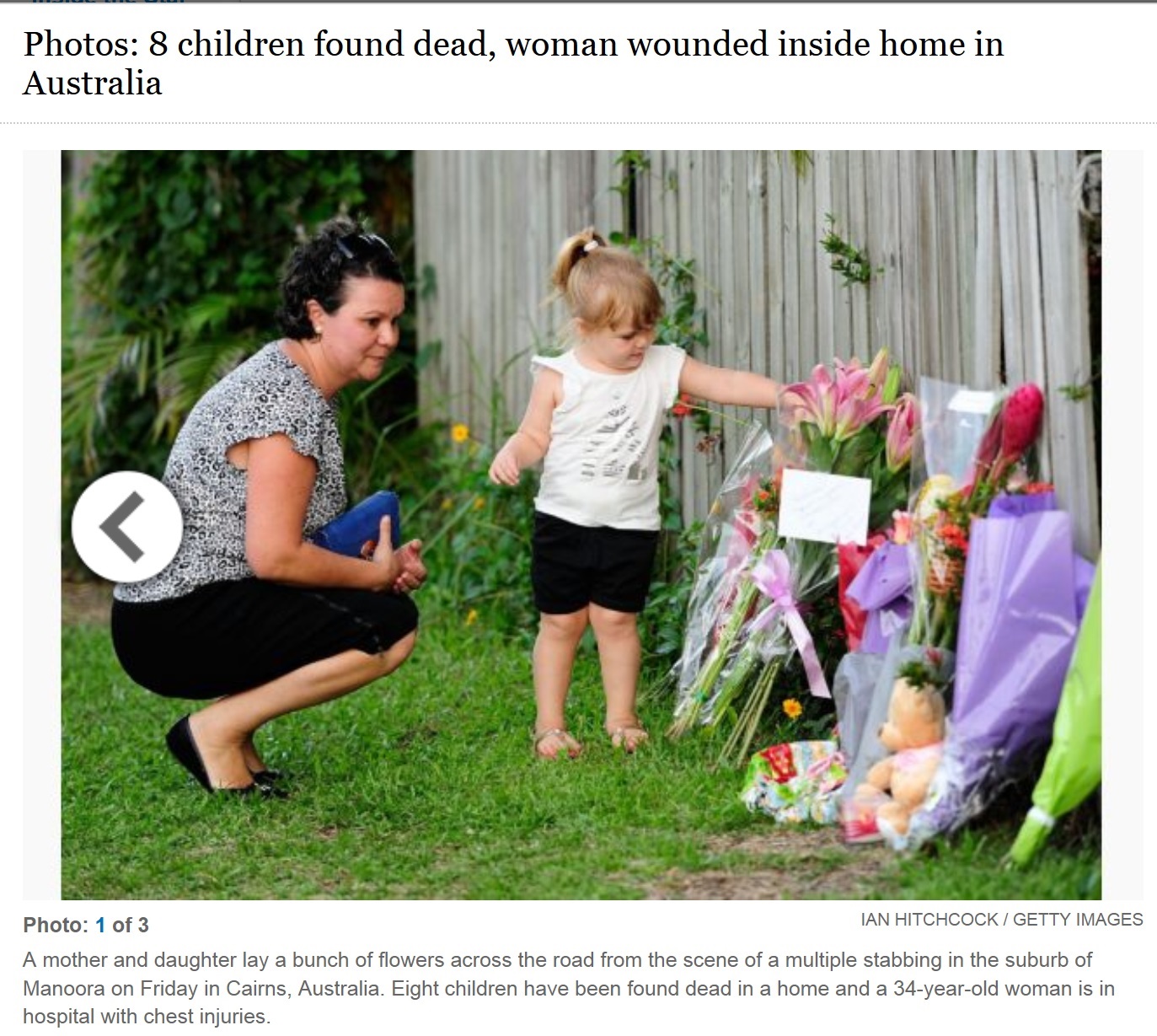 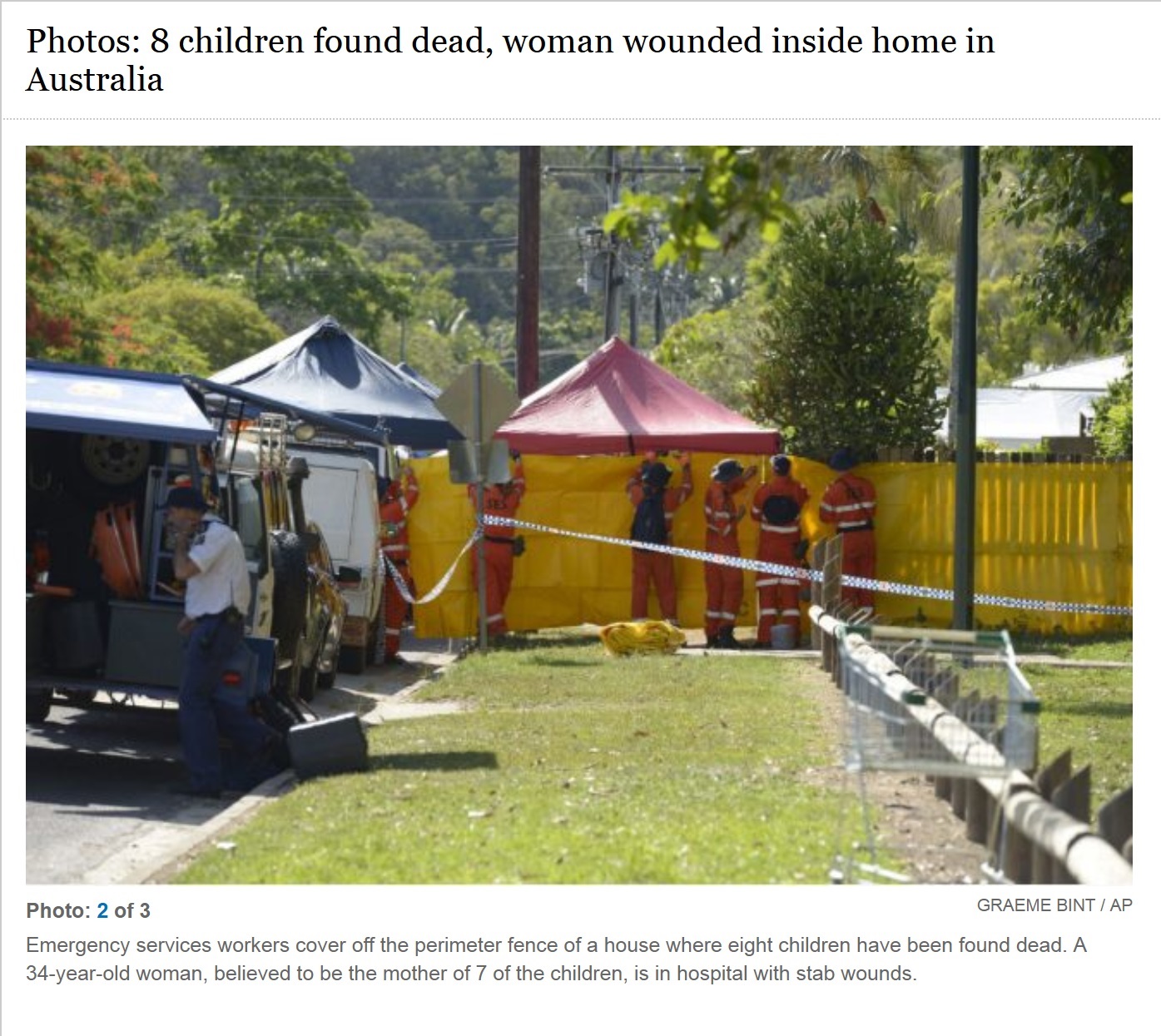 He said he didn’t believe there was a multiple murderer still at large and that police were talking to the woman. Asked if she was a suspect, he said officials have not yet identified any suspects and were questioning everyone who had contact with the family in the past 2-3 days.
“As it stands at the moment, there’s no need for the public to be concerned about this other than the fact that it’s a tragic, tragic event,” Asnicar said. “The situation is well controlled at the moment. There shouldn’t be any concern for anyone else out of this environment.”
Lisa Thaiday, who said she was the injured woman’s cousin, said one of the woman’s other sons, a 20-year-old, came home and found his brothers and sisters dead inside the house.
“I’m going to see him now, he needs comforting,” Thaiday said. “We’re a big family. ... I just can’t believe it. We just found out (about) those poor babies.”
The street has been cordoned off and a crime scene will remain in place for at least the next day, Asnicar said.
Dozens of police descended on the home, and crowds of locals stood outside the police barricades, some of them wiping away tears.
“These events are extremely distressing for everyone of course and police officers aren’t immune from that — we’re human beings as well,” Ascinar said.
The tragedy comes as Australia is still reeling from the shock of a deadly siege in a Sydney cafe earlier this week. On Monday, a gunman burst into a cafe in the heart of the city and took 18 people inside hostage. Two hostages were killed along with the gunman after police stormed in 16 hours later in a bid to end the siege.
“The news out of Cairns is heartbreaking,” Prime Minister Tony Abbott said in a statement. “All parents would feel a gut-wrenching sadness at what has happened. This is an unspeakable crime. These are trying days for our country.”

It is far too soon for any commentary to be made however one will be made as soon as more facts are released.

With "no suspects" it suggests that there is no other person responsible for the murder of the children other than the mother who appears to have been suffering some serious mental health problems.