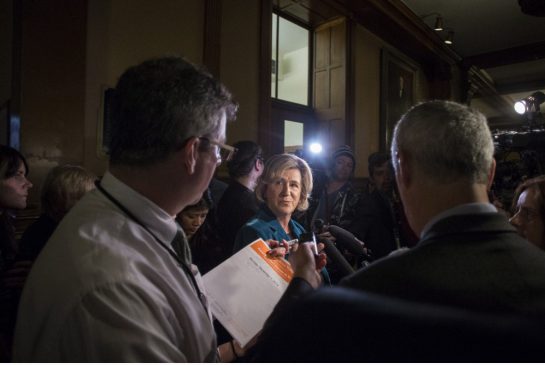 Helena Jaczek, Ontario's Minister for Community and Social Services is surrounded by the media following question period at Queen's Park Legislature in Toronto earlier this month.

By: Donovan Vincent News reporter, Published on Fri Dec 19 2014
Ontario is paying $5 million to cover unexpected costs caused by its troubled new welfare computer system, including thousands of overtime hours logged by workers dealing with improper payments and other glitches.
The Ministry of Community and Social Services quietly pledged the money in a letter to municipalities earlier this month, an allocation that doubles the funding already paid to train staff and implement the $240-million Social Assistance Management System (SAMS).
Amber Anderson, press secretary to Ontario’s Community and Social Services Minister Helena Jaczek, confirmed the payment in a statement to the Star on Thursday, saying the money will go toward overtime, temporary staff and other related costs.
“We understand that this has been a challenging experience for our frontline case workers and this additional funding will help local offices with their transition,” Anderson said.
The new computer system, which is used to administer welfare and disability payments to hundreds of thousands of recipients across the province, has been plagued with problems since it was launched in mid-November.
Fred Hahn, CUPE Ontario president, said the money won’t fix the larger issue.
“This is throwing good money after bad,” Hahn said. “The SAMS system isn’t working. People working with the system are telling us it’s not working.”
Anderson said the province’s spending on its Ontario Works (OW) program delivery is lower than expected this year, so the additional money will be coming from existing funds in the administration budget for OW.
The payment was agreed to after municipalities contacted the province to say they are facing mounting costs from the new system.

Sarah Pennisi, a director for social assistance and employment opportunities in Niagara region, told the Star Thursday that frontline Ontario Works staff in the region’s five offices logged 1,000 hours of overtime in November working with SAMS, and she expects the same number of extra hours to be logged this month. Her municipality is receiving $156,000 of the $5 million.

More than half of Niagara’s allocation is going to overtime, she said.
The new computer software platform, built by a Dublin-based company called Curam, now owned by IBM, handles Ontario Works and Ontario Disability Support Program files and payments.
It has proved a nightmare for the province and Premier Kathleen Wynne.
Late last month what Wynne describes as a “glitch’’ with SAMS caused the system to assign $20 million in overpayments to 17,000 cases — either individuals or families.
The province says it moved swiftly to recover the money, leaving what it says is about 90 overpayments left to be recouped from recipients, each averaging about $1,100.
But Ontario’s OPSEU and CUPE unions dispute those figures, arguing the number of overpayments is significantly higher. OPSEU adds that numerous recipients received no money late last month, or as little as $5 due to SAMS.
Both unions are calling for SAMS to be pulled and the previous computer system re-launched until SAMS’ issues are fixed. OPSEU filed an application Tuesday for an Ontario Superior Court injunction calling for SAMS to be yanked until it works properly.
Premier Kathleen Wynne apologized for the SAMS foul-up two weeks ago.
Since late last month several frontline case workers, supervisors and directors who work with the new system have described nightmares never before seen since SAMS’ launch in mid-November.
What were quick easy key strokes with the previous system, now take dozens of clicks and steps, workers told the Star.
Dealing with clients who didn’t get their social assistance in time, arranging repayments for those who got too much money — clients are being clawed back 5 per cent a month to recoup overpayments — and other functionality problems with SAMS, have left many case workers and supervisors frustrated.
“The challenges (with SAMS) are certainly continuing,’’ says Petra Wolfbeiss, a spokesperson for the Ontario Municipal Social Services Association, a group representing municipal workers, commissioners, and managers in the province.
Despite the wide-ranging complaints about SAMS, Pennisi, the director from Niagara, says the system “holds promise’’ and she stopped short of calling for it to be shut down for improvements.
“If the province was able to dedicate more resources to support the transition (to SAMS) I think it can be done. But the support is not there right now,’’ she said.
The province says it is providing support, including a payment hotline, which OW staff can call to receive support for any specific functional issues they may encounter, an email address for access and login issues, and job aids and troubleshooting guides.
IBM/ Curam officials continue to support the ministry with the transition to SAMS, and they’ve been dispatched to local offices to provide additional supports to workers, Anderson said.

Another diversionary story by the government to divert attention or ignores the Mega Billions of Dollars spent by the Ontario Government's Fascist Program of Gender Superiority.

With billions spent on the corrupt criminal cartel of unaccountable Children's Aid Societies, and around 74% of police budgets spent on Ontario's war on fathers, its effectively a Nazi Cult that believes fathers are a sub human species devoid of legal rights.

Its results in 99% of children in Ontario courts being given to women even when they are the most violent ones.

In Ottawa CAS Lawyer Marguerite Lewis is a typical CAS lawyer who fabricates evidence blatantly before Judges like Timothy Minnema, who, was previously a lawyer for the CAS.

This particular judge is not much different from the other judges who used to work for Ontario's Criminal Cartel and who expect that the public will believe they suddenly changed from being criminals to being "judges".

The Dishonourable Timothy Minnema was an probably still is a member of the Dutch Reform Church which during WW2 was notorious for collaborating with Nazies. Now he continues to act like a Nazi by personally fabricating evidence, and making endless decisions for mothers and authorities that stink.

This vile underbelly of the Judiciary can fabricate evidence personally, ignore fabrications in front of him that he knew was false, and then make a decision based on fabricated evidence.

When made aware of the fabrications he does nothing.

Tim Minnema is just one of many former CAS lawyers who corrupt the Justice system in Ontario and who are the worst forms of criminals in society who have absolute power and who abuse that power absolutely.

Tim Minnema will do the world a favour when he retires or finds some other way of turning up his judicial toes.