Robert Ireland's foster daughter made allegations of sexual assault against him, never leading to a charge or conviction. His recent application for a transit job ended after the allegations appeared on his police check 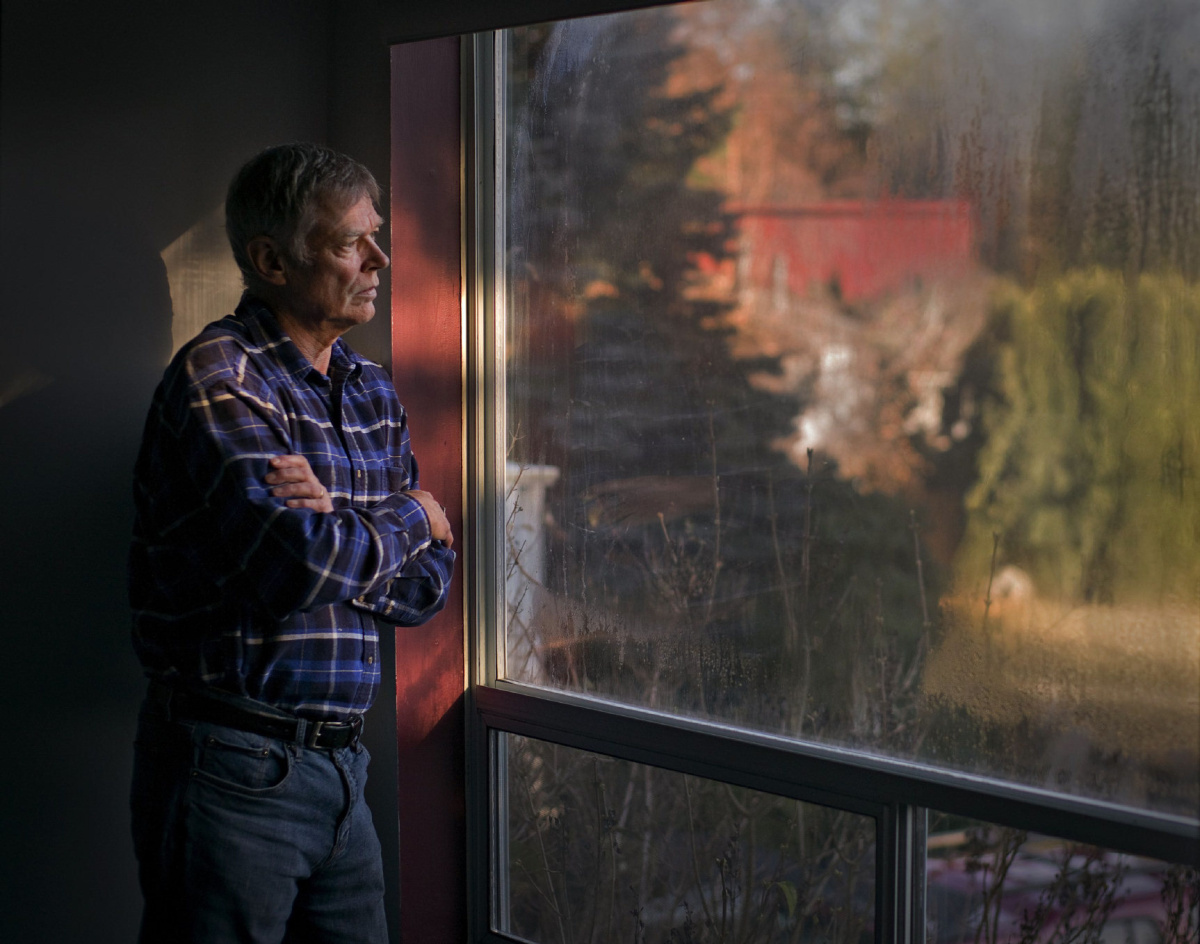 Bob Ireland at his home in B.C. Ireland was falsely accused of sexual assault by his former foster child, and his family has suffered financial ruin.

It was a stunning allegation from the mouth of his little girl.

Robert Ireland’s foster daughter, whom he cared for in his seaside B.C. home for nearly a decade, made allegations of sexual assault against him shortly after she left in 2012, when she was in her early teens.

Her claim, investigated by police, never led to a charge or conviction. But it remains on his record, continues to undermine his ability to work and support his family and has changed the former police officer’s life for good.

“I was devastated,” says Ireland, 64, a married father of one daughter, another adopted girl and former foster parent to several children over the years, including the accuser and her brother.

“This was my daughter. I loved her. I never thought I’d ever be accused of anything by her. I was a basket case for six months after.

“I’m close to all my kids. I’d take them on ski trips and to Disneyland. I loved bringing them up in the world and seeing a difference.

“Her allegations are completely untrue.”

Because the RCMP routinely release “non-conviction” records as part of employment background checks, Ireland’s recent application for a position with a provincial transit company suddenly ended after the unproven allegations appeared on his police check.

The girl’s allegations in 2012 also led to Ireland and his wife losing their foster parenting contract, which removed the accuser’s brother and another foster child from their home. They have not been able to serve as foster parents since.

A Star investigation has found three other men were similarly accused of sexual assault by the same girl.

An ongoing Star investigation has detailed how the routine release of police-held information about innocent Canadianshas ended careers, undermined job prospects and forced students out of university and college programs.

The information has also ended up in the country’s criminal records database, which is accessed by U.S. border officials, who have used it to restrict the travel of Canadians.

In some cases, even mental health calls to 911 have appeared in police checks on people crossing the border or seeking employment in vulnerable sectors such as hospitals and daycares, the Star investigation found.

Among the four men who have had their lives affected by sexual assault allegations from Ireland’s foster daughter is another former foster father. In 2005, B.C. Supreme Court heard allegations from her that the man “took her into his bedroom and sexually assaulted her” on two occasions between March and May of 2002, according to the court ruling.

The man, who is identified in the court record only as M.B. to protect the identity of the girl, denied the allegations and “spoke of his love for her then and now,” the ruling reads.

M.B. was found not guilty of the allegations.

“It was a traumatic experience,” M.B. said in an interview this week. “It almost ruined my life. It hasn’t gone away after all of these years. And the worst part is that we lost communication with foster kids who had been in our home for years and we loved.”

He says his regular trips to the U.S. for his job require him to carry documentation detailing the charges and acquittal.

“It’s embarrassing to have to talk about what I was accused of. It never goes away.”

His wife said in an interview the girl’s allegations “destroyed our lives. Ten years later, just talking about it leaves us shaking. We loved her and still love her. But whenever an allegation like that comes up, people assume you’re guilty.”

Three years ago, while still in Ireland’s care, the girl made allegations of sexual improprieties against her school bus driver.

“She accused him of inappropriate conduct, that he was coming on to her,” says Randy Gould, who runs the local school bus company where she attended school. “There were lots of other kids on the bus at the time.”

Gould says he didn’t believe his driver, a man in his 50s, had assaulted the teen. But he had to fire him.

“When someone gets accused, the guy is tainted. That’s the shame of it all. The truth did not matter when it came to him. For a school bus company, it’s a nail in the coffin.

“I had to take him off the run. It cost him his job. It affected his marriage. The look on his face, it would make you cry. I was sick about it myself.”

The girl also made similar allegations against a former boyfriend shortly after she left Ireland’s home, say Ireland and the girl’s brother, who spoke with the Star on the condition of anonymity.

The man who was the target of those allegations declined comment.

In Ireland’s case, the allegations landed with equal parts personal devastation and professional peril. He agreed to be interviewed by the local RCMP detachment following the allegations, and four months later, the case was closed.

The girl’s brother, who also lived with Ireland and his wife, said he believes none of her allegations.

“She is troubled,” he said in an interview, adding that his sister was happy in the Ireland home until the last several months, when she began causing arguments.

“There’s no way the things she said actually happened. The dates and times make no sense. I was there. I never saw anything like this. And she has a pattern of doing this every time she feels like a she’s losing her connection with a man.”

The brother returned to Ireland’s home, several months after he was removed by child protection services, to live informally with his foster family. He’s studying in Vancouver, but he still calls Ireland “Dad.”

Last year, Ireland applied for a job as a bus driver with the South Coast British Columbia Transportation Authority. He took a driver’s exam, paid for a medical, had extensive interviews and provided several employment references.

Those written references from his former employers are unanimously positive. One describes him as a hard worker with “good attention to detail” and concludes that Ireland was “committed to his job and to his foster children. I trust him.”

Another is a “glowing review,” the transit authority recruiter noted. A third former employer described him as “very intelligent,” “good demeanour” and “good guy,” and a fourth described Ireland as “my right hand man.”

Among the employment application forms he filled out was one that asks the question: “Do you have a Criminal Record for which you have not received a pardon?”

“I used to be a police officer,” he told the Star. “I don’t have a criminal record at all. I’ve never had any problem with the police.”

The final stage of the application, he was told, was a criminal record check.

“Nobody ever told me I had this record. I was at the police station getting it and the clerk says, ‘You know you have a non-conviction record? You have to tell your employer about it.’ I said, ‘What? You’ve got to be kidding me.’ I was shocked.”

He was then forced to hand the record over to the transit authority.

“The whole mood of the employer changed, as I had to reveal what this meant and they had to contact the RCMP to confirm. I was shocked that I had to reveal the circumstances of this case to someone who I didn’t even know.”

Shortly after that, Ireland says he was eliminated as a candidate for the job.

A spokesperson with Trans Link refused to comment for this story.

In response to his complaint about the record disclosure, a July 16 RCMP letter confirmed the force, as a matter of policy, discloses a wide range of records in police checks, including “dispositions of non-conviction.”

The force has repeatedly refused to purge the record, Ireland says.

RCMP officials did not reply to requests for comment.

“This is quite outrageous as I am a good person, and have never been in trouble with the law before. This violates my Charter rights, human rights and privacy rights.”

His finances have been hit because of his now limited employment options, he says.

“I’m living on credit cards. We had our bill up to $50,000 and we had to pull out some money from the mortgage, which saved us,” says Ireland, who remains unemployed.

Two weeks ago, Ontario’s provincial minister of community safety and correctional Services told the Star his government will table legislation in the new year detailing for the first time what information police can — and cannot — disclose to employers, volunteer agencies and academic institutions about Ontarians who have not been convicted of a crime.

But that law will not affect the RCMP and police forces outside Ontario. There is a patchwork of policies and lots of discretion among individual forces about what they can release.

“This is a national issue and police services across the country have radically different practices,” says Abby Deshman, a lawyer and director with the Canadian Civil Liberties Association. “I’m hopeful that Ontario will set a leadership example, but it has to be followed through by the federal government or individual provinces.”

Today, Ireland helps out with the soap business owned by his wife, who has multiple sclerosis. He says the unproven allegations have left his family financially ruined.

Since May of 2012, the family has had no income except for his wife’s disability pension. They’re living on retirement savings.

And they miss the rewards and challenges of raising foster children.

“I’ve been devastated by this. Police should never have this power.”

It's the RCMP's way of destroying anyone without a conviction.

and vomit every time you see a cop.