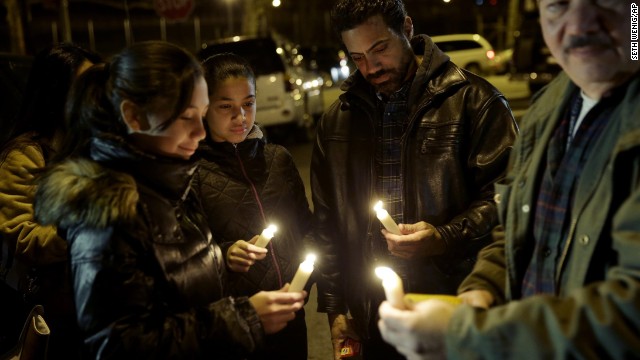 People light candles during a vigil on Sunday, December 21, for two NYPD officers who were ambushed and killed on Saturday. The two NYPD officers, Wenjian Liu and Rafael Ramos, were shot while sitting in their police car. Police have named Ismaaiyl Brinsley as the shooter.

Editor's note: Errol Louis is the host of "Inside City Hall," a nightly political show on NY1, a New York all-news channel. The opinions expressed in this commentary are solely those of the author.

(CNN) -- We don't yet know what polluted swamp of mental sickness led Ismaaiyl Brinsley to embark on a multistate rampage that culminated with the barbaric, execution-style killing of NYPD Officers Wenjian Liu and Rafael Ramos on a New York City street.

But the madman's actions could not have happened at a worse time for a city already embroiled in a bitter public battle over police-community relations. It's very possible that an important debate about race, policing and the proper use of force will be buried along with the martyred officers.

Weeks of street protests over a grand jury's decision not to indict police officers who killed Eric Garner -- along with Mayor Bill de Blasio's statements in sympathy with the goals of the demonstrators -- had already antagonized police unions (which, to make matters even more fraught, are in the middle of trying to settle a contract with the city).

Even before the slaying of the officers, a war of words between de Blasio and union leaders had grown strikingly bitter, prompting New York's most prominent cleric, Cardinal Timothy Dolan, to publicly call on both sides to ratchet down the rhetoric.

The call for civility hadn't yielded much in the way of results -- the unions continued to bash the mayor, and a street demonstration earlier this month for the first time turned violent, with a pair of police officers beaten on the Brooklyn Bridge.

"It's not a time for political analysis," said a somber de Blasio at a press conference Saturday, shortly after meeting with the families of the slain officers. The mayor appeared shaken, in part because while entering the hospital where the dead officers' bodies lay, he passed through a cordon of dozens of officers who pointedly turned their backs on him instead of saluting.

De Blasio's call for a temporary halt to political warfare didn't stop his adversaries from going on the attack.

Typical of the criticism was a Twitter message from former Gov. George Pataki, a Republican who has been floating trial balloons about a possible run for president. Pataki pronounced himself "sickened by these barbaric acts, which sadly are a predictable outcome of divisive anti-cop rhetoric of Eric Holder and Mayor de Blasio."

The statement is farfetched to say the least: Neither Pataki nor anybody outside the psychiatric profession has the slightest idea why Brinsley shot his girlfriend, traveled hundreds of miles to New York, randomly killed two policemen and then took his own life. Boldly claiming that the mayor and attorney general led Brinsley to murder by mere words raises a question Pataki can't possibly answer: Which speeches, exactly, made it all happen?

An even harsher tone came from police union leaders.

"There is blood on many hands tonight," said the president of the Patrolmen's Benevolent Association, Patrick Lynch. "Those that incited violence on the street in the guise of protest, that tried to tear down what New York City police officers did every day. We tried to warn it must not go on, it shouldn't be tolerated. That blood on the hands starts on the steps of City Hall, in the office of the mayor."

Watching the turmoil on television, you'd never know that New York is on track to register the lowest number of murder and other serious crimes since the city began tracking numbers in the 1960s. The city has never been safer -- but rarely has it seemed so divided and angry.

Both sides are guilty of excess and poor judgment. "Lynch's fulminations about legitimate policy differences have been destructively overheated," the New York Daily News said in a recent editorial, condemning the union president for circulating a form officers can complete that asks de Blasio not to attend their funerals if they end up killed in the line of duty.

The mayor, who has openly supported the sentiment of demonstrators protesting the police killing of Garner, made mistakes of his own. De Blasio should have issued a harsh rebuke to activists who recently marched through the streets chanting "Shoot Back!" and "What do we want? Dead cops!" The mayor should have agreed to Lynch's demand that protest leaders loudly and publicly disavow such violent rhetoric.

Can things get worse? Yes, they can. In 1992, cops upset at then-Mayor David Dinkins staged a rally at City Hall that turned into a near riot, with 10,000 officers taking over a bridge, tramping on cars, and booing and cursing at superior officers and elected officials.

We haven't reached that point in New York -- yet. But these are dark, troubled times in an urban center where 20 years of dedicated effort by police and community have mostly conquered the true, common enemy -- the city's criminals, who are surely enjoying the discord that allows them to thrive in our divided city.

While there is no accountability or Rule of Law that applies to police, it is to be expected that the those with a few essential screws loose and a firearm will be likely to start their own war that is also a suicide mission.

If Police want to END the killing of police, the first step will be for Police to demand their own accountability.

Ontario Canada promotes Criminal Offenses by Police. One Det. Peter Van Der Zander in Ottawa Fabricates Evidence NOT to charge females who attempt to strangle to death the full time fathers of their children.

Ever time a Rotten Cop gets away with Crime, it breeds a host of people with a pathological hatred of police who have only themselves to blame for failing to change the "Old School" culture that promotes Crime by Police and abuse of their absolute Power.

It's time for a change and that change is up to the Police if there are any with the courage to bring true accountability to policing.

Recently Ottawa Police Detective Peter Van Der Zander fabricated Evidence NOT to charge a mother. Officers found the father bleeding around the neck with scratch marks around his neck, consistent with an attempt to strangle. After numerous unprovoked assaults, she pulled his head down by the hair on to a couch and tried to strangle him to death.

Detective Van Der Zander also listened to a stereo audio recording of the entire event that was stopped after the police arrived and taken by the police so it could not have been "edited".

His video interview with the mother showed he was concerned that IF he let her go without charges that "next time" she might kill him with a knife" so he released her so she could "call police" next time to be driven home as a victim.

The video interview showed he never asked her IF she pulled his hair and or attempted to choke him. His written report was an utter fabrication and that's normal for Ottawa Police.

He then kept the father incarcerated for a further 16 hours and AFTER he released the mother, he finally interviewed the father, failed to photograph any of his injuries and interrogated him accusing him of being a pedophile without any such allegation or evidence to justify that terrorism.

Several months later she assaulted her new male partner with a Strangle Hold to the neck, "with her hands around his neck and her thumbs intertwined around his neck" saying " My Father was KBG, I know what I am doing". When that male reported the assault to Ottawa Police they did absolutely nothing. When she learned of his statement, she threatened him with false allegations which was in turn reported to the Ottawa Police who did absolutely nothing.