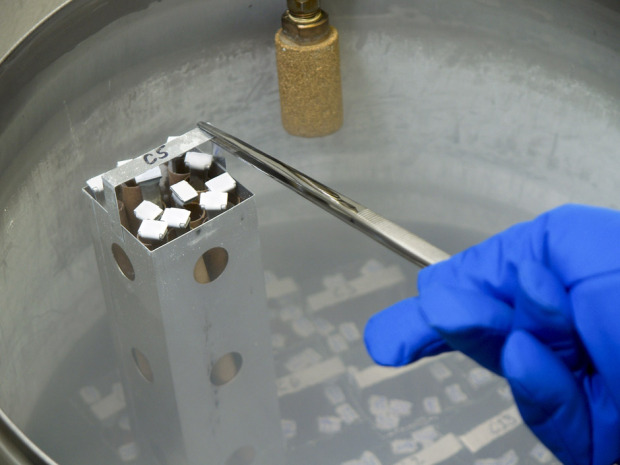 A container holding racks of frozen oocytes, or immature egg cells, are shown being pulled up from a liquid nitrogen storage tank. In situations where couples and single people make arrangements with sperm donors they know, the rights of the various parties remain largely unresolved.

A potential test case on the rights of sperm donors and recipients in a new age of unconventional parenthood was supposed to have ended for good last year.

That’s when the donor suddenly dropped a lawsuit against the lesbian parents of his biological son, and agreed to stay clear of the boy, now aged four, after a single, limited visit.

These people seemed to be stopping at nothing to get close to my child, and that’s a really scary thing

But the two women say now they were essentially hounded out of a northern Ontario town after the case wrapped up. They claim the donor’s parents followed them and drove repeatedly past their isolated home, while other residents subjected them to angry criticism.

Fearing the boy would be harassed when he started school, they relocated to British Columbia and have since moved to another part of Ontario.

“It was just an all-around awful situation,” said one of the boy’s mothers. “These people seemed to be stopping at nothing to get close to my child, and that’s a really scary thing … It’s a Pandora’s box. Once they say, ‘Hi, I’m your grandmother’ or ‘I’m your father,’ you can’t undo that.”

Their treatment underlines the need for clear laws on the issue, something most provinces lack, said Michelle Flowerday, the couple’s lawyer.

Legislation must make it explicit biological ties in such situations “do not constitute a claim to parenthood,” she said.

A court-ordered publication ban prohibits revealing the names of any of the parties.

The sperm donor’s parents tell a different story. If they ever came in contact with the family after the April 2013 settlement, it was purely by chance, said the man’s father, noting they live in Cochrane, a town of just 5,300 people.

He scoffed at the suggestion he and his wife ever trailed the couple and their son.

The donor’s father did say they abandoned the lawsuit for financial reasons, and were disappointed they could have no access to the boy.

“We won’t see him, I guess, unless maybe he comes back 20 years from now, or something,” he said Monday.

“We didn’t have much of a say, even if we are grandparents. We would have liked to see him once in a while, even if it was just maybe once or twice a year or something.”

Growing numbers of children are being born in Canada as a result of in-vitro fertilization and other forms of assisted reproduction, often to same-sex couples. When donations are obtained anonymously from sperm banks, and in the few provinces with laws that directly address the issue, parenthood is generally uncontested.

In situations where couples and single people make arrangements with sperm donors they know, however — especially in provinces like Ontario that lack such legislation — the rights of the various parties remain largely unresolved.

In the Cochrane case, the donor’s sperm was used for insemination done at home. The man signed a contract saying he would play no part in the child’s life.

Later, he had a change of heart and sued to get access to the child, saying he had been unfairly pressured by one of the women, a former high-school classmate.

The donor’s father said the woman “took advantage” of his son, whom he said is easily influenced.

A trial, with interest groups intervening, had already been scheduled when the case was unexpectedly settled. As part of the agreement, the sperm donor and his parents were allowed a one-hour meeting with the boy, but could not mention their relationship to him.

After that meeting, though, the couple say they saw the donor’s parents drive repeatedly past their rural home, 13 kilometres outside Cochrane, though there would be no other reason for them to be there. They also followed them while they were driving through the community.

Others also made life difficult, said the mother. One time, a woman approached them in a supermarket, knelt down and put her face inches from the boy’s head, staring at him and not saying a word, she said.

“It got to be so absurd,” she said. “I was constantly looking over my shoulder, constantly scanning the crowd at the store, at a mall, at an event … I was at my wit’s end and there was nothing I could do about it.”

She said they contacted police, but were told authorities could do nothing unless someone trespassed on their property.

Allegations of "stalking" are typical of the weapons used by extreme feminists including the Lesbian Mother's lobby group who actively encourage women to find unwitting c.perm donors many of whom are never aware that they are fathers.

In many cases, the "relationship" is terminated prior to or shortly after birth, and where the father's name is on the birth certificate, its treated like a lottery winning.

The usual decisions coming from Ontario Courts are that women get what ever they ask for and in the matters of custody and access, women tell judges what they want and judges simply act as "Rubber Stamps".

Ontario does not give a dam about the best interests of children or Children's rights to have a father, to receive his love and affection, to know their father in their day to day life.

The extreme Feminist, the Lesbian man haters, typically brain wash the children that result from women raping men, obtaining sex by fraud, in the Julien Assange style which may not yet be Rape in Canada but should be.

The same rampant man haters spend a large amount of their time promoting false statistics that become the basis of further false statistics that results in Billions of Dollars of Taxpayer funds devoted to Promoting a Fas.cist Agenda of Gender Superiority that deprives children and fathers of all their legal rights.

Thanks to Ontario's Cor.rupt Judiciary who undermine the rule of law and bring ill-repute to the Administration of Justice.

Its enough to make you want to puke.

It's called the "Supermarket Ambush".

Northern Ontario, like most of Ontario, is a cess pool when it comes to the promotion of hatred towards fathers.

A typical stunt practiced by the One Stop Divorce Shops of Northern Ontario is to follow a father to a supermarket or costco, and have an employee of the Women's Shelter or a hanger on, to put themselves face to face with a father for the purpose or writing a fabricated toxic affidavit designed to vilify the father.

The other stunt is a letter from the women's shelter or child protection worker that judges take "judicial notice" of and refuse to say anything that its full of hearsay, double hearsay and triple or more hearsay, all exaggerations upon exaggerations that have little actual basis or relativity.

This case is a story of two lesbian mothers hell bent on ensuring that a child never has a relationship with the child's father and that speaks volumes as to their lack of suitability to be entrusted with the responsibilities of being "parents" who can put the child's interests ahead of their own selfish most probably at least borderline personalities that typically appear coincidental with parents hell bent on selfish motives rather than the child's best interests.

Here is a child, with a father who wants to be an involved biological parent who will be denied that right and will grow up most probably to be brainwashed in hatred towards fathers and in particular told fictional justifications as to why they should never ever have had a relationship with their father.

It's another story of two sick selfish people hell bent on depriving a child of the love and affection of a father.

Why? Because we live in a Corr.upt Ontario with a Government policy of Gender Superiority that promotes violence towards fathers and the total absence of legal rights for children and fathers.

The CanLii decision can be found with a search of the name of the lawyer Michelle Flowerday.

As usual, the judge granted these two women, hell bent on alienating the child from the father, and the child's paternal grandparents, a comprehensive restraining order.

While the Judge issued a publication ban that prevents the paternal grandparents from taking pictures ect, these two women, one the biological mother, the other not, were quite happy to have their photograph published all over the internet and obviously recognizable to the small community in which they live in Northern Ontario.

That begs the question as to why that restraining order should have been issued, why it does not have a definite expiry date, and why the hell did the Judge make such Draconian effectively a life time ban on that child, even as an adult from having any substantive contact with that child's father or paternal grandparents.

That's typical in Kor.upt Ontario where Children and Fathers have no Legal Rights.

Interestingly the case was heard in Timmins, one of Ontario's most corrupt small cities where the Police used to run their own prostitution racket and where the former chief of police Joe Haywood was the Number One suspect in the murder of Mrs. Haywood.