Christie Blatchford: Luka Magnotta may be sick but he’s not crazy, fortunately the jury knew the difference 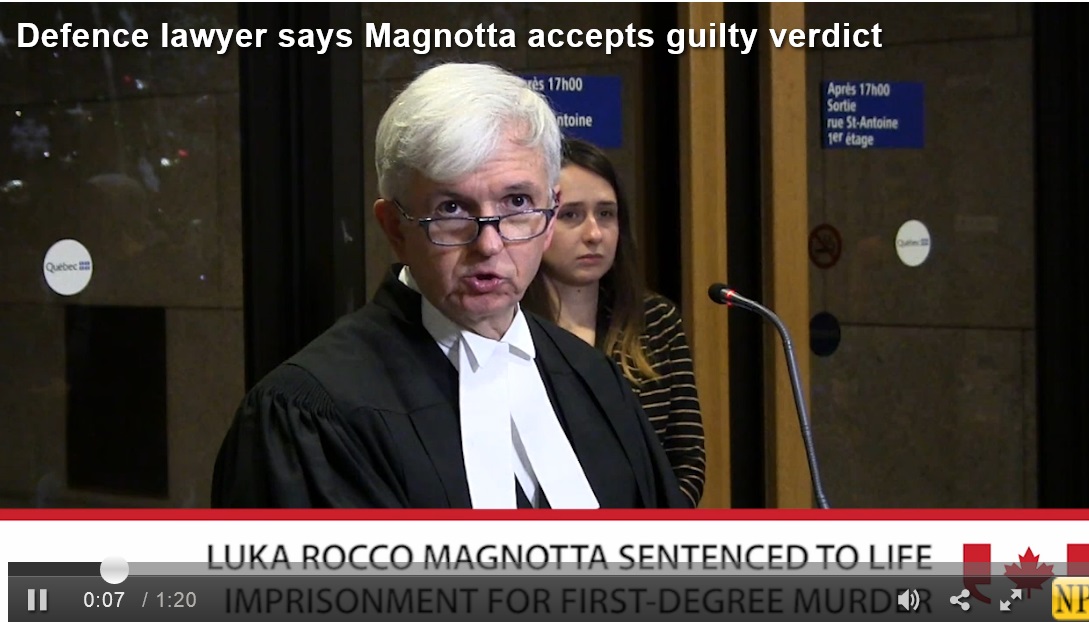 I burst into tears at the news — the what-were-they-doing-in-there, needlepointing-the-verdict-on-tiny-pillows-news? — that on the eighth day, a Quebec Superior Court jury found Luka Magnotta guilty of first-degree murder and four other charges.

The tears were of relief, nothing else — relief that the jurors had made their way to the truth of Magnotta, that expert psychiatric jargon didn’t defeat common sense or BS baffle brains and that we can all soon bid a short goodbye to the awful attention-seeking narcissist who killed the gentle Chinese student Jun Lin for no reason other than it kept his own name in the klieg lights of modern celebrity.

As Mr. Lin’s father, Diran Lin, put it Tuesday, his son was drawn to Canada, to Montreal, and after being here for 12 weeks, standing vigil over his boy at the trial, the father now understands all that will never be Jun Lin’s — from the wide-open spaces and fresh air to the chance to live as a free gay man, perhaps to walk down the street holding hands with a man he loved and even to marry. 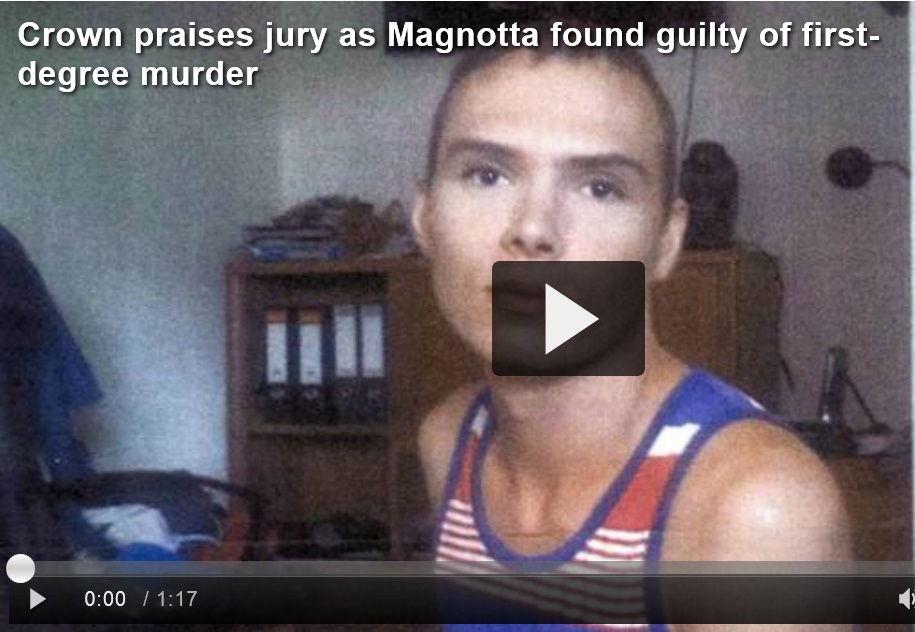 Jun Lin had such a man once, Feng Lin. They had broken up and Feng was out of the country by the time Jun was killed, but the two remained close friends.

Mr. Lin’s parents didn’t know he was gay, but once, when they were still a couple, Jun Lin introduced Feng to his mom and dad as a friend only, but he was so bursting proud of Feng he simply had to have them meet.

Such quiet pride in another was the very antithesis of Magnotta, who was driven by an unwavering need for attention and a reverence for self.

It’s probably even why he suddenly appeared, in the late spring of 2012, with a puppy, showing up at the apartment of a client with the little dog in tow.

By then, Magnotta was busy building online buzz for 1 Lunatic 1 Ice Pick (the video of Mr. Lin’s dismemberment, which he later posted to several gore sites), and actively planning the killing and thinking about the video. 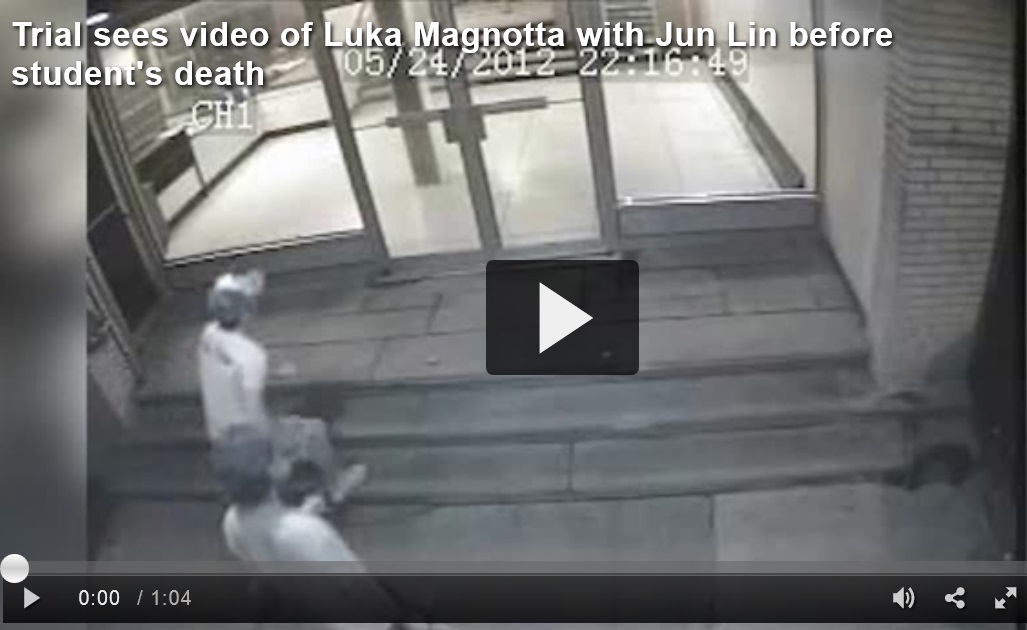 Four days later, on May 18-19, he shot video of himself hovering with a small electric saw in hand over the sleeping or unconscious body of another young man, never identified or located; this he used as the opening scene of 1 Lunatic 1 Ice Pick.

Six days later, on May 25, Magnotta killed Mr. Lin, shot the video of the dismemberment, and, for an added repellent touch, at one point placed the puppy at Mr. Lin’s torso.

Then, its purpose having been served, Magnotta killed the dog, and threw it in the garbage, just as he did with Mr. Lin.

The planet and all in it existed to serve him. People and animals were props and handmaidens to his reflection. Attention was his oxygen, his food, even his aphrodisiac. Though he was a rent boy, a hooker, though he sexualized even conversation, he wasn’t so much into sex (he needed Viagra even as a 20-something) as he was into how he looked during sex, how he was being admired.

To borrow the comedian Billy Crystal’s Fernando character, “It’s not how you feel, it’s how you look — and you look marvellous.”

Is Magnotta normal? Of course not. He’s one sick man. That doesn’t equate to craziness, in the legal sense or any other.

The best bet is that he has a personality disorder — narcissistic, histrionic, borderline or some fun mix of the three.

These are among the hardest of mental disorders in the world to treat, because they aren’t illnesses in the sense that illness imposes itself upon a healthy mind, but are rather hard-wired into the personality, as the name suggests. You are your personality, or, in Magnotta’s case, his personality disorder. The chances of mitigating it are grim. Psychiatrists say that a well-motivated borderline, for instance, may show some improvement after 10 years of intensive treatment.

His claim to suffering schizophrenia — it was a rushed if not careless diagnosis but was thereafter rubber-stamped by a succession of doctors and psychiatrists — simply didn’t square with his conduct. 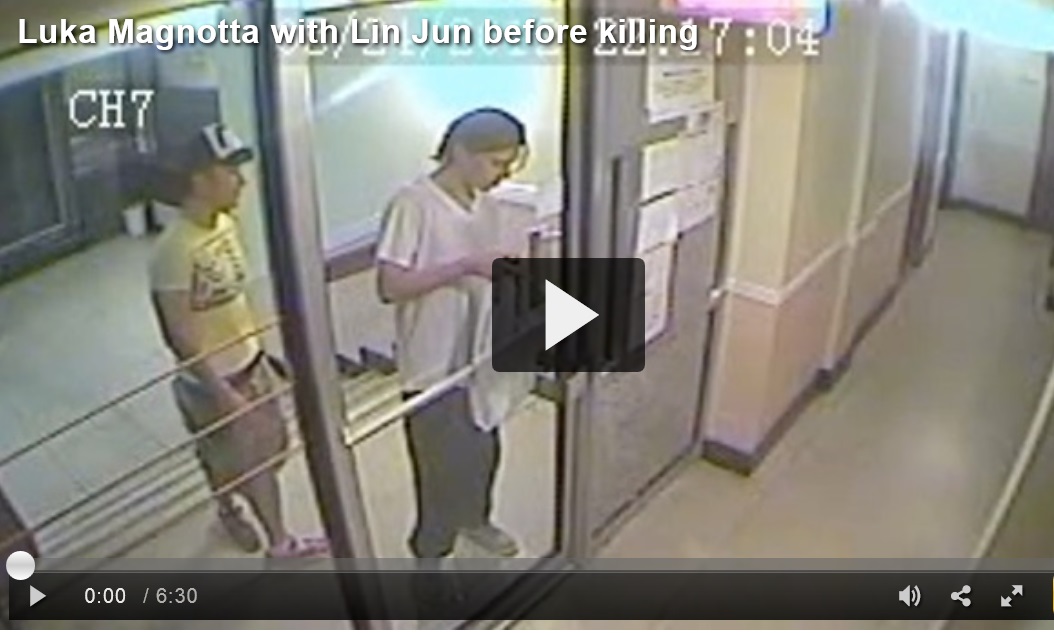 Two forensic psychiatrists testified for the defence that one can be even floridly psychotic and still appear normal, but the jurors saw Magnotta over the course of almost a month on the crystal-clear surveillance video that is such a feature of modern life.

They saw him a week before the killing enter his low-rent Montreal apartment building with that still-unidentified young man — and help the shaky fellow leave the next morning. They saw the product of that night too, the young man asleep or drugged on Magnotta’s bed, naked and bound at the ankles, Magnotta over him, saw in hand.

The following week, they saw Jun Lin and Magnotta enter the same building, and by 2:06 on the morning of May 25, they saw Magnotta wearing Mr. Lin’s distinctive Keith Haring T-shirt and ball cap, making the first of 16 trips to the basement garbage room.

They saw Magnotta mailing off Mr. Lin’s severed hands and feet — even demanding his money back when he mistakenly bought boxes that were too small — grabbing a cab to the airport, walking through it, landing in Paris, checking in at a hotel, waiting for a bus to Berlin.

All of it was on video, and throughout, Magnotta was self-possessed and completely rational, if, as ever, acutely aware of how he looked.

For a fellow who claimed to have killed Mr. Lin because he feared he was a “government agent” and government agents were after him, he cast not one glance over his shoulder, never appeared either anxious or worried. He was not deluded. He carried on ordinary conversations with cab drivers, hotel clerks and the man he hooked up with in Berlin. He set up new online accounts on gay hookup sites. 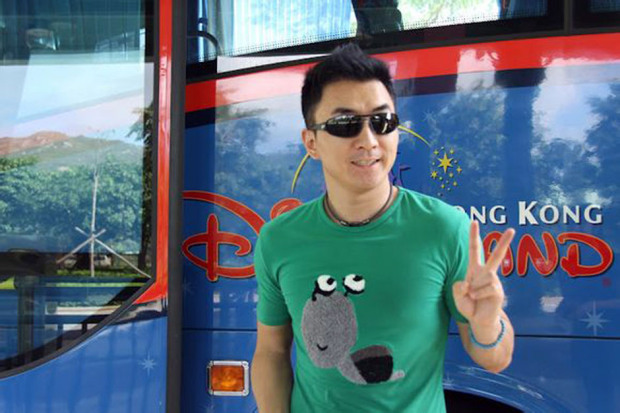 If his were the face of schizophrenia, those with it would be running the world, and they aren’t: It’s a terrible mental illness, one of the most serious. Magnotta’s father, who testified at the trial, genuinely suffers from it; with the big drugs he takes, he manages, if only barely.

Magnotta used his father’s illness, as he used everything else; he went to school on it, as they say in golf, and picked up the language, verbal and body, of schizophrenia.

He was never tested for malingering.

The tests, designed to ferret out those who exaggerate or fake the symptoms of mental illness, particularly on those for whom like Magnotta the gain may be huge, aren’t perfect, but some have proven reliable — the Structured Interview of Reported Symptoms (SIRS), the Minnesota Multiphasic Personality Inventory, Revised, the Miller Forensic Assessment of Symptoms Test or M-FAST.

And Magnotta flatly refused to be assessed by prosecution psychiatrist Dr. Gilles Chamberland — or anyone else the prosecution might have hired.

Justice Guy Cournoyer told the jurors in day-long instructions they couldn’t “consider this refusal as evidence Mr. Magnotta is guilty of the offences charged,” but they could use it to evaluate his defence.

Magnotta was hiding something, and he was hiding it in plain sight. Dr. Chamberland saw him clearly, and so did prosecutor Louis Bouthillier. And they helped 12 ordinary Montrealers see him too, and they deserve the thanks of a grateful, relieved, and safer nation.

Christie Blachford again brings us some valuable insight into the workings of a Jury Trial and in this article focusing on the mental health aspect.

It was interesting to read how Luka Magnotta was NOT appropriately assessed and reading between the lines, it appears that this was a decision of either his lawyer or Magnotta himself.

We can assume that Magnotta made the final decision after receiving legal advice and then we have to trust, that his legal advice was appropriate.

When those accused of horrendous crimes claim NCR due to mental illness, there is effectively an assumed reverse onus of proof.

If Magnotta was NCR, due to insanity, then why did he refuse to do that long list of tests starting with

Luke Magnotta was extremely lucky to get a trial. While the very worst criminals and murderers in Canada get a trial with legal aid there is a completely different attitude towards Justice in Ontario.

In Ontario, the Ontario Government routinely Fabricates Evidence to deny legal aid and or uses the most unbelievable justifications to terminate or fail to issue legal aid certificates in Child Protection and Criminal Matters.

On one side, the State of Ontario prosecutes on the behalf of Criminal Organizations like the Children's Aid Society and the various police forces of Ontario who habitually prosecute Male victims of domestic violence.

At the same time, they remove any and all legal aid that effectively decides the case as Judges in Ontario are chosen by the government to make Fas.cist Political decisions of Gender Superiority to promote Violence by women against fathers to cause him to call police when he then is arrested and never sees the children again.

In Ottawa recently a Mother, obviously borderline, with an incredible record of violence was exempted from doing the MMPI by Marguerite Lewis, a lawyer for the Children's Aid Society. The mother was only charged with threatening death and assault for some 55 assaults including assaults with a weapon causing bodily harm on just one day. The CAS were supplied with evidence of hundreds of days of assaults by that mother who also attempted on dozens of occassions to strangle the father.

The CAS exempted that mother because they knew she was a psychopath with an incredible addiction to violence and strangulation. She admitted assaulting children and partners including a new partner two days after she completed Anger Management with Ottawa's feminist Jewish Family Services. That assault was a stranglehold to the neck with her thumbs intertwined around his wind pipe, she coldly told him "My father was KGB, I know what I'm doing".

If you think Luka Magnotta, spare a thought for the Criminals in Power and Authority in Ontario, like Ottawa CAS lawyer Marguerite Lewis, Detective Peter Van Der Zander and Hired Pen David Alexander MacLean. These professional Child Abusers leave a trail of destroyed lives and promote terrorism and child abuse.

If you want to meet the worst criminals in Ontario, visit 464 Elgin Street and ask for the Evidence Fabricating Rotten Cop, Detective Peter Van Der Zander who Fabricates Evidence NOT to charge women who attempt to strangle to death vulnerable full time fathers.

This vile example of humanity is rumored to be about to be "anointed" as a Judge of the Ontario Superior Court" where she will spend the rest of her life abusing children with the typical anti-father hatred that is rampant in Ontario.