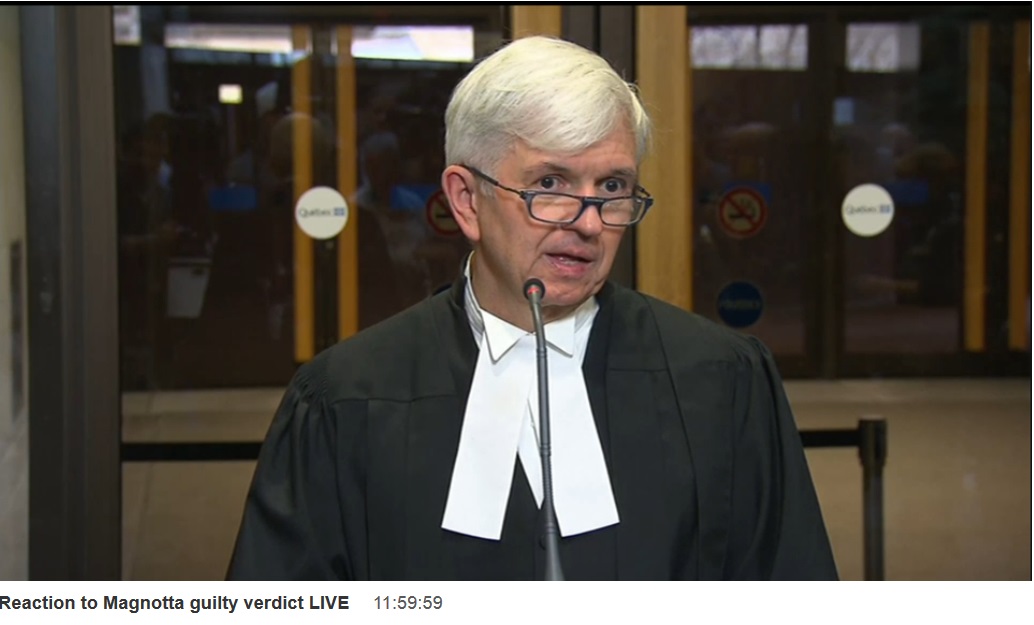 Luka Magnotta closed his eyes and showed no emotion after the jury foreman read the highly anticipated verdict in a Montreal courtroom, announcing that the eight women and four men deciding his fate had found him guilty on all charges.

On their eighth day of deliberations on Tuesday, the 12-person jury found Magnotta guilty of first-degree murder and committing an indignity to a body in the killing and dismemberment of Chinese engineering student Jun Lin in 2012.

A first-degree murder verdict carries an automatic life sentence with no possibility of parole for 25 years.

This marks the end of a lengthy and unusual trial that focused primarily on Magnotta’s psychiatric state at the time of the killing.

Magnotta, 32, a former Ontario resident, pleaded not guilty to the five charges, arguing he suffers from a mental illness, but he admitted to the physical acts of killing and dismembering Lin, and sending his body parts with menacing notes to political parties and schools.

The jury sat through 10 weeks of, at times graphic, testimony.Lin, 33, a Chinese national, was studying at Montreal’s Concordia University when he met Magnotta. According to what the accused told psychiatrists hired by the defence to assess him, Lin responded to an ad Magnotta posted on Craigslist, looking for kinky sex.

"Sir Winston Churchill would be proud," Cournoyer told them before they were dismissed.

Aside from the possibility of finding Magnotta not criminally responsible, the jury had been given several choices for a verdict:

Lin's father, Diran Lin, was in the courtroom as the verdict was read. The family's lawyer, Daniel Urbas, placed a reassuring hand on his leg as the jury prepared to announce its decision.

Lin's mother, who came to Montreal for a portion of the preliminary hearing, remained in China for the trial.

Through a translator, Lin's father delivered a heartbreaking victim impact statement, telling the court that it hurts him still to know that his last words to Jun Lin were “be careful son." 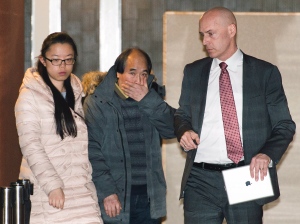 Crown prosecutor Louis Bouthillier was happy with the verdict.

“We had faith that the proof presented during the trial would be successful in convincing the jury,” he said outside the courtroom.

Bouthillier said he was expecting a lengthy deliberation, adding that the jury members had a lot of evidence and testimony to consider.

He said the jury did an outstanding job.

"Individually, the 12 jurors, they were really magnificent," he said.

Bouthillier said Magnotta's defence was a difficult argument to mount, particularly because Magnotta didn't testify and his lawyer bore the burden of proving his client was not criminally responsible through the testimony of experts. 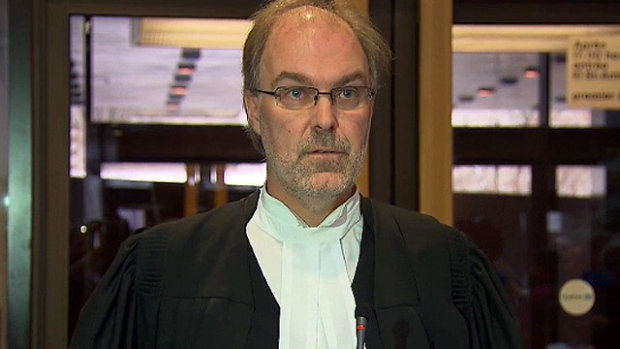 Crown prosecutor Louis Bouthillier said it would have been difficult for the jury to return a verdict of not criminally responsible because the accused did not testify in his own defence. (CBC)

Lin’s body parts were found in a suitcase outside Magnotta’s apartment, in packages sent to the headquarters of political parties and two Vancouver schools, and in a Montreal park.

After an international manhunt, Magnotta was arrested in June 2012 at an internet café in Berlin. A German police officer testified Magnotta was looking at an Interpol photo of himself before his arrest.

By the time his trial started more than two years later, Magnotta was barely recognizable. The once well-groomed, thin young man who flaunted his looks for modelling photos and a reality show audition had gained a significant amount of weight in custody.

On the day the trial opened, it took an unusual turn. Magnotta admitted to the acts detailed in the five charges, but pleaded not guilty.

During the 10 weeks of testimony, the jury saw a graphic video depicting parts of the crime, which was posted online shortly after Lin died, as well as additional footage found on Magnotta’s computer.

The jury also saw surveillance video of Lin walking into Magnotta’s apartment building the night he was killed and, in the hours that followed, plenty of images of Magnotta cleaning up and running errands, occasionally while wearing his victim’s clothes.

His lawyer spent the duration of the trial trying to convince the jury that his client was in a psychotic state when he killed Lin, unable to tell right from wrong, and therefore not criminally responsible.

The defence called Magnotta's father, a diagnosed paranoid schizophrenic, as its first witness. It also relied heavily on psychiatric reports and medical records to convince the jury Magnotta has suffered from schizophrenia since his late teens.

The Crown focused its case on surveillance footage and witness testimony that Bouthillier said proved Magnotta had planned the killing, and his well-organized escape from law enforcement, months in advance.

Bouthillier presented the jury with an email Magnotta sent to a British journalist in which Magnotta described the pleasures of killing and the need to continue – with a plan to produce a video depicting the death of a person. Six months later, Lin was dead and the graphic video was posted online.

Luka Magnotta got a fair trial, with a jury.

The same cannot be said for the process of Justice in Ontario where in Family Court, the Ontario Government acts manipulates and controls judicial decisions to fall in line with their views of Political correctness.

The Salem witch trials had more due process than occurs in Ontario especially in Ottawa.

Ontario Courts are now using what is called "Summary Judgment" to determine that there is no Genuine Issue for Trial which most of the time is entirely false.

The Corrupt Judges of Ontario simply rely upon other judges decisions which were based on fabricated evidence. When a motion for summary judgement occurs, Judges do not take any notice of Father's evidence.

The Fact that cor.rupt judges like Monique Metivier issues ex parte orders for custody without any hearing or notice of hearing, at the Request of corrupt lawyers like Tracey Engelking means Zilch.

Ontario Judges are chosen by Government Appointed judicial selectors who are guaranteed to provide the government with the least suitable candidates who are most like to abide by Facist the Ontario Government's Fas.cist Agenda of Gender Superiority that results in 99% of children being placed with mothers regardless of their history of violence towards children and fathers.

It's enough to make you want to vomit.