10 of the worst mass murders in Canada

The killing of eight people in Edmonton on Monday night is amongst the worst mass murders in Canadian history. 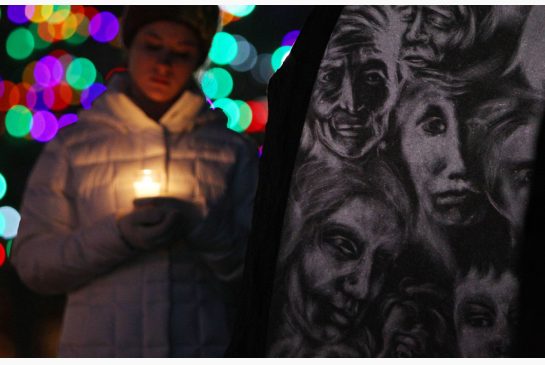 Breana Hooks stands next to the Women's Monument to mark the 25th anniversary of the Polytechnique massacre on Dec. 6, 2014 in London, Ont.. It was 25 years ago that a gunman shot and killed 14 women before taking his own life at the Ecole Poytechnique of the Universite de Montreal.

By: Sadiya Ansari Staff Reporter, Published on Tue Dec 30 2014
Eight people were found dead on Monday in Edmonton’s worst mass murder case, with police saying the suspect appeared to commit suicide in a small town north of the city.
This also appears to be one of the worst cases in Canadian history, which includes the Air India bombing, the devastating Ecole Polytechnique massacre 25 years ago and the Bandidos bikers executions in 2006.
Here are 10 of the worst cases of mass murder in Canada:
1. An Air India plane exploded hours after taking off from Vancouver killing all 329 people aboard in 1985.
2. Twenty-three people were killed after J. Albert Guay planted a dynamite bomb on a Canadian Pacific DC-3 in Quebec City on Sept. 9, 1949. His intended target was his wife. Guay and two accomplices were later hanged for the crime.
3. Fourteen women were killed by Marc Lepine at Montreal’s Ecole Polytechnique engineering school in December 1989. Lepine wounded another nine women and four men and fatally shot himself.
4. Thirteen people died after being herded into a storage room in Montreal’s Gargantua nightclub in 1975. Some were shot, but most suffocated when the building was set on fire in what was believed to be an underworld contract hit.
5. Nine people were gunned down by Mark Chahal, a spurned son-in-law in Vernon, B.C., who killed his estranged wife, her bride-to-be-sister and seven other relatives before killing himself in April 1996.
6. Nine people were slain in 1967 in Shell Lake, Sask., by Victor Hoffman, later sent to a mental institution.
7. Nine miners were killed by a deliberately set blast in Yellowknife’s Giant Mine in September 1992. Roger Warren, a striking miner, was sentenced to life in prison for setting the bomb during a bitter strike-lockout.
8. Eight people were killed in Edmonton on Dec. 30. Police said they found the suspect dead of apparent suicide early the next morning at a Vietnamese restaurant in Fort Saskatchewan.
9. Eight men connected to the Bandidos Motorcycle Club were killed execution-style and found dead on an Ontario farm in April 2006.
10. Seven people, including six children, killed in 1965 by ex-Vancouver police constable Leonard Hogue, who then killed himself.

With files from The Canadian Press

The Ontario Government has a Fas.cist Program of Gender Superiority that promotes domestic violence. Be it male or female, there is a general assumption that victims provoked the abuser or that they are responsible for the abuse because they failed to leave an abusive situation.

Ontario however applies a Gender Superiority Program that assumes Male Victims of Domestic Violence do not exist. Any male alleging domestic violence by a woman is deemed to be a heretic.

Police Officers like Det. Peter Van Der Zander of Ottawa actually Fabricate evidence NOT to charge women who attempt to murder their husbands.

Ottawa is a cess pool of authorities such as Police, Children's Aid, Judges who all join in a lynch mob to abuse the male victims of female violence.

It's got so bad that feminists openly promote murder of men as long as she claims, she is a victim of abuse.

Lawyers like Marguerite Lewis and Tracey Engelking commit offences against the administration of justice to assist violent women and to remove children from male victims of domestic violence.

Worst of all, judges, like Tim Minemma a former lawyer for the CAS, even fabricate evidence themselves to assist violent women.

Ottawa is riddled with the excrement of humanity who promote violence by women towards men. They are the Judiciary of Ottawa, composed of the vilest of the vile, former lawyers of the CAS anointed to the Judiciary by a fascist Ontario Judicial Selection process designed to select those most likely enforce Ontario's Fas.cist program of promotion of domestic violence by women towards men.