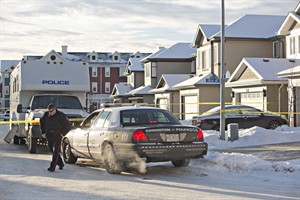 EDMONTON – Edmonton’s police chief says officers called to the scene of a mass murder will receive help if needed to cope with the tragedy.

Chief Rod Knecht says the deaths of six adults and two young children at the hands of a man with a lengthy criminal record are terrible for the entire city.

He says especially when there are children involved, such a crime can have a tremendous impact on officers.

Knecht says there is no suggestion of gang involvement and the motive for the slaughter appears to have been planned and deliberate domestic violence.

Cyndi Duong, 37, was fatally shot in a home in south Edmonton on Monday.

A few hours later, two men and three woman between the ages of 25 and 50, and a girl and a boy both under the age of 10, were found dead at a home in the northeast.

Investigators say the nine-millimetre handgun used in the killings was a registered weapon that had been stolen in Surrey, B.C., in 2006.

The killer was found dead by his own hand in a restaurant in the Edmonton bedroom community of Fort Saskatchewan yesterday morning.

Autopsies will be conducted Saturday.

In Ottawa, its the Ottawa Police who actively promote Murder and Domestic Violence.

ake Detective Peter Van Der Zander, a drop out recently promoted to $120,000 plus a year from his work for Fabricating Evidence to NOT charge one of Ottawa’s most violent females who attempted to murder her husband.

You see, the attending officers found the father with bruised, and bleeding from around the neck with scratch marks consistent with an
attempt to strangle the father which the father told police occurred by her pulling
his  head down by the hair to a couch where she placed her hands in a strangle
hold around his neck blocking off his airway.

Det. Peter Van Der Zander wrote a written report to Fabricate Evidence. He claimed she “denied pulling his hair or attempting to choke him. The Ottawa Police then obstructed justice by failing to provide the Video disclosure of that interview which obtained in another court in another matter showed that Det.

Peter Van Der Zander never asked her those questions. He suggested that
she might kill him with knife, sent her home in a victim services car, and
told her to be the first to call police next time.

The Ottawa Police are a Criminal Organization that operate a Fascist Program that promotes domestic violence towards fathers for the purpose of “Gender Cleansing” to remove children from full time fathers and place them with the most violent women who are encouraged to be violent by the Ottawa Police, the CAS and worst of all, the Judiciary of Ottawa who are selected by  Ontario’s Fascist Government for their willingness to promote the Ontario  Government’s Fascist Ideas of Gender Superiority.

Ottawa is a playground for Criminals, who have total immunity from criminal and or civil liability. The worst of the worst are the Evidence Fabricating Rotten Cops like
Detective Peter Van Der Zander and his superiors who turn a deliberate blind eye or who also fabricate evidence or commit further criminal
offences toprotect one of Ottawa’s most notorious Criminals. Detective Peter Van Der Zander.

An update to this Story.

Two days after the mother later obtained an Anger Management Certificate
from Ottawa’s notorious Feminist Institution, Jewish Family Services, she
assaulted her new male partner by placing a similar Strangle Hold around his neck
with her thumbs intertwined around his windpipe she coldly told him, “My father was
KGB, I know what I am doing”.

When that male reported that assault to the Ottawa Police they did
NOTHING.

When she learned of his report, she threatened him with false allegations
to the CAS to have his children removed. When he reported that intimidation to
the Ottawa Police they did NOTHING.

It was in Ottawa that a woman stabbed her sleeping husband in the chest with a butchers knife and claimed to be a victim of abuse.

It was in Ottawa that the Supreme Court of Canada gave its blessing to the hiring of a hitman to murder a father simply because the SCC decided that the RCMP got it all wrong and failed to consider her claims of being a victim of abuse, when there was no evidence to support that conclusion.

And so it goes on with a radical feminist promoter of murder by women against men, providing an illegal justification of being a victim of abuse, as active encouragement for women to murder their husbands.