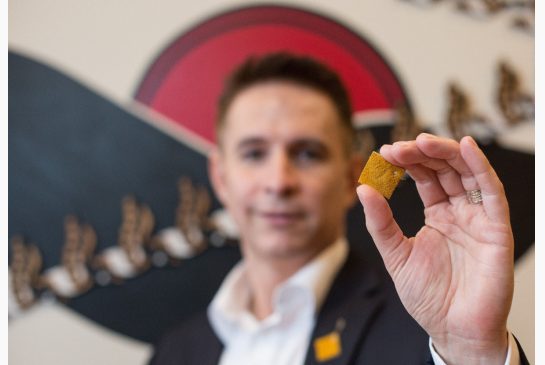 Paul Lacerte, executive director of the BC Association of Aboriginal Friendship Centres, wears a piece of moose hide representing the Moose Hide Campaign, an initiative signifying a commitment to end violence against women and girls in his community.

By: Joanna Smith Ottawa Bureau reporter, Published on Wed Dec 31 2014
OTTAWA—Paul Lacerte was out hunting moose with his teenage daughter along the infamous Highway of Tears in northern B.C. three years ago when he happened upon a simple, yet innovative idea that has become central to his work to end violence against aboriginal women and girls.
As he watched his daughter, Raven, skin the moose on their annual family hunting trip, Lacerte thought of how he had been one of only a handful of male participants at a national forum on violence against indigenous women in Vancouver that year.
“Women are bearing the burden of abuse, but they also have to bear the burden of advocacy to effect change, and this is a men’s problem as much as it is a women’s problem,” Lacerte, executive director of the B.C. Association of Aboriginal Friendship Centres, said from Victoria.
Inspired in part by the White Ribbon Campaign co-founded by former NDP leader Jack Layton, who had died that year, Lacerte decided to tan the moose hide, cut it up into little squares, punch a hole in the corner, pin it to his lapel on the left-hand side and then hand them out for other men to wear.
“People would ask: ‘What is that?’ and we’d say, ‘Thank you for asking. I’m speaking out against violence toward aboriginal women and children,’ ” Lacerte said, and a grassroots movement was born.
Since that day, the Moose Hide Campaign has distributed some 20,000 squares of moose hide nationwide, including at the B.C. legislature, where many MLAs this year wore it inside the House.
The goal is to reach 1 million within the next 10 years.
The RCMP estimated earlier this year that nearly 1,200 aboriginal women and girls have been murdered or gone missing in Canada in the past three decades.
With the Conservative government making it clear it will not support a national public inquiry on missing and murdered indigenous women, some organizations, such as those involved with the urban-based friendship centre movement, are focusing their efforts on prevention.
One of those people is Sylvia Maracle, executive director of the Ontario Federation of Indigenous Friendship Centres, which runs a program called Kizhaay Anishinaabe Niin (“I am a kind man”) to train men to be leaders and role models on this issue within their communities.
While Maracle is not against an inquiry, she wants it to go beyond data-gathering and emotional catharsis.
“I want to make sure that it results in an action plan, that provincial, territorial, federal and aboriginal governments commit to creating the kind of socio-economic change that will have to occur to really begin to address the roots of violence against aboriginal women and girls,” Maracle said.
That approach likely has a better chance of gaining traction with the Conservative government, which announced a $25-million “action plan” on violence against aboriginal women and girls last September.
Jeffrey Cyr, the executive director of the Ottawa-based National Association of Friendship Centres, said his organization will be receiving some support from that action plan as it expands a series of initiatives on ending violence against aboriginal women and girls — including the Moose Hide Campaign and Kizhaay Anishinaabe Niin — to the national level in the spring of 2015.
And since the rate of intimate partner violence against aboriginal women is more than twice that of other women, according to Statistics Canada, prevention means having difficult conversations about the fact ending violence against aboriginal women needs to involve ending violence by aboriginal men.
“A lot of the time, it’s going to start with internal reflection about what we see in our communities. Even if you’re not a perpetrator, standing passively by is equally as bad,” said Cyr.
It is widely acknowledged that much of that violence within the indigenous community in Canada is what is known as lateral violence, stemming from the intergenerational trauma of colonialism in general and the residential school system in particular.
“Our culture was always to protect our women, not to hurt them, so that shift in our behaviour came from the residential schools, and to take our power back means to stop behaving like that and to stand up and protect our women, like healthy warriors,” said Lacerte, whose father was a residential school survivor.
Lacerte believes the Moose Hide Campaign is a great way to spark a conversation about what can be an extremely sensitive subject.
“We have to have honest conversations in public now, or else this is going to continue,” said Lacerte, who managed to get everyone to wear the moose hide for a day in the B.C. legislature and wishes to see the same being done on Parliament Hill.
Cyr said the organic, icebreaking nature of the Moose Hide Campaign works to build bridges between aboriginal and non-aboriginal men as well.
“It’s a way of cracking an uncomfortable subject for people who aren’t necessarily steeped in it,” Cyr said.
Cyr recalled visiting Parliament Hill in September and being asked by a young male aide to a minister why he what the yellowish square on his lapel was supposed to mean.
The answer led to more questions: How widespread is the problem? How does it happen? What is the role of men and boys?
Cyr believes that short discussion will have an impact in other ways.
“When something crosses his desk ... He has an extra thought process that may go on, and that’s the change you’re seeking,” Cyr said.

Without questioning the motives of Paul Lacerte and with the greatest respect to his efforts there needs to be a Gender Neutral approach to Domestic violence.

This article is a classic example of the mind set that assumes, that only men are violent and that women are victims.

It's a politically correct approach that defies reality across Canada.

Domestic Violence is a learned behaviour. Its now a serious problem with children growing up to see mommy repeatedly beating up daddy and when he calls the police, the police take away their primary full time parent, their daddy and more often than not, the children end up being forced to live with a violent mother and not a female victim of domestic violence.

As someone who has spent a lot of time in various native communities, the violence against women is a far more obvious and plain to see.

When women are violent, most men are too afraid to make any call to police in fear of the normal knee jerk reaction to remove the male permanently from the lives of children.

That problem is now systemic across Canada and in places like Ottawa is now routine for Police to Fabricate Evidence NOT to charge violent women.

While Canadians may be outraged by the colonial and traumatic residential school method of "child protection" that same conceited arrogant belief that they are "The Power of God" continues to this day.

Native communities in particular are vulnerable to agressive evidence fabricating child protection workers with unlimited legal budgets and workers willing to habitually lie and fabricate evidence to get what they want.

Ontario courts in particular, give the "power of god" to CAS workers who have learned that they have absolutely no accountability and to this day, NOT a single Child Protection Worker or CAS lawyer has ever been charged with perjury, Fabrication of Evidence etc.

A classic example of such a despicable child abusing criminal is that of Ottawa CAS lawyer Marguerite Isobel Lewis, who personally fabricates evidence to allow a 100 Million Dollar Criminal organization to abuse children.

The CAS is full of lawyers who fabricate evidence and then get rewarded by being "anointed as judges" where they systematically ignore the evidence and rubber stamp what ever the CAS want.

In Ottawa one former Judge Monique Metivier corruptly granted exparte orders to cover up Obstruction of Justice by Marguerite Lewis. She "retired" to defeat a Judicial complaint that was coveniently delayed to a week after she conveniently retired.

They will be doing the world of child protection a great service if they "retire" or find some way of turning up their toes permanently.