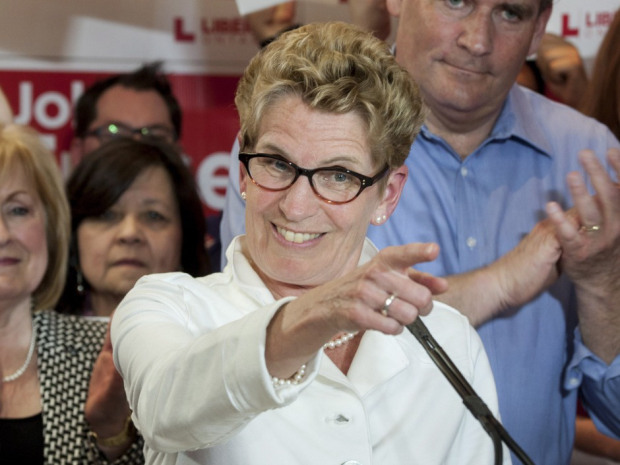 Last week, the Ontario Liberal Party said it would reimburse taxpayers for the $10,000 it paid a computer expert to allegedly wipe computer hard drives in the premier’s office. Sorry, the Liberals said. Our bad. Police are in the process of investigating the matter, and so the office of Premier Kathleen Wynne conceded that taxpayers probably shouldn’t get dinged for these seemingly nefarious expenses. And that’s absolutely correct; everyone knows that honest governments should foot the bills for their own alleged cover-ups.

The $10,000 from the government originally went to IT consultant Peter Faist, who is the spouse of former Ontario premier Dalton McGuinty’s deputy chief of staff. According to police, Faist was hired by David Livingston, McGuinty’s chief of staff, to delete information from approximately 20 government computers relating to the cancellation of two gas plants in Mississauga and Oakville, which cost the province upwards of $1.1-billion. Faist did not have security clearance to access the computers, nor did he have an actual contract for the work from what he told police. That said, according to the Liberals, no one thought Faist was doing anything wrong.

In a statement released last Monday, the Premier’s press secretary said that while the Ontario Liberal’s executive council did vote to cover the payment, it “is in no way intended as a prejudgment or comment upon the findings of the ongoing police investigation.” She added that until December 18, when an Ontario Provincial Police Information to Obtain document was released, the Liberals had no information that indicated that Faist’s services “related to the matters under investigation.”

Indeed, it was just business as usual at Queen’s Park; some guy — not actually a government employee, but a friend or family member of someone who is — was assigned a highly lucrative task that involved dealing with sensitive information. What? Why are you giving that look? Faist’s company had been previously employed by the province (with real contracts, and everything) for work totalling more than $50,000, but that also was nothing unusual. Indeed, in April, the Globe and Mail found that Liberal insiders and friends of senior political staff were awarded millions of dollars in contracts during the McGuinty administration. Faist’s $10,000 gig was just par for the course, and it was not rendered unsavoury until the police got involved. Only then did the Liberals decide that Ontario taxpayers were owed reimbursement.

The NDP said it is a “sad state of affairs” when it takes a police investigation for the Liberals to admit wrongdoing, and that it is. But monetarily speaking, this specific area under police investigation only represents 0.001% of the entire cost of the gas plant scandal. If the Liberals were to expand their criteria for taxpayer reimbursement to include funds spent toward blatant partisan pandering and egregious government waste (plus the fact that for years, the Liberals insisted the cost to cancel the two plants was around $230-million, several hundred million shy of the estimate from Ontario’s auditor general), the Ontario Liberal Party would have to put much more money back into public coffers — around $999.99-million, to be precise. And that’s just for the gas plants.

So, $10,000 down, only a billion-ish to go. That is, only if the threshold for repayment from the Liberals includes ill-governance, and not just police involvement. I think we already know the answer.

Kathleen Wynne is a rampant supporter of the Fas.cist ideal of Gender Superiority and you don't need to guess to hard as to which gender she believes is superior.

Wynne and the Liberals not to mention the NDP (which is even worse) have been long time supporters of Billions of Dollars of annual funding for Ontario's Criminal Cartel of unaccountable private corporations that have a monopoly on a contract for "Child protection" and when they litigate, they have their own former lawyers acting as judges, to rubber stamp anything and everything that they ask for.

In Ottawa, the next Judge to be is apparently one Marguerite Isobel Lewis, This lowest form of life fabricates evidence personally in the court room of "admissions" a classic dirty stunt, a Criminal offence against the administration of Justice called
"Obstruct Justice".

Kathleen Wynne does not give a Rat's rectum about Justice, about Children and what she does care about is Ontario's Fas.cist program that promotes Domestic Violence and murder against fathers.

IN Ottawa, Marguerite Lewis Fabricated evidence to support one of Ontario's most violent mothers who attempted to strangle to death the full time father of her children, to well, get rid of him.

After that same mother attended Ottawa's extreme feminist institution called Jewish Family Services, obtained a certificate, and the next day, assaulted her new male partner by placing her hands around his neck with her thumbs intertwined around his neck, in a Stranglehold saying "My father was KGB, I know what I am doing".

The Ottawa and the CAS both did NOTHING. When the mother learned her second victim had reported the assault, she threatened that she would more false allegations and have his children removed from him.

When that was reported to the Ottawa Police and the CAS they both did nothing. You see, Marguerite Lewis, the CAS lawyer had already fabricated so much evidence and obstructed so much justice, that she could never admit to but, still refused to make any denial of those allegations which, means, she showed consciousness of guilt, which is enough to find a conviction in most criminal trials.

But, don't expect any action from the Ottawa Police or any judge in Ontario as its all part of Ontario's Gender Superiority Program that promotes murder and domestic violence against fathers.