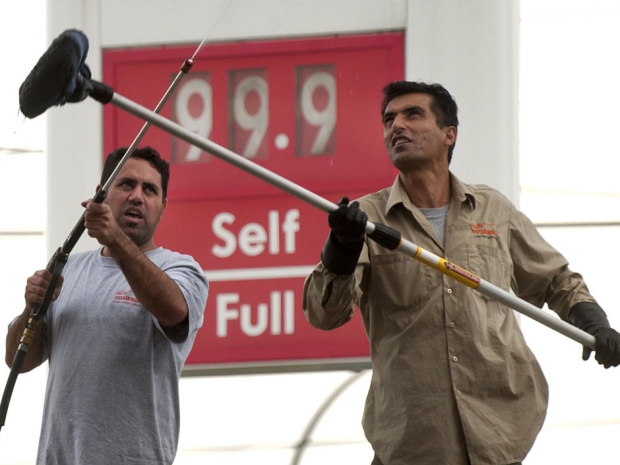 The 46 per cent price plunge last year of oil, Canada’s biggest export, may trigger tectonic shifts in the economy.

For more than four years, one constant of Canada’s economy has been the central bank’s 1% overnight interest rate. The Ottawa-based bank hasn’t changed the rate, which influences everything from car loans to mortgages, since September 2010, the longest pause since the Second World War, as it tries to guide the country back to full capacity.

Here’s a list of nine other noteworthy numbers from the year just ended that will shed light on where the world’s 11th largest economy is headed in 2015. 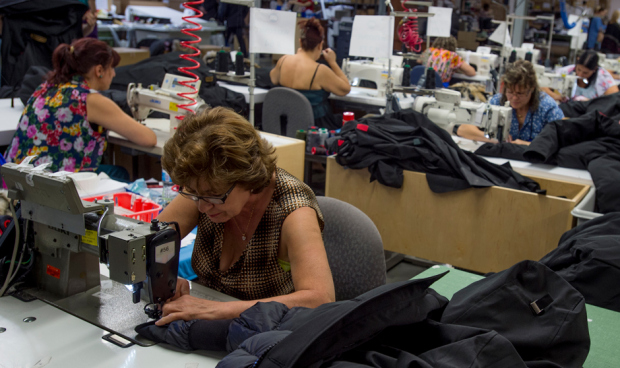 Women work on sewing machines during a tour of the new Canada Goose factory in Toronto.

The number of Canadian factory workers in June, the fewest since at least 1976. The decline — a legacy of how the Canadian dollar’s surge to a record $1.10 in 2007 hampered the ability of manufacturers to compete globally — underscores how factories have borne the brunt of the shrinking export market and remain the economy’s Achilles heel.

Now that demand is picking up, some argue the industry lacks the capacity to produce what the world wants without major new investments. A central bank study last month showed some manufacturers are expanding output abroad rather than boosting production at home.

There has been a pickup in hiring. Since June, the country has added more than 41,000 factory jobs through November, with the statistics agency to report December data on Jan. 9. Yet Bank of Canada Governor Stephen Poloz says the loss of so much exporting potential has damaged the “backbone of the economy” and the country must “go through a longer rebuilding phase.”

Canadian Prime Minister Stephen Harper and European Commission President Jose Manuel Barroso: One of Mr. Harper's major 2014 accomplishments was completing the text of a deal with the European Union, followed by the signing of an agreement with South Korea.

The combined gross domestic product of countries with which Canada has now concluded free trade agreements, representing more than half of the global economy, and perhaps the answer for the country’s beleaguered manufacturers. Among Prime Minister Stephen Harper’s major 2014 accomplishments was completing the text of a deal with the European Union, followed by the signing of an agreement with South Korea.

With an election slated for October, Harper’s attention turns to talks with Japan, India and the Trans-Pacific Partnership group of 12 countries.

His agenda seeks to reverse Canada’s shrinking presence in global trade: the country’s share of world exports has dropped to about 2.5% from 4.5% 15 years ago. To opposition lawmakers, the decline is proof of Harper’s failure to create new markets for the nation’s exports, even if he’s good at signing deals.

Many observers believe the market is still headed for a correction. The central bank said in December Canadian house prices were as much as 30% overvalued.

The average sales price of a detached home in Vancouver, a record reached in February. Through November of this year, average prices are up 6.8% nationwide from the same month a year earlier, putting 2014 on pace to be even hotter than 2013, which saw prices increase 5.2%.

Low borrowing costs are driving real estate gains, along with a scarcity of single-family homes in markets such as Toronto. The strength of the market has surprised even the most optimistic forecasters, prompting Bank of Montreal’s Chief Economist Doug Porter to list real estate as one of his top five surprises of 2014.

Many observers believe the market is still headed for a correction. The central bank said in December Canadian house prices were as much as 30% overvalued. 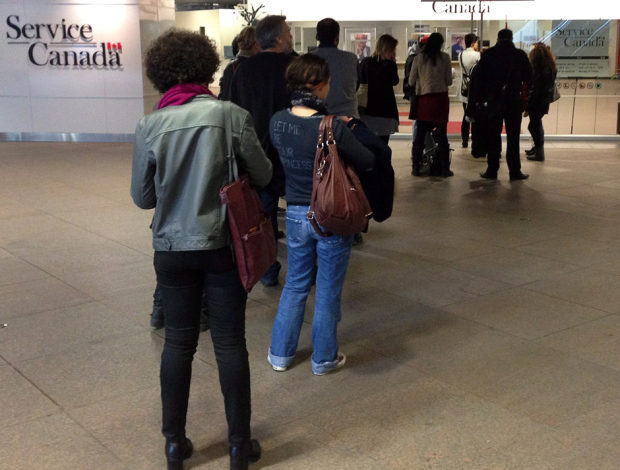 Bank of Canada is keeping rates on hold because of “material slack” in the labor market, even with a jobless rate near a six-year low of 6.6 per cent. 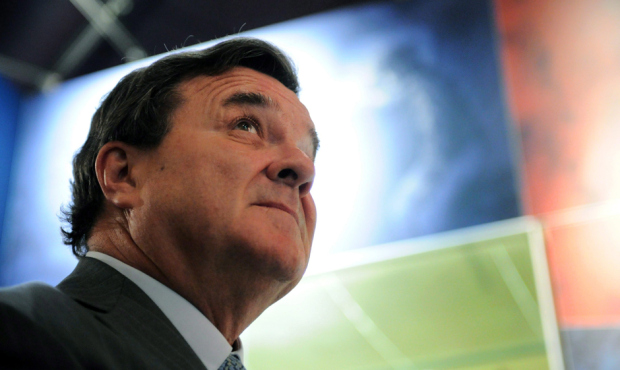 The number of days Jim Flaherty spent as Canada’s finance minister before stepping down March 18. Flaherty built his longevity on cuts that shrank federal tax revenue as a share of GDP to the lowest since before the Second World War, helping keep the economy afloat and his government in power after the 2008 financial crisis.

While his tenure ended amid policy clashes with his own government, Flaherty’s record was one of success: Canada’s economy outperformed the Group of Seven average in all but one of the years he held office. He resigned as Canada’s third-longest serving finance minister.

Flaherty died at age 64 — the CBC reported of a heart attack — less than a month after stepping down. His successor Joe Oliver, a former investment banker, now has the task of fulfilling Flaherty’s pledge to return the government to surplus this year. 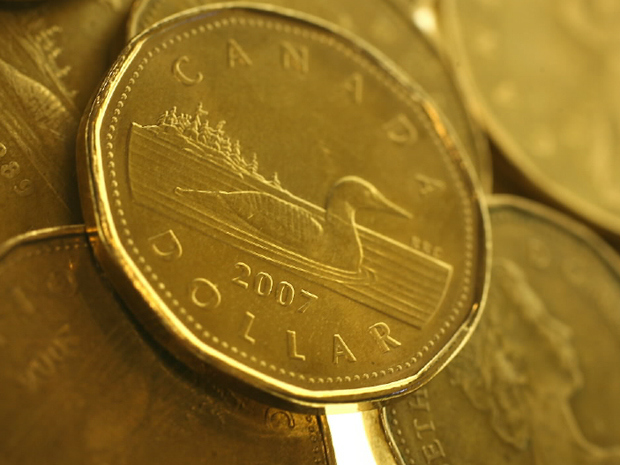 The lower dollar should help regions such as Ontario that rely more on manufacturing.

The amount in U.S. cents one Canadian dollar purchased at year-end. After touching a 2014 intraday high of 94.44 cents on Jan. 2, the nation’s currency went into a tailspin as investors began to grasp the Bank of Canada’s Poloz was less inclined to raise interest rates than his predecessor Mark Carney, and as global commodity prices began to sink. The lower dollar should help regions such as Ontario that rely more on manufacturing. On the flip side, it raises the cost of imported goods and foreign travel and is part of the reason consumer confidence ended 2014 at the lowest in 18 months. 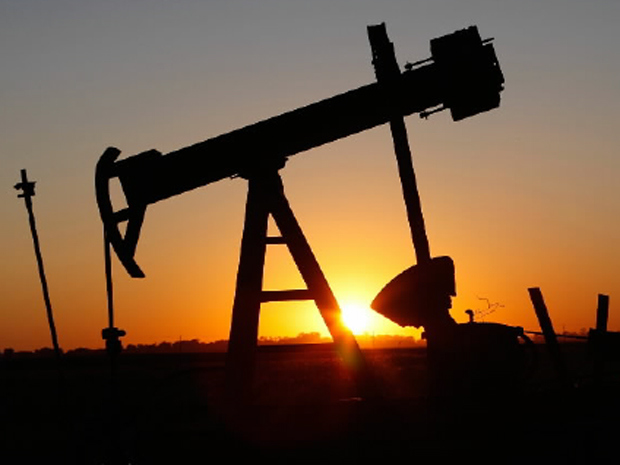 The 2014 closing price of a barrel of West Texas Intermediate crude oil. The 46% price plunge last year of Canada’s biggest export may trigger tectonic shifts in the economy. Producers are already scaling back investments. Oliver trimmed the government’s revenue outlook in November to account for the drop, and cut cumulative surplus projections by almost half. His adjustments assume WTI will trade at about $81 a barrel. If oil doesn’t recover soon, he’ll have even less flexibility when he delivers his pre-election budget in the next few months.

The percentage of support Quebec’s Parti Quebecois received in April provincial elections, the lowest in 44 years. Polls predicted the separatist party would win a legislative majority in the French-speaking province. Instead, the defeat removes — at least for now — the prospect of another independence referendum, an issue that previously roiled credit markets and still has the potential to undermine investment.

Foreign acquisitions announced in 2014 totaled $69.6 billion, more than double the 2013 total, according to data compiled by Bloomberg. Among the 2014 deals was Repsol SA’s $13 billion purchase, including debt, of Talisman Energy, and of AltaLink by a unit of Warren Buffett’s Berkshire Hathaway Inc.

The Tim Hortons acquisition involved a so-called inversion, in which a U.S. firm moves its legal domicile to a lower-tax country — a practice that the U.S. Treasury Department is now seeking to discourage.

With assistance from Greg Quinn in Ottawa.
Bloomberg.com

Ontario spends many Billions of Dollars on promoting Crime and destroying Society.
The primary weapon is the Unaccountable Criminal Cartel of Children's Aid Societies of Ontario that is Ontario's "Ges.tapo".

The Gestapo is the name that lawyers habitually use to describe this collection of professional criminals who fabricate evidence with impunity and immunity.

Despite almost daily examples of Fabrication of Evidence, NOT a single CAS worker has ever been charged Criminally.

Recently the Ottawa Police investigated Fabrication of Evidence by Marguerite Lewis, a lawyer for the Notoriously Co.rr.upt Children's Aid Society of Ottawa.

Marguerite Lewis personally fabricated evidence to remove a child from a full time father to illegally NOT return the child to a male victim of domestic violence.

She was emboldened to make that decisions because most of the Judges hearing cas matters are former CAS lawyers like the Dishonorable Timothy Minnema who personally fabricates evidence as a judge to remove children from Fathers when CAS and police investigations just found that they had no protection concerns regarding the father.

That investigation came to a halt when a call occurred with CAS lawyer Tracey Engelking who later obtained an EXPARTE Order from another Co.rr.upt Judge
Monique Metivier who promptly "retired" to avoid an investigation by the Judicial Council.

Justice Timothy Minnema is a classic example of an Ontario Father Hating CAS loving judge with as much empathy and compassion as Pirhana that's been dead for a few days.

He should do the world a favour and "retire" or find some other way of turning up his judicial toes.

Its the vile underbelly of society's lawyers and Judges, former CAS lawyers who bring Ontario administration of justice into ill-repute and who cost Ontario Billions of Dollars that should be spent on promoting family values rather than a Fas.cist program of Gender Superiority that results in "Gender Cleansing" with 99% of all custody cases in Ontario being given to mothers even when they are the most violent mothers who assault and abuse children not to mention serial partner abusers.

It's time for an overhaul of Ontario Justice and it can start with the Scraping of Ontario's CAS and replaced with a Government Department of Child Protection.