With social conservatism seemingly spent as a political force, its adherents forced to rethink their strategy 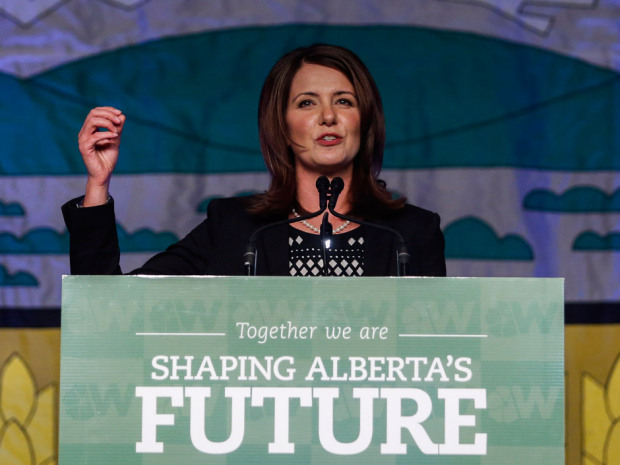 Former Wildrose leader Danielle Smith at the party's annual meeting in November. She said when she tried to “press the Wildrose to become more mainstream ... it seems the more reaction I got in the opposite direction.”

CALGARY — Her party reduced to a rump of five, former Wildrose opposition leader Danielle Smith gave one justification for her historic defection to Alberta’s ruling Progressive Conservatives that stood out above the others.

She pointed to a motion at a recent general meeting to recognize the rights of Albertans regardless of sexual orientation. It was defeated by a group who, allegedly, wanted to teach Ms. Smith “a lesson for walking in the Gay Pride parade,” she says. “Unfortunately, as I’ve been trying to press the Wildrose to become more mainstream, the more I pressed on that it seems the more reaction I got in the opposite direction.”

Certainly Wildrose had been trying to shed its image as a socially conservative party since a devastating 2012 election loss when its leaders realized that even in Alberta, voters live in the centre of the political spectrum.

Indeed social conservatism as a political force appears to be spent. From the federal Liberals’ push to decriminalize marijuana, to MPs’ support for doctor-assisted suicide, to Ontario’s stand against the federal Conservatives’ new prostitution law, politicians have figured out that many Canadians are no longer on the fence on some of these social issues.

And as long as that’s the case, no political party, conservative or otherwise, is going to risk alienating voters to champion highly divisive, morally contentious pet issues. Even belief in Stephen Harper’s “secret agenda” has waned in the years since he won a majority.

“A whole pile of social conservatives in early 2000 secretly hoped that there was that secret agenda,” says Ray Pennings, the executive vice-president of conservative think-tank Cardus. “As that unfolded over the years, they realized more and more that is simply not in the cards and unlikely to happen.”

But while Red Tories and Liberals may rejoice at the idea of social conservatives’ withdrawal from politics, they are not disappearing, just rethinking their strategy. Activists now understand that it’s the culture that has to change before social conservatives can hope to see their key moral tenets enshrined in law. And some are even questioning the wisdom of that tack: maybe some of these issues are best kept out of the hands of government and returned to the realm of personal responsibility after all.

“Social conservatives are generally pretty dissatisfied with the way that things have fallen out federally,” says Robert Joustra, an assistant professor of politics at Redeemer University College in Ancaster, Ont. “They have nowhere left to go. The Liberal party has obviously gone out of their way to make certain traditional social conservative issues taboo and beyond discussion.”

Take same sex marriage: only 10 years ago, the issue was still contentious. A 2012 Ipsos Reid poll shows a dramatic, rapid shift in public opinion. It found that 62% supported the idea that same-sex unions should be equal to heterosexual marriages. Less than 18% of respondents thought it was “wrong and should never be lawful.”

Mr. Pennings points to this shift as pivotal for social conservatives.

“Until 2004, there was an open debate on that issue,” he says. But once the Civil Marriages Act was passed, opposition became culturally marginalized. And now, with the rulings against allowing religious school Trinity Western to grant law degrees because of its position against homosexuality, he says, “we’ve moved beyond marginalization to silencing and taking legal steps to say that’s an illegitimate point of view that deserves to be condemned along with racism as bigotry.”

The goal posts have similarly shifted on abortion. In November, within weeks of becoming New Brunswick’s new Liberal Premier, Brian Gallant announced the province would lift regulations requiring women to seek the approval of two doctors before proceeding with an abortion, one of the most restrictive laws in the country.

While a majority of Canadians would support some kind of legal limit on abortion — the procedure has been in a kind of legislative limbo since the Supreme Court of Canada struck down the law in 1988 — the Conservative government won’t touch the issue.

Under Mr. Harper, the Conservatives have quashed every bid by backbenchers to see the issue raised, including killing B.C. MP Mark Warawa’s attempt to bring sex-selective abortions to a vote in the Commons.

Across the aisle, too, there is no debate. Liberal leader Justin Trudeau has declared he will not approve the nomination papers of candidates who would not vote in line with the party’s pro-choice position.

Even among committed pro-life activists, a tacit understanding is emerging that an all-out abortion ban is no longer on the public radar. 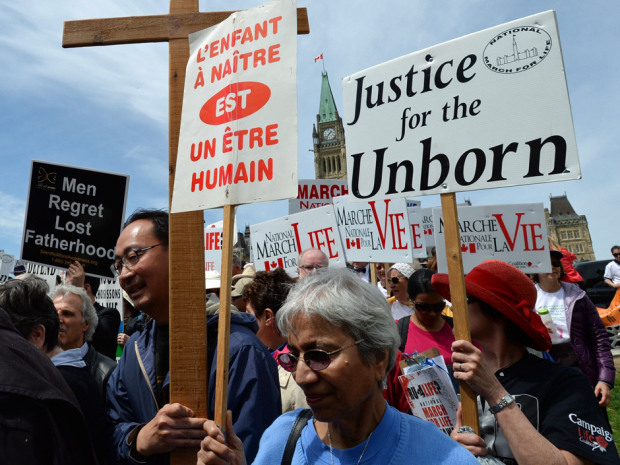 People take part in the "March For Life" on Parliament Hill in Ottawa on May 8, 2014

Andre Schutten, a lawyer for the Association for Reformed Political Action (ARPA), which has intervened in several high-profile Supreme Court cases, thinks there’s still ground to be gained by virtue of the absence of law on the subject.

“It used to be that the political arm of [the pro-life] movement was all or nothing. It was very idealistic. And in the last five years, there’s been a huge shift,” says Mr. Schutten. “Politics is the art of the possible and realizing that, we have a lot of things we need to change, and culture is a huge one that needs to change first before we can change the laws in any meaningful ways.”

Change that politicians can sell: Mr. Pennings thinks people don’t believe that political parties are anything more than marketing machines. “It’s about brand, it’s not about substance.”

That disillusionment brings social conservatives back to culture.

“I think there is a reorientation about how to engage,” Mr. Schutten says. “We have to find ways of making arguments and living within the pluralism of Canadian society.”

Social conservatives are generally pretty dissatisfied with the way that things have fallen out federally. They have nowhere left to go

The Manning Centre, Preston Manning’s school for aspiring right-wing politicians, conducts annual polls on conservative attitudes of Canadians. It consistently finds that respondents are a fairly centrist-right bunch who prioritize the economy and health care. And social conservatives generally believe they have demographics on their side as they tend to have more children.

“One of the things that struck me about that data that was so interesting is that the attitudes of Canadians generally are more socially conservative, but they’re less and less willing to see those attitudes reflected in policy,” says Mr. Joustra.

“The culture wars so burned out political channels on this that social conservatives have spun off into psychographic clusters and ghettoized themselves.” 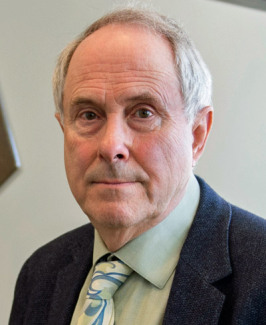 In other words, they’ve retreated to the churches, charities and other civil institutions where they hope to shift the culture from within.

It also means all that pent-up activism will be spent raising awareness on social issues, whether through protesting on campus or stuffing mailboxes with pictures of aborted fetuses. And groups like ARPA will work with political parties from across the spectrum to make small gains — such as supporting the NDP on palliative-care initiatives.

Tom Flanagan, a political scientist and past adviser to Mr. Harper and 2012 campaign manager for the Wildrose party, points out that social conservatives have scored a few subtle wins under the Harper government.

The media define the movement almost solely as one on abortion and gay rights and, Mr. Flanagan says, that’s allowed some policy points to pass under the radar.

Tougher sentencing legislation, for example, is a classic social conservative bugbear that has gained broad-based support. So did changes to the tax code that incentivize marriage and children, such as the child tax credit and income splitting.

“It’s wrong to say social conservatism is dead. I think the goal posts have moved and social conservatives have been forced to give up the field on some issues on which they used to fight. Still, some diehards are fighting there, but I don’t think they’re going to have a lot of impact,” he says.

“I think these are the wrong battles for Conservatives, frankly. You can live with legalization [of abortion, same-sex marriage or marijuana, for example] or the absence of criminal prohibition, but that means you regard these as important moral issues that you want to deal with through education and your own personal conduct and social standards, rather than prohibition,” he says.

Shifting the focus to positive rights, by allowing for religious education, for example, or by advocating for palliative care for vulnerable and senior Canadians rather than protesting against euthanasia, as the ARPA has done, is where social conservatives stand to make their gains.

“We can’t look to politics to be the saviour of our culture or country because there are many spheres of responsibility that exist, like family, like churches, like the marketplace, and like ourselves,” says Mr. Schutten. “Let’s strive for better laws and better public policy, but that has to be done in connection with better preaching at the pulpits, better families, husbands that love their wives and kids.

“These various spheres and institutions in society will have to work for total cultural change and progression.”

Notice there is virtually no mention of Gender Equality? Nor is there any mention of Canada's war on Father's, its descrimination against fathers?
Its systematical removal of legal rights for those born male?

Then there is the lack of a Legal Presumption of equal parenting, or even a Legal presumption of Gender Equal Rights?