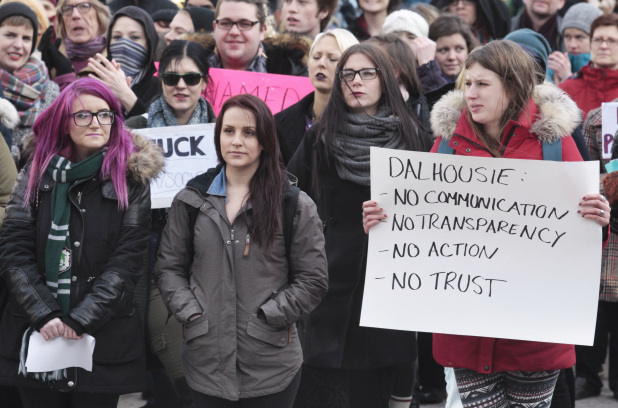 Students attend a rally at Dalhousie University on Jan. 5, 2015, calling for tougher penalties against those involved in the dentistry Facebook scandal.

On Monday, university president Richard Florizone and the dean of the faculty of dentistry, Thomas Boran, announced the suspension, which was originally made on Dec. 22.

“Comments expressed on the Facebook postings were deeply offensive and completely unacceptable to all of us at Dalhousie,” Florizone told reporters during a press conference Monday.

He explained the decision to suspend the students from clinical activities was made due to concerns over their obvious lack of professionalism.

Boran said the students will not be able to graduate until their clinical requirements are fulfilled.

Florizone said an academic standards committee is currently working to determine the length of the suspension, and if expulsion is required.

The restorative justice process will remain ongoing, he added.

In the meantime, Florizone explained, it’s yet to be determined if the students will be allowed to attend regular classes, which are set to resume Jan. 12.

A committee will be consulting with students and dentistry faculty members, and segregating the 13 men in private classes is an option, Boran said.

The university received knowledge that some of the men involved were threatening self-harm, and Florizone said they waited to announce the suspension to ensure proper supports were in place.

Over the weekend, four university professors went public with a decision to file a formal complaint to the school on Dec. 21 after hearing from students who felt Dalhousie’s actions weren’t strong enough.

A protest calling for tougher action took place on Monday on university grounds, with many saying an expulsion – not a suspension – should be the students punishment.

Florizone has said 13 men in the fourth-year of the dentistry program were members of a Facebook group where the controversial comments were posted. The Facebook page has since been taken down.

According to CBC, members of the Class of DDS Gentlemen page on Facebook voted on which woman they’d like to have “hate” sex with and joked about using chloroform on women.

In another post, a woman is shown in a bikini with a caption that says, “Bang until stress is relieved or unconscious (girl).”

Choosing to listen to the Victims is only permitted based on Gender Superiority.

Example, these repugnant male students, brought disrespect and dishonour to all males however, the raging extreme feminists want their guts for garters.

In Ottawa, the Ottawa Police will NOT charge the most violent of mothers, even if they are medical professions, who abuse children and partners.

The Ottawa police apply a Gender Superiority Program, that uses "justifications" as to why NOT to charge the Most Violent of mothers who habitually assault their children and partners.

One classic is to "blame the victim" that is, "he must have provoked her" despite incredible quantities of evidence that she in fact spent years habitually assaulting the children and partners to provoke a response from them.

Then there is the well known Child Abuse Detective of the Ottawa Police who goes to conferences with the CAS and develops total amnesia of what was discussed only that he called the child victim on the phone and asked the victim is the victim wanted to press charges against the victim's mother who was given care and control of the child after a Det. Peter Van Der Zander Fabricated evidence to NOT charge her.

Our Society has become fascist in nature and applies a Gender lens to the Rule of Law which literally and practically deprives fathers, and in particular, male victims of female violence of all their legal rights.


Commentary by the Ottawa Mens Centre

Just imagine that one of these Female Graduates of Dentistry was, behind closed doors, extremely violent, and habitually assaulted her own children and went on to be a serially violent to male partners.

If her male victim called the police, take one guess at what the Ottawa Police would do.

You guessed it, she would end up with a typical Detective that is part of a $400 Million dollar expense largely devoted to promoting violence by women towards men.

That typical detective is represented in Ottawa by a professional child abuser, a professional Fabricator of Evidence like Detective Peter Van Der Zander, who with the empathy and compassion of a dead piranha  fabricates evidence to suit the statistics that are promoted by the Ottawa Police as a Justification for their Direct and Indirect costs to Taxpayers that costs Billions more than the official budget of an incredible 400 Million Dollars.

The Ottawa Police prosecute around 90% males of which most are victims of domestic violence.

The primary purpose of those corrupt criminal charges is to create "statistics", to support their demands for funding.

That's right, its a Billion Dollar corrupt work project that effectively steals money from Tax Payers for the Police to engage in serious crimes against the administration of Justice.

How do they get away with it?

Well, a very large number of judges come from Ontario's Billion Dollar Criminal Cartel of unaccountable Children's Aid Society where Fabrication of Evidence and promotion of violence by women towards children and partners is the primary objective.

These lawyers turned judges like Timothy Minnema, go on to Rubber Stamp CAS requests and to knowingly allow lawyers like Marguerite Lewis to Fabricate evidence before them and do nothing.

Why would a judge be a criminal? Well, Timothy Minnema was never psychologically assessed for personality disorders before he became a judge.

Most get to be judges because of their incredible ability to brown nose, a polite way of demonstrating supreme loyalty as did Hitlers Judges.

Now however their agenda is even more fascist, Its one of Gender Superiority, of supporting the Government's favorite causes, the rich, the influential and to hell with law and to hell with justice.

Timothy Minnema can do the world a favour and take the face saving solution of "Retiring".

That's exactly what another Corrupt Judge , the Dishonourable Monique Metivier did when a complaint about her landed at the Judicial council.

You see, she granted an Ex Parte Order to the CAS Ottawa who illegally kept a child and then a lawyer Marguerite Lewis fabricated evidence before, you guessed it, Tim Minnema to give custody to one of Ontario's most violent child abusers.

Our Ottawa Judiciary see things through a gender lens, that effectively criminalizes males from birth, and promotes murder and violence by women towards men.

Our justice system is for the Corrupt, the Rich, the Authorities to terrorize and torture those that are by accident of birth, born with testicles.

Just imagine that one of these Female Graduates of Dentistry was, behind
closed doors, extremely violent, and habitually assaulted her own children and
went on to be a serially violent to male partners.

If this psychopath's male victim called the police, take one guess at what the Ottawa
Police would do.

You guessed it, the female psychopath would end up with a typical Detective that is part of a $400 Million dollar expense largely devoted to promoting violence by women
towards men.

That typical detective is represented in Ottawa by Detective Peter Van Der
Zander, who with the empathy and compassion of a dead piranha fabricates
evidence to suit the statistics that are promoted by the Ottawa Police as a
Justification for their Direct and Indirect costs to Taxpayers that costs
Billions more than the official budget of an incredible 400 Million Dollars.

The Ottawa Police prosecute around 90% males of which most are victims of
domestic violence.

After Det. Peter Van Der Zander was removed from that case, another Ottawa Detective charged that female psychopath with threatening death and assault for some 55 assaults in just one day after, having the charges screened and reviewed by an Ottawa Crown Attorney, following a six month investigation that was largely fighting delays by the Ottawa Police who knew of the embarrassment it would cause.

That's where the Fac.sist Ontario Government's doctrine of Gender Superiority steps in. The Violent Mother's Aid Society contacted the lead Crown Attorney who days after the charges were laid, "Stayed the charges".

The Mother's Aid Society aka the CAS, then went to Corrupt Ottawa Judge Monique Metivier and obtained with a hearing, an order for custody of the children for the mother just after her new male partner reported that she had just assaulted him, by placing both hands around his neck with her thumbs expertly intertwined around his windpipe while coldly telling him "My Father was KGB, I now what I am doing".

The Ottawa Police refused to investigate that report which emboldened the psychopath female to threaten that she would make false allegations to "the Violent Mother's Aid Society" to have his children removed from him.

When he reported that to the Ottawa Police they did nothing.

The psychopath then refused to do psychological testing even though they acknowledged she had repeatedly assaulted the children for no apparent reason.

While that was going on, the Violent Mother's Aid Society requested that the Ottawa Police lay trumped up charges against the male victim on evidence they knew was fabricated.

Ottawa is the Nation's Capital, and its the worlds Capital of a Fas.cist program of Gender Superiority that promotes murder and violence by women towards children and fathers.

Local Ottawa Lawyers have their own name for the Children's Aid Society of Ottawa, They call them "The Gestapo". If you read Mein Kampf, it reads like a practical operations manual for the child protection workers and lawyers of the CAS not to mention, the Ottawa Police who by no coincidence, also wear Black Shirts.