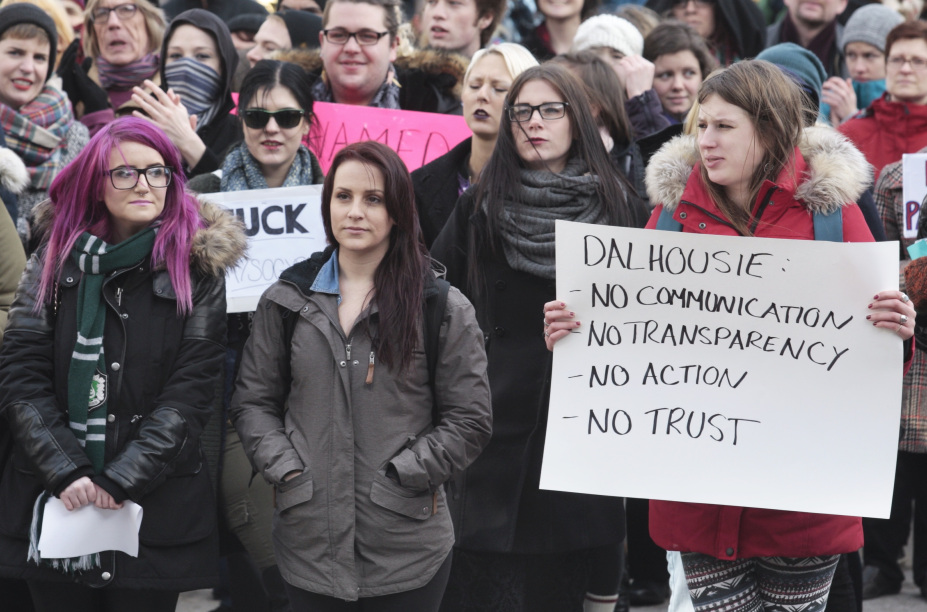 Students attend a rally at Dalhousie University on Jan. 5, 2015, calling for tougher penalties against those involved in the dentistry Facebook scandal.

Ontario’s licensing agency for dentists has asked Dalhousie University for the identities of 13 students involved in making violent, anti-female comments on the Internet.

So far there hasn’t been a response to the regulator’s Dec. 31 letter, said Irwin Fefergrad, registrar of Royal College of Dental Surgeons of Ontario.

If the university doesn’t provide a full list of names, then all students graduating this year from Dalhousie can expect a grilling if they hope to get a licence to work in Ontario, Fefergrad said.

That means Dalhousie students will be expected to provide confirmation they are not one of the 13 students, Fefergrad said.

“There’s no room in the health care system for this,” Fefergrad said. “Zero, zero, zero.”

Fefergrad stressed that the letter was written by the full executive committee of the College, which administers licences for Ontario’s 9,500 dentists.

“This is something that really caused great concern,” Fefergrad said, stressing that moral fitness is essential for anyone applying for a dental licence in Ontario. “The conduct is deplorable,” he said. “We have one responsibility, and that is to look after the public interest.”

He stressed that universities can grant degrees in dentistry, but they cannot issue licences that make it legal to practise.

“They would have to apply to a regulatory body to get their licences,” Fefergrad said.

Dalhousie announced Monday morning that it has partially suspended the 13 dental students, nearly a month after women complained about the violent anti-women comments they posted on Facebook.

“The suspension is necessary to ensure a safe and supportive environment for patients and classmates who participate in the clinics,” said a statement issued by the university’s president and dean of the Faculty of Dentistry.

The students were due to resume classes Jan. 12.

In an updated Q&A on its website, Dalhousie explained what the clinical suspension means:

“They will not work with the public or directly with classmates in that setting. Students in Dalhousie’s DDS program are required to complete work in clinic as part of their degree requirements.”

The decision was made Dec. 22, the statement said.

“This is a very complex matter and we must take the time necessary to gather information, follow a just process and to make informed decisions. Key individuals were away until Dec. 21.”

As well, the university said, “all the students in question had left campus by Dec. 22,” and the university wanted to make sure “students had appropriate in-person support when the suspension decision was delivered to them, including information, counselling and other support services.”

The university said it first heard of “the offensive posts” on Dec. 8, from an affected student. The story was first reported to the public Dec. 15.

The university said it would hold a news conference later Monday to explain its response to the postings, which have generated widespread debate on how Dalhousie should handle the issue.

The Facebook page where the comments were posted has been taken down. According to the CBC, members of the Class of DDS Gentlemen page on Facebook voted on which woman they’d like to have “hate” sex with and joked about using chloroform on women.

In another post, a woman is shown in a bikini with a caption that says, “Bang until stress is relieved or unconscious (girl).”

“The university has made clear that there will be consequences for this offensive behaviour,” its statement said.

Four professors from the Halifax university also filed a complaint over allegations that male students posted sexually hateful messages about their female colleagues on Facebook.

In response, the school has launched a restorative justice process, an informal and confidential resolution procedure that includes the parties involved.

“That process is ongoing,” the statement said.

The partial suspension “will allow the Faculty of Dentistry Academic Standards Class Committee to consider the matter from the perspective of professionalism requirements,” the statement said.

“Its powers include the authority to create remediation plans where warranted and to recommend academic dismissal.”

The statement from university president Richard Florizone and dean Thomas Boran concluded: “We recognize that what has happened is not isolated to Dalhousie University. It is a complex societal issue about which our community cares deeply.

“While this will be a long, complex journey, it is a necessary one for us to lead.”

The Ottawa Dental WatchDog  should be more concerned with examples of extreme violence by their own female members who habitually assault their own children and partners.

Just because a female happens to be a medical professional does not mean that they are incapable of being psychopaths or murderers.

What these men was despicable and obscene. However it was in a private password protected page and there is some evidence to indicate that at least some of these men were "entrapped".  No criminal offences were committed and no one was physically harmed.

The women involved chose "restorative justice" an intelligent decision that the extreme feminists and man haters can't accept and who want guts for garters.

These particular men, even if they graduate will now have permanent stains to their reputations that may well make it next to impossible for them to practice anywhere in the future.

If these men deserve any punishment there needs to be some consideration for what is necessary and in the public interest.

The University could have asked for some psychological testing, a risk assessment by professionals of their risk of harm to anyone in the future.

The same reasoning does not apply to the Violent Female Medical Professionals who would be guaranteed to show up on testing as psychopaths and or present severe risks of harm to society but, continue to practice as medical professionals simply because of their female Gender.

What's good for the Gander is often the complete opposite for the Goose.

Check out the pages at the Ottawa Mens Centre