Premier Kathleen Wynne is finally getting an audience with Prime Minister Stephen Harper, more than a year after their last meeting. 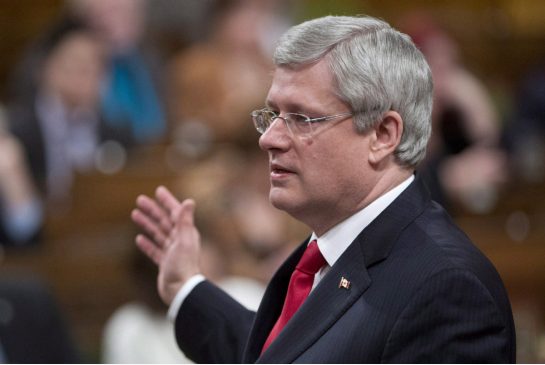 By: Robert Benzie Queen's Park Bureau Chief, Published on Mon Jan 05 2015
After months of pleading and cajoling, Premier Kathleen Wynne is finally getting an audience with Prime Minister Stephen Harper.
With Harper headed into a federal election later this year — and his Conservatives dependent on holding Ontario seats to retain government — he agreed to sit down with Wynne.
It comes 396 days after their last meeting on Dec. 5, 2013 in Ottawa.
Wynne’s office confirmed the two most powerful politicians in Canada were to sit down Monday night at 6:15 p.m. in an undisclosed Toronto location.
Their tête-à-tête comes following Wynne’s complaints the prime minister was shunning the country’s most populous and important province.
Last month, the premier admitted to the Star that perhaps she could have handled the tiff better.
“I wish the kind of personal tension hadn’t entered into it because, really, I don’t have personal antipathy for Stephen Harper. That’s not what this about,” Wynne said in a year-end interview.
“I truly believe that it shouldn’t be about the personalities. It should be about the two offices that have such responsibility having a good working relationship,” she said.
“That part I find unfortunate because it’s not personal for me; I hope it’s not for him.”
In the heat of last spring’s provincial election campaign, Wynne repeatedly attacked Harper in a bid to link him to then Progressive Conservative leader Tim Hudak.
Notably, she confided to the Star that during their last 2013 meeting, the prime minister had “smirked” during a discussion on pension reform and said Canadians should save for their own retirement.
Harper’s office strongly disputed her interpretation of the closed-door session.
“Ms. Wynne is misrepresenting the meeting; it did not transpire the way she says it did. Also, if you look at her public comments afterwards at the time she clearly felt it was productive and she said she felt optimistic,” the prime minister’s chief spokesman Jason MacDonald said last May 8.
To punish the Ontario premier, Harper repeatedly rejected all her appeals for a meeting — even after she won a majority on June 12.
Instead, he found time to sit down with politicians as disparate as newly elected Toronto Mayor John Tory, New Jersey Governor and Republican presidential hopeful Chris Christie, and seemingly every other provincial premier as well as dozens of foreign leaders.

Stephen Harper might like to start with demanding an explanation for Ontario's Billions of Dollars spent on promoting its Gender Superiority Program that promotes domestic violence towards children and fathers spent directly on Ontario's Criminal Cartel of 54 unaccountable private corporations called the Children's Aid Societies of Ontario.

Harper should speak to Wynne about MARGUERITE ISOBEL LEWIS
Ontario's most notorious Criminal Child Abuser and Fabricator of Evidence
employed as a lawyer with the Children's Aid Society of Ottawa.

Most importantly, he should tel Wynne to forget her plans to appoint
Marguerite Lewis as a judge of the Ontario Superior Court.

Even more importantly, Harper should get on the phone and demand that Wynne Fire this professional Child abuser who Fabricates Evidence that effectively promotes extreme violence towards children and fathers who happen to have the misfortune to be victims of Ontario's promotion of Violence by women to children and fathers.

Kathleen Wynne is a Fas.cist Governor of the Feminist State of Ontario where Fathers have no legal rights.

Kathleen Wynne is the epitome of extreme feminist support for Ontario's Billion dollar Criminal Organization that promotes murder and domestic violence towards children and fathers.

Kathleen Wynne has no respect for the Rule of law in that its her corrupt liberal government that "anoints" as judges Former CAS lawyers like Timothy Minnema who personally fabricates evidence to assist the most violent of female child abusers.

Kathleen Wynne turns a blind eye to abuses by Ontario Authorities who have absolute Power because WYNNE, is corrupt and supports Fascist Ideals.

Harper, a Father needs to develop some empathy for 50% of the Ontario Population who have no legal rights and who are subject to the Gender Superiority Program of Kathleen's Wynne's Liberal insult to justice.

Stephen Harper will have an opportunity while flying to Toronto to grab a sick bag from the Challenger.

The Ottawa Police started an investigation and concluded "She lied to the judge, its perjury", that investigation came to a hault when another CAS lawyer, Tracey Engelking obstructed justice by having a phone conversation with the detective John Gibbons who promptly dropped that investigation as he did with several other investigations at the direct and or indirect request of Ottawa's Branch of Ontario's mega-Billion dollar Criminal cartel of Children's Aid Societies.

Mr. Harper spare a thought for the 50% of Ontario residents who happen to be male and the subject of Wynne's Fascist Program of Gender Superiority.