CLEVELAND -- Nearly four weeks ago, Ricky Jackson was exonerated after spending 39 years in prison -- serving the longest sentence for a wrongful conviction in U.S history.

In 1975, on a street corner in Cleveland, Ohio, a money-order salesman was robbed and shot to death as he left a neighborhood store.

Five days later, the police had three suspects in custody. One of them was 18-year-old Ricky Jackson, the alleged trigger-man. 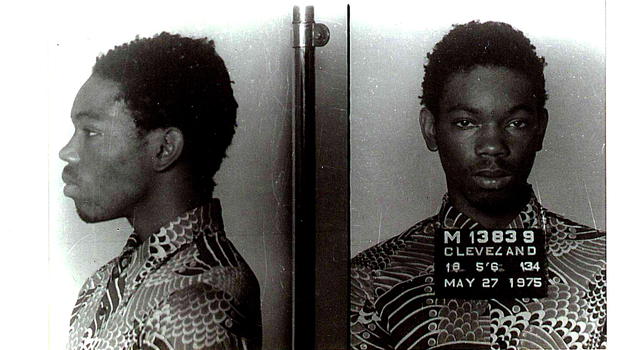 A mugshot of Ricky Jackson after his arrest for a murder he did not commit. Jackson was exonerated after 39 years behind bars.
Cleveland Police

"I can remember that day so vividly because that was the last day that I felt like I was really alive," Jackson told me, with tears in his eyes.

In 1975, Jackson and two friends were sentenced to death.

"We were innocent, and they were about to murder us for something we didn't do," Jackson said.

No physical evidence linked the men to the crime, but the police had an eyewitness: a 12-year-old boy named Edward Vernon.

Young Vernon testified under oath that he saw Jackson pull the trigger, even though he was several blocks away on a school bus when shots rang out.

In this 1975 photo, a crowd gathers at the corner store in Cleveland, Ohio where the murder of a money-order salesman took place
The Plain Dealer

"They knew that I didn't see anything," Vernon told me, now 52-years-old. "Everybody knew it was a lie."

I spoke to Vernon with his pastor at his side.

"All these years I've been holding this shame and guilt inside, wanting to release it, wanting to come forward and do the right thing," said Vernon.

Vernon said he fingered Jackson because he knew him from the neighborhood and was eager to help police. But after he failed to identify Jackson in a line-up, he says the officers began to feed him information: the number of assailants, the weapon used, and the make and model of the get-away car.

But Vernon told me he saw none of those things. He was simply repeating what the police had told him, he said.

It was Young Vernon's testimony that put Jackson on death row.

"I could halfway accept my punishment if I was guilty," Jackson told me, before breaking into tears.

"I said 'I'll be with you, I'll support you,'" Singleton said. "He just bust out crying, it's like something just came out of him."

The Ohio Innocence Project asked for a new trial. Vernon took the stand in a Cleveland courtroom and this time he told the truth.

It's been seven weeks since Jackson, now 57, walked out of court a free man after his murder conviction was overturned. He's spent all of his adult life behind bars. 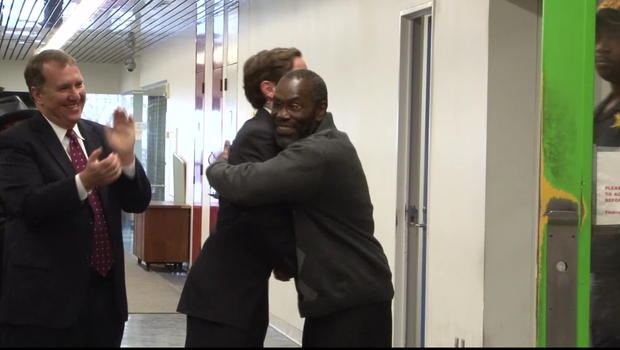 Today, Jackson is reclaiming his life -- studying for his driver's test and signing up for a library card. But there was something else he needed to do: forgive the man who put him behind bars. The emotional moment happened inside a church where both men hugged one another.

"It took a lot of courage to do what you did," Jackson told Vernon. "Thank you man."

"It's all right brother. We were both victims man. It's alright. I do forgive you man. I wanted to be here personally to tell you that."

Vernon, who was so overcome with emotion he could barely speak, marveled at Jackson's ability to forgive.

"Wow, how could this man hug and embrace me after all these years?" Vernon wondered. 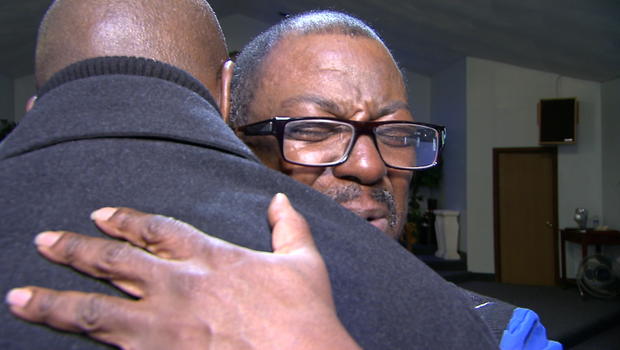 Ricky Jackson hugs and forgives Edward Vernon, wearing glasses, for lying about a murder that sent Jackson to prison for 39 years
CBS News
Jackson told me, he didn't always feel this way about the man who put him behind bars.

"For a lot of years I really hated him for what he did to us," Jackson said. "But I knew I had to do this because I desperately want to move forward with my life and the only way I can do that is to forgive him."

Two men imprisoned by a lie, set free by the truth.

Another classic example of just how easy it is for Police to fabricate evidence and deny justice not to mention torture a man for 39 years.

just to name a view of the Criminals who habitually commit offences against the administration of justice.

Checkout the wanted pages at