Chief Bordeleau: ‘We live in a safe city’ 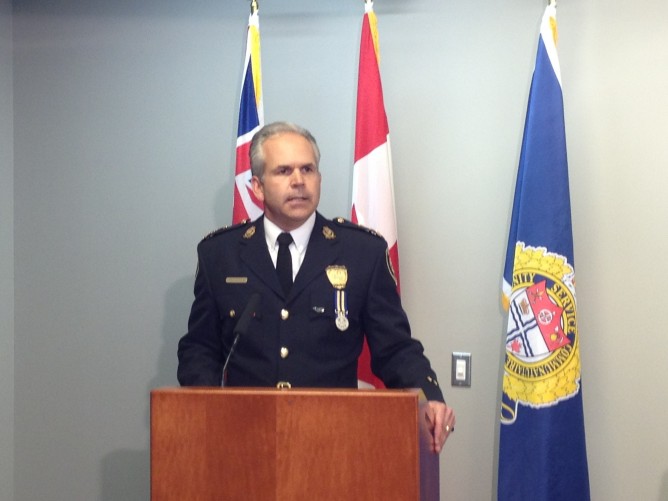 OTTAWA — After a record-high number of shootings in 2014, Police Chief Charles Bordeleau has spoken out in an open letter, claiming Ottawa is a safe city.

We live in a safe city. However, as police, we recognize that there are fluctuations in crime to which we must be prepared to respond.

While reported crime is down, there has been an increase in targeted, street gang-related shootings. These incidents have taken place across the city, in various neighbourhoods, and with the common linkage being the illegal drug trade, the availability of hand guns, and the increased willingness of street gang members to use them.

I recognize the concern in the community about these shootings. There is always a threat that these targeted shootings can result in an innocent person being struck.

Preventing this activity, arresting the individuals responsible, and ensuring they are held accountable by the court system continues to be a top operational priority of the Ottawa police.

But while the focus of the Ottawa police is squarely on enforcement and proactive policing, we know that the solutions to this issue rest with the community at large. Those longer-term solutions include continued and increased police focus but also increased focus from community agencies who can assist in steering people away from, or out of, the gang lifestyle.

We are responding to these incidents with an increased enforcement strategy that will hold offenders accountable. We have doubled the number of investigators in our Guns and Gangs Unit and we have members in Patrol, Districts, and the Drug Unit focused on investigating, identifying, charging, and keeping close tabs on known gang associates and prolific offenders.

I am confident in the officers working to deal with this increase. They have been doing excellent work on this issue. In 2014 alone, 83 gang members and associates were arrested with hundreds of charges laid.

More than 50 crime guns were seized by Ottawa Police in 2014 and more than half of those were handguns. According to provincial statistics, about 60 per cent of crime guns in Ontario are foreign-sourced and smuggled into Canada often originating in the United States. About 20 per cent are domestically sourced and another 20 per cent have no known origin.

Even after individuals are charged, our police work is often not done. In  cases where individuals have been released on court conditions, our Direct Action Response Team officers conduct hundreds of compliance checks to ensure they are keeping to those conditions. In 2014, 29 street gang members or associates were found in breach of conditions and arrested.

About two years ago, we began a discussion on a city-wide gang strategy that includes enforcement but also supports and help for individuals and families vulnerable to the gang lifestyle.

Through our partnerships with Crime Prevention Ottawa, we are supporting the Ottawa Gang Strategy which is designed to help prevent or curtail future gang membership. For example, we are working with the Children’s Aid Society and community partners like the John Howard Society and You Turn to reach out to younger siblings of gang involved youth to break the cycle of violence in families.

The Youth Services Bureau is building a Trades Centre to offer training, employment possibilities and hope to youth involved with the law who are currently making money illegally but need new, realistic sources of income.

There have been hundreds of people involved in information sessions and relationship building exercises to develop a more positive understanding between the criminal justice system and immigrant communities.

We are also looking at ways to address gaps in supports such as the need for support for offenders who come out of jail with the gang lifestyle as their only perceived option.

A great amount of work still needs to be done and our officers are committed to the task of protecting community safety.

Mein Kampf gives lots of good advice about Propaganda and our Ottawa Police Chief was not made chief for his lack of the gift of the silky smooth gab.
.
Propaganda requires "diversions" from the real issues, so our Chief talks about "Guns and Gangs" which is really a small part of the Ottawa Police.
.
The largest , around 75% of the Ottawa Police is spent Promoting Hatred, Promoting Violence, Promoting Murder of FATHERS by women who are treated as sacred cows by the Ottawa Police while men, are treated as criminals.
.
The Ottawa Police operate with a Fas.cist Doctrine of Gender Superiority that
is part of Ontario's decades of Extreme Feminist Legislative changes that have slowly
removed from fathers almost all legal rights.
.
The Ottawa Police put on a show, a veneer surface of legitimacy while the vast amount
of their efforts, of their budget, is spent, on Promoting Violence by women towards Fathers.
.
They work with and take direction from Ottawa's Gestapo, thats the name given to
the Children's Aid Society of Ottawa by local lawyers.
.
These Two Criminal Organizations bring the administration into ill-repute, they undermine the justice system with their "own judges" who are generally former CAS lawyers or the underbelly
of society who the Government believes will make political decisions rather than legal decisions.
.
The Police Chief has just one liability, he is male, and its now only a matter of time before he too
is replaced by a female who will appear to be more politically receptive.
.
What the Ottawa Police need to remember is that what goes around comes around and its only
a matter of time that the male members of the Ottawa Police become victims of the hatred that they promote.
.
Any why should the Male members of the Ottawa Police worry?
Well they should already know, that in Ontario 99% of children in custody cases are placed
with mothers, even when they are extremely violent and psychopaths and its those
personalities that are attracted in droves, of both genders, to apply and be accepted as
Police officers.
.
It's no wonder that the Ottawa Police have a considerable number of "burnouts" who
reach their limit of being part of a Criminal Organization and leave for less degrading work.
.

Chief Bordeleau is a master at propaganda.
.
He needs to be with a Corrupt Evidence Fabricating Police Force
that believes it is above the law.
.
Across Ontario, one only needs to look at the incredible number
of Police wearing “Safety Vests” that are the tell tale sign of
“Paid Duty” that is in reality, Financial Extortion by Police at exorbitant rates
when the same work should be and could be done by construction workers and or
private security contractors.

Ottawa Police lay an incredible number of charges that never result in convictions.
.
The also arrest an incredible number of people who are never charged.
.
Those two groups are largely composed of Male Victims of Domestic Violence
to satisfy the need for “statistics” to justify their Promotion of Hatred and Violence
against Fathers when, many of them are in fact fathers.

To justify those charges, the Police make it as difficult as possible for anyone to
hold them accountable.

First, they have their own “favorite Judges”, that get assigned to their most difficult cases,
.
That means the Police can and do, fail to provide “Stincombe disclosure” obligations.
.
It gets worse, they habitually fail to comply with those orders because “Their Judges”
will do nothing about it.
.
When Judges make orders for the Police to disclose, the Ottawa Police effectively
give the court the finger and laugh.
.
Then when they do disclose, they leave out the very evidence that know will exonerate
the accused.

.
When evidence is NOT disclosed, it is often a key indicator that the Police were engaged
in a Criminal Offence and they don’t wish to have that seen in court.
.
The Police have a very Negative and distorted idea of Justice that revolves around
them getting Promotions, as did Detective Peter Van Der Zander after he was caught
Fabricating Evidence.
.
The Ottawa Police Chief when provided with that evidence directly, immediately dropped
it on his deputy to write a PO letter.

The OIPD refused to investigate and despite the matter being in front of a long list of
Ottawa Judges, not a single Judge made a comment regarding the Criminal offences
committed by Det. Peter Van Der Zander.

The Ottawa Police are a Criminal Organization, and with a Chief who is an expert at Propaganda
the abuses both legal and financial will only escalate.

The Ottawa Police have a Criminal Code of Silence, and should ever any officer actually
give evidence that incriminates another, he or she will be shown to the door even it takes a few years to engage in terror, bullying, intimidation and isolation that end up making those they don’t like leave the Ottawa Police.

The Worst Rats remain in the Ottawa Police the longest time and are rewarded with promotions.
The Ottawa Police make it very clear that officers are required to make “entries” in their confidential data base that reads like a Secret Police Neighbor reporting crap about their neighbours. Its riddled with fabrications about almost anyone and everyone in Ottawa.

Its a file that NO one other than an Ottawa Police can view and it is NEVER disclosed.
If officers make “contributions” above a certain level, then the are eligible for promotions.

IF you happen to see and Older Ottawa Police Officer with a lower than normal rank,
it may speak highly of his ethics and his refusal to play what is called “Old School Policing”.