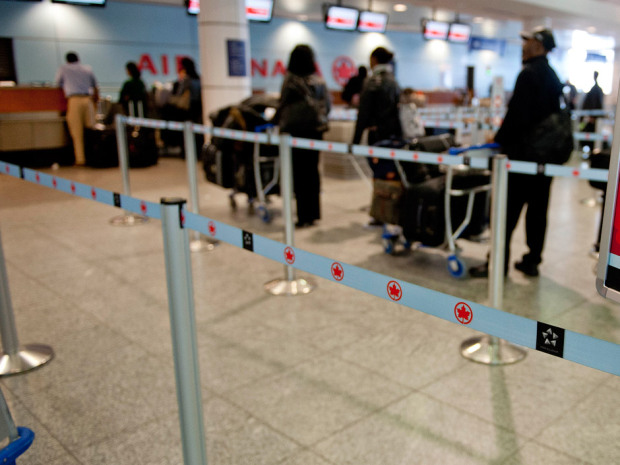 The RCMP’s anti-terror squad on Friday arrested and charged two Ottawa men with terror-related offences, one as he was boarding a plane.

Carlos Larmond, 24, was arrested at Montreal’s Pierre Elliott Trudeau International Airport as he was intending to travel overseas for terrorist purposes, the RCMP said.

He has been charged with participation in the activity of a terrorist group and attempting to leave Canada to participate in terrorist activity abroad.

The arrests were made by the RCMP Ottawa Integrated National Security Enforcement Team (INSET) with the help of Ottawa Police and the Ontario Provincial Police,.

Assistant Commissioner James Malizia, who is in charge of the RCMP’s Federal Policing Operations, said: “Today’s arrests speak to our ability to tackle a threat that is multifaceted and constantly evolving. Through collaborative efforts with our partners, we were able to prevent these individuals from leaving Canada to engage in terrorist activity overseas.”

Congratulations to the RCMP on these arrests that must have been a long time in the works.

The tragedy is that the RCMP do not have jurisdiction in Ottawa to deal with an equally dangerous but more difficult and insidious type of terrorist that can be called "Domestic Terrorists" who should not be allowed into another countries.

There are a number of "Domestic Terrorists" who effectively promote Murder, extreme violence and worst of all, child abuse that is worse than sexual abuse.

Ottawa is literally crawling with Domestic Terrorists and you can read about them at the link at the bottom.

Peter Van Der Zander is typical of the promotion and practice of Domestic Terrorism by Fabricating Evidence NOT to charge the most violent of female criminals.

Recently he Fabricated evidence NOT to charge a violent female who tried to strangle to death, the full time father of their children simply because of Domestic Terrorists like the Ottawa Police who openly promote terrorism of fathers.
The officers told Van Der Zander the father was found bleeding around the neck with scratch marks around the neck, and that she had pulled his head by the hair down on to a couch and used to two hands to stop him breathing.

Van Der Zander Fabricated an Occurrence Report that claimed she denied pulling his hair or choking him however the Video Interview shows that he never asked her those questions and she never made such a denial.  Van Der Zander claimed that her assault was "a Reflex Action", and after expressing concerns that she might kill him with knife he released her with a warning that "next time" grab your kid and call 911 and the police will deal with him.

He then sent her home in Police vehicle with a female victim support worker and kept the Victim of the attempted murder and or assault incarcerated for most of a day.

When Domestic Terrorist Peter Van Der Zander finally interviewed the father, he refused to photograph his injuries and without any evidence or reason accused him of being a pedophile.

At the same time, he removed the children from the father's care and placed with the violent mother who had been previously arrested and charged with assaulting the father with supervised access to the children.

Van Der Zander's Superior Sgt. Isobel Granger removed Van Der Zander from the file, but knowing he Fabricated evidence refused to have an review of his Fabrication of Evidence.

The Ottawa Police were given Audio Recordings, hundreds of medical reports and Reports to a lawyer, photographs of injuries many taken by doctors and at even at Police Headquarters at 464 Elgin Street. These detailed literally hundreds of assaults over the previous 5 years.

Six months later an Ottawa Crown Attorney screened charges by another Ottawa Detective and on just one sample day, she was charged with Death Threats and assault for some 55 assaults that occurred on just one day.

The Children's Aid Society of Ottawa stepped in and had the Head Crown Attorney, TARA DOBEC step in and STAY the charges.

TARA DOBEC is typical of why we have Domestic Terrorism in Canada. A corrupt Crown Attorney STAYS charges against the most violent of Female offenders simply because she assaulted a male when she prefers to Prosecute Male Victims of Domestic Violence.

There is hardly a criminal or family lawyer in Canada who can not tell you hundreds of similar stories of how the Police and Prosecutors in Canada of similar Domestic Terrorism directed against full time fathers in a Gender Cleaning Program that in Ontario is results in around 99% of custody cases being given to women, even when they are the most violent.