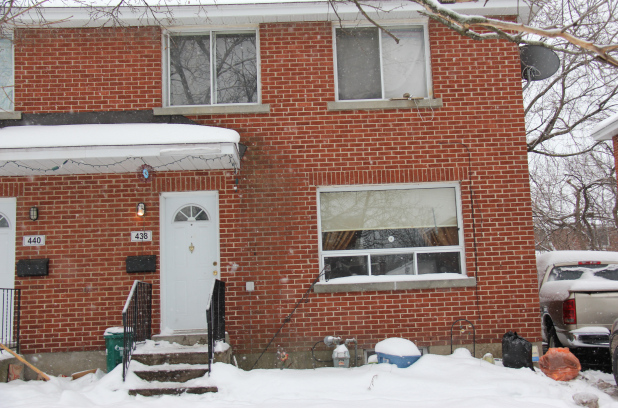 Neighbours of two brothers in Vanier say they are surprised the pair were charged by the RCMP with terrorism-related offences over the weekend in what the police describe as a lengthy national security investigation.

Twin brothers Carlos and Ashton Larmond, both 24, appeared in court on Saturday to face the charges which their lawyer, Joseph Addelman, said he will “vigorously defend.”

Carlos was arrested at Montreal’s Pierre Elliot Trueau airport Friday “as he was intending to travel overseas for terrorist purposes,” RCMP said. Ashton was arrested in Ottawa.

Neighbours of two brothers in Vanier say they are surprised the pair were charged by the RCMP with terrorism-related offences over the weekend in what the police describe as a lengthy national security investigation.

Twin brothers Carlos and Ashton Larmond, both 24, appeared in court on Saturday to face the charges which their lawyer, Joseph Addelman, said he will “vigorously defend.”

Carlos was arrested at Montreal’s Pierre Elliot Trueau airport Friday “as he was intending to travel overseas for terrorist purposes,” RCMP said. Ashton was arrested in Ottawa.

The men lived inside a duplex on King George St., according to neighbours.

A woman inside the home said “Go away” through the locked door Sunday afternoon. A video camera perched on the outside of a second storey window pointed toward the front door.

One neighbour who did want to be identified told Metro the men were “very, very friendly” and lived with an older woman. He said he would see the Larmond brothers play sports on the street.

“I hope they are only suspects. They are very friendly people,” the neighbour said.

Another neighbour, reached by phone Sunday morning, did not want her name published.

Both neighbours who spoke to Metro said the two accused converted to Islam recently and noticed they had started wearing traditional clothing worn by some Muslim men.

“I know that they converted into Muslims. That was like a couple years ago,” said the neighbour in a telephone interview.

Before she noticed their apparent conversion, the neighbour told Metro she would often see the twins playing basketball in the driveway in front of their home wearing “sporty stuff.”

Recently, she said she noticed their clothing changed as they each wore a “white gown.”

The brothers’ lawyer, Joseph Addelman, said both brothers are Muslim, but he would not elaborate on how religion and freedom of assembly were factors in the case. He said he has represented them in the past.

He said their arrest came as “a surprise to me and to them.” Their next court date has been scheduled for Feb. 15 in Ottawa.

Addelman said he could not disclose his client’s previous charges, but that they were “relatively minor.”

In the wake of the recent deadly terrorist activity in Canada and around the world, Addelman said police were “out there looking to lay these charges.”

“This is the new craze right? This is what our police are into,” he said.

Ashton Larmond has been charged with:

Carlos Larmond has been charged with:

Addelman would not comment on where Carlos Larmond was allegedly planning on flying. He said the rare and “very serious” charges, which could lead to life imprisonment, had come as a shock to him and his clients.

“There’s not many (people charged with terrorism-related offences) out there. People can get big, big sentences,” he said.

The case would be about determining “how much value the Canadian system truly places on freedom of expression, freedom of assembly and freedom of religion,” Addelman told reporters outside the courthouse Saturday.

“All Canadians have the right to express their religious beliefs and to participate in free assembly without that being a criminal offence,” he said.

Both Ashton and Carlos Larmond appeared individually in court on Saturday via video link. They were each instructed not to contact the other while in custody at the Ottawa-Carleton Detention Centre.

Both Ashton and Carlos Larmond played hockey for the Platt Hockey League, based in Gatineau, Que.

Ken Platt, who runs the league, told the TorStar News Service Ashton had started playing for the league in September and participated in five or six games before quitting.

“He seemed like a nice guy, and a polite hockey player,” said Platt.

Carlos joined the league after Ashton quit and also played five or six games. Platt says they never met, but he was a “not-so-good” hockey player.

Safwan Choudhry, media spokesman for Stop the Crisis, a group set up to fight youth radicalization in Canada, said he was relieved that “our authorities are being proactive and catching suspected individuals.

“We are relieved to know our security services are doing their part to catch and diffuse any situation prior to it happening.”

Choudhry was not personally aware of the Larmond brothers, but said their arrest was part of an ongoing investigation by RCMP.

“These two were part of that. We are not sure how big it is,” he said

In Paris, Public Safety Minister Steven Blaney said the arrests of the Larmond twins were not connected to the terror attacks in the French capital this week.

With files from TorStar News Service and The Canadian Press

While these two arrests of alleged terrorists, make headlines, other more serious
Domestic Terrorists with a real probability of a conviction, escape any arrest, any prosecution because of their position in society.

Ottawa Police Detective Peter Van Der Zander terrorizes victims of serious criminal offences while Fabricating Evidence NOT to charge the perpetrators of the most serious forms of domestic violence.

The Ottawa Police virtually Terrorize every Full Time Father in Ottawa as there is hardly a father in Ottawa who does not know that if he calls 911 because his wife is assaulting him, that HE will be arrested.

The 3rd Reich targeted the Jewish people, the Province of Ontario pursues a policy of Gender Cleansing, Gender Superiority that costs billions of dollars to enforce, litigate and incarcerate in concentration camps for those in Ontario who by accident of birth were born male.

The Ottawa Police not only ignore terrorist style offences by their own Rotten Cops like Detective Peter Van der Zander, AFTER his superiors KNEW he fabricated evidence and obstructed justice, this dropout got promoted.

If you are a psychopath with a propensity for abusing the victims of abuse, and a talent for Fabricating Evidence and or Obstructing Justice, the Ottawa Police
are looking for people just like to join the ranks of Ottawa's 400 Million Dollar a year Terrorist Organization.

In Ottawa there is a Female Terrorist by the name of Marguerite Lewis.
She is  often found covered from shoulders to foot in her robes that indicate she is a lawyer, an officer of the court who represents the Ottawa Branch of Ontario's Criminal Cartel of unaccountable Private Corporations under a monopoly contract to provide "Child Protection Services" .

Marguerite Lewis is perhaps one of the scariest most dangerous people who have NOT YET been charged with any criminal offence simply because we have a Cor.upt Ottawa Police who are their partners in crimes of Terror.

This disgrace to humanity Fabricates Evidence to abuse children and the victims of female domestic violence.

Across Ottawa there are droves of Fathers who are male victims of domestic violence by violent women who are encouraged by the Billions of Dollars of Free Legal help for Violent Women provided by lawyers like Marguerite Lewis who personally Fabricate Evidence.

Marguerite Lewis is in turn encouraged to commit these Terrorist Crimes by Judges like Timothy Minnema, a former lawyer for the CAS who now as a judge personally fabricates evidence and turns a blind eye to blatant fabrication of evidence by his former fellow and sister lawyers of the CAS.

The Ottawa Gender Apartheid Police also turn their attention towards male victims of domestic violence even when they are members of other police forces.

The City of Ottawa is a very dangerous place to be a full time father. The Ottawa Police and their fellow terrorists at the CAS actively remove children from male victims of domestic violence and give them to violent mothers as quickly as feminine fingers can dial 911.