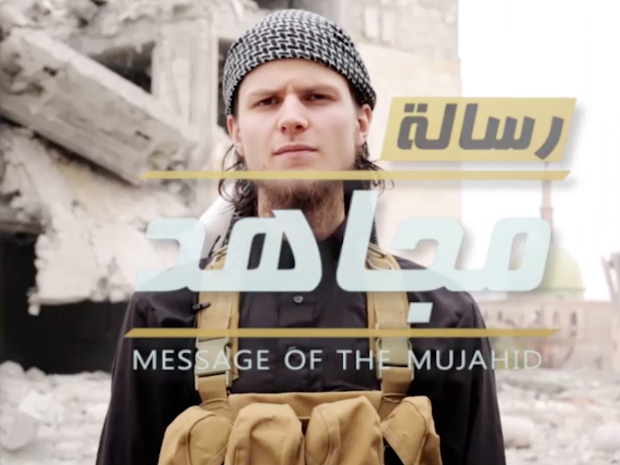 John Maguire, a former University of Ottawa student who converted to Islam and became radicalize

John Maguire, who dropped out of the University of Ottawa to join ISIS and starred in a jihadi propaganda video threatening attacks on Canada, is dead, a pro-ISIS Twitter account says.

The message claims Maguire, 23, who went by the name Abu Anwar Al-Canadi, was killed in Kobani, northern Syria. The circumstances of his death were not detailed.

Ottawa’s Maguire was a recent convert to Islam who once aspired to playing in the NHL. He traveled to Syria where he took up arms under the banner of the Islamic State of Iraq and Al-Sham, known as ISIS.

“You either pack your bags, or prepare your explosive devices. You either purchase your airline ticket, or you sharpen your knife,” he said in the video.

The six-minute video said Canadians would be indiscriminately targeted and that Muslims were obliged to either join ISIS or “follow the example” of the attackers who shot a soldier in Ottawa and killed a ran a soldier down in Saint-Jean-sur-Richelieu, Que.

He had dropped out of the University of Ottawa and became radicalized before vanishing in 2012.

A Twitter account under the name Abu Saman, identified as a pro-ISIS feed from Syria, sent a notification Wednesday that Maguire was dead, according to a translation from the Arabic by the Washington-based Middle East Media Research Institute.

Killed alongside Maguire, according to the message, was a man identified as Abu Sa’d Al-Dagestani. He gained world-wide notoriety this week when identified as the man in an ISIS video purporting to show a young child executing two men

The video says the men were “agents recruited by Russian intelligence.”

The staged broadcast shows the men “confessing” and then, after a cutaway, a scene of them kneeling in the desert. A man and a boy, appearing to be about aged 10, are with them and the boy appears to shoot the men in the head.

This was an example of good decision making by the Canadian Government to let him go on a one way journey.

Unfortunately, the decided to grab, 3 Ottawa Men who were about to do the same thing. All Canada had to do was wait a few weeks or months and they would be dead too.

The problem is Politicians ordered the RCMP to make the arrests for badly needed political brownie points instead of using logical reasoning of balancing the value of the pipeline that they were effectively severing.

It's boggles the brain that the Government can be so short sighted and willing to cause long term harm by borderline selfish behaviour that is typically shown by most politicians and that's another story.

The Federal Government has another more dangerous risk of "Domestic Terrorists" that is habitual, generally insidious because our gutless politicians remain blind, deaf and dumb when it comes to dealing with the vilest example of Criminality in Society today.

The Ottawa Police are very family with OPS File No. 13-7254, that of Obstructing Justice and Fabricating Evidence by one Marguerite Lewis, a lawyer no less, an officer of the court, in "Child Protection" for the "Children's Aid Society of Ottawa".

Detective John Gibson of the Ottawa Police reviewed documentary evidence of transcripts and concluded "She lied to the judge, It's perjury".  Later he stopped the investigation after having a phone call with another criminal, lawyer Tracey Engelking of the CAS Ottawa who, can at the snap of her little
finger, get illegal, "ex-parte orders" for custody of children, which is the
Criminal offence of "obstruction of Justice".

Marguerite Isobel Lewis belongs in Federal Prison and yet, she gets her criminally corrupt requests rubber stamped by the a group of judges who are going to be asked to retire in disgrace.

Justice Jennifer Belishen a former lawyer for the CAS.

Justice Timothy Minnema a former lawyer for the CAS

Justice Maria Linhares Desousa a former lawyer for the CAS